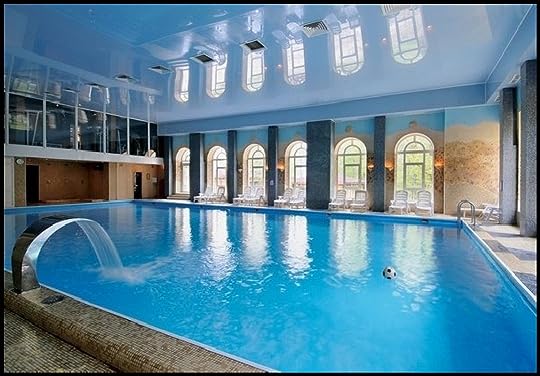 Thomas flexed his muscles slightly as he settled lazily poolside, yawning tiredly. He blinked his eyes and got up slowly, sliding into the pool. He came here early in the morning on purpose, because no one was here. Of course he was a social butterfly, but at times he enjoyed being on his own. His morning swims were an example of these times.

reply | flag *
message 3: by [deleted user] (new)
May 31, 2013 08:16AM
Mercy entered the pool, shutting the door very quietly behind her. She woke up from another nightmare, the one where she woke up and everyone had disappeared. She searched for weeks and there was nobody. Just Mercedes van Belisle. Slowly, she turned around but jumped when she noticed the boy. What was he doing here? Most people didn't come to the pool this early- especially on weekends. Mercy swallowed, contemplating what to do. She could do the usual and say hello? Or she could turn around and go back to her dorm, maybe hang out with a few friends for a while.

'Well, well, well, I have a visitor.' Thomas was smirking at this point, being that he was a bit of an arse ninety percent of his being. Flexing his muscles, he slowly stood and strode over. 'Hello, sweets. What brings you here this early in the morning?' Thomas questioned with a smirk, flexing his pec muscles as if he knew he'd have her swooning. He really wasn't a bad guy, he was just a bit of a ladies man and he knew it.

reply | flag *
message 5: by [deleted user] (new)
May 31, 2013 06:30PM
Mercedes frowned at the boy. He was very handsome, but he obviously knew it and was taking advantage of it. Being the sweet girl she was, Mercy changed her frown into a smile in a matter of seconds. "Well I was going to go for a swim, but it's obvious it has been occupied." A dimple showed on her left cheek, bringing on the adorableness of a young child. He seemed like a bit of a narcissist, something Mercy despised but her manners came first, putting up a front of sorts. Feeling slightly self conscious, she wrapped the towel a bit closer around her half-naked body.

'It hasn't been. I've just never seen you before.' As soon as she opened her mouth and spoke, he became disinterested and made his way back into his seat. This was his way of enticing them, causing them to become interested. He was a ladies man, alright, but he really wasn't a bad guy or anything- Thomas just knew the tricks of the trade. 'Sei molto bella, sai.'(view spoiler)[You are very beautiful, you know. (hide spoiler)] He said, gently to her in his native language. That was what usually charmed them, especially when they didn't understand. It was amusing to him, because many assumed that 'bella' was a reference to Twilight.

reply | flag *
message 7: by [deleted user] (new)
Jun 01, 2013 04:12PM
"I do speak Italian, you know. But thank you." Mercy smiled sweetly at the boy, and as he walked to sit on a lounge chair. Mercedes, with her towel still wrapped around her body, went to the edge of the pool and sat down, dipping her toes in. The water was crystal clear, but quite warm. Gently, she removed her towel and slid into the water. Even though Mercy had her insecurities, she needed to wash the memories of the nightmare from her being.

Thomas looked up at her words in surprise, flexing his muscles slightly as he smirked at her. 'Il tuo nome è Mercedes, giusto? Questo è meraviglioso. In modo da capire ogni singola parola proveniente dalla bocca?'(view spoiler)[Your name is Mercedes, right? That's wonderful. So you understand every single word coming from my mouth? (hide spoiler)] He was, and would always be incredibly sarcastic. Really, though, Thomas just wanted to see what her response would be. As she removed the towel his gaze darted to her petite, slim frame and he grinned sheepishly, enjoying the view.

reply | flag *
message 9: by [deleted user] (new)
Jun 01, 2013 05:35PM
"Sì, è corretto. Anche se sarei un bugiardo se dicessi che non mi stavo trovando questa conversazione interessante.(view spoiler)[Yes, that is correct. Though I would be lying if I said I wasn't finding this conversation interesting. (hide spoiler)]" She grinned at him and waded through the pool to the edge, closest to where he was sitting. Surreptitiously, she moved her body close to the perimeter of the pool so that her body was hidden from view. Mercedes scolded herself for choosing today of all days to wear her new maroon coloured bikinis. Her head tilted adorably to the side, her blonde hair pooling on the surface similar to that of a halo.

'Lei è molto attraente, giovane signora. Molto attraente. Il fatto che si è in grado di conversare con me nella mia lingua madre ti rende molto sensuale.(view spoiler)[You are very attractive, young lady. Very attractive. The fact that you are able to converse with me in my native language makes you very sensual. (hide spoiler)] Thomas was teasing her, of course. Although to him, she was very attractive, and intriguing. Especially the fact that she could keep up with him.

reply | flag *
message 11: by [deleted user] (new)
Jun 02, 2013 04:32PM
Evangeline flushed at his comment but continued the conversation with a flourish.
"Perché ringrazio, Signor ... posso chiedere che cosa il vostro nome è?(view spoiler)[Why thank you, Mr... may I ask what your name is? (hide spoiler)]" She moved her hand through the waters gently, ripples spreading through the calm surface of the water.

'My name, my darling, is Thomas, Thomas Vespucci.' He said with a certain Italian charm. 'My ascendant is none other then Amerigo Vespucci, the namesake of North America if you haven't guessed already.' He winked, charmingly.

reply | flag *
message 13: by [deleted user] (new)
Jun 06, 2013 04:10PM
Mercy smiled at his charm, refusing the urge to giggle. She didn't want to come across as a complete stereotype blonde and look like an idiot. "Well I am Mercedes van Belisle. My family is quite well known around the world..." She trailed off then returned her eyes to Thomas'. "I am the descendant of Leonardo da Vinci, the one and only." Mercy replied in a melodious voice, still wading through the water. It was a decent temperature, but she had to admit she was getting a little cold.