note: This topic has been closed to new comments.
21 views
Feeling Nostalgic? The archives > More Wii Warriors Are Playing Hurt

A video game offers a little exercise, a little fun and, for some, a little ache the next day.

Haven't had a chance to try it yet. Have you? 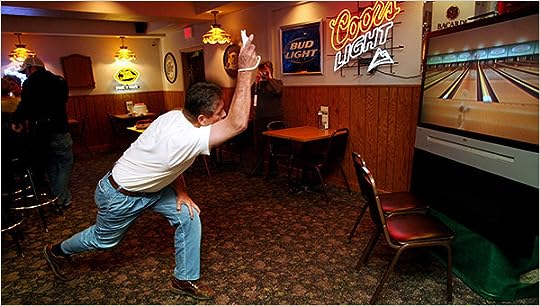 Yeah, its actually a lot of fun.

It's awesome, Larry. I definitely suggest giving it a go.

Agree with everyone, including the article. After it first came out, my arms were sore for WEEKS.

Okay, y'all talked me into it.

Boom Blox is another fun game but it makes my bad shoulder even worse.

Wow, Sarah, that does look interesting.

i have played it once and wasn't too into it. driving the cart thing. i do not do video games. not being judgmental, just not my thing

We got one for da kid's bday last summer, and she challenged me to a boxing match. I won... but I couldn't move my arms for a week. It's all about crazy random punching until your arms fall out of their sockets.

But, I've got the bowling down to a science. ;) Slow and calculated... that's my game.

here is what the "gamers" tell me: you don't really have to be so violent and intentional with your movements as the controller will work just as well if you sit in a chair and flick your wrist.

We have Wii! Lately the kids are into some Nascar driving game.

Sarah, my youngest and I play Lego Star Wars. I'm finally figuring some of it out. There's a lot of buttons on those controllers.

My middle son likes all the sports games...Madden Football, NBA basketball, etc. My oldest has "graduated" to games on the computer like Civilization.

We have Wii as well... I like the Lego Star Wars. The sports are fun with a group, but I don't think I've ever put that in when I'm alone... we have the Wii Fit too, which is pretty fun. It includes ski jump and heading soccer balls and downhill slalom skiing, and hula hooping, which is a pretty intense workout. I think they could do some pretty awesome things with the balance board if they keep working on it. I've heard good things about the new EA Sports fitness game that's coming out.

Nools wrote: "Agree with everyone, including the article. After it first came out, my arms were sore for WEEKS.

(I might have played a little excessively....)"
Me too....I suffered a shoulder injury and have to be very careful when I play now.

people - you are not swinging a sword in battle LOLOL

btw - i love the form of the guy bowling in the bar in the first picture. totally into it. nintendo is missing the boat not selling wii bowling shoes. they should make a smoke machine accessory that you can put in the room when you are doing wii bowling that fills the room with cig smoke so it really feels like you are at a bowling alley

It's true, Kevin, that you don't actually have to move your arms that much, but I am easily excitable, and I wouldn't call myself a "gamer." Example: When I first started playing the racing games (MarioKart 64? Yes?), I would physically tilt left or right every time there was a turn..... It's not that bad anymore. ^^;

In Boom Blox, you DO have to swing/throw hard. It judges the velocity of your swing.

I like Xbox for the Lego games, because there are extra achievments earned for the Xbox 360. It's like a whole other level of play.

Harry Potter and the Order of the Phoenix was better on Wii, though, because the spell casting was done with the Wiimote rather than a joystick (I have it for both platforms).

Is it weally called a wiimote?