120 views
Learning About Book Covers > A Touch of Grey 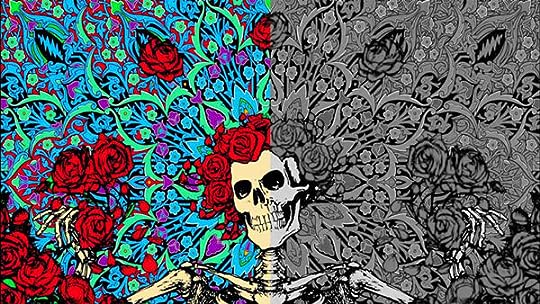 This post coincides with the recent last-ever concerts in Chicago by the Grateful Dead. I couldn't resist with the topic title (their top-selling song). But the topic is not about music. Or even the color Grey (or as I normally write it: Gray). Or even "Fifty Shades of…" :). Instead, this is about a valuable design trick that any author (or designer) can use when creating a book cover. I'm talking about…

Some background first. Most humans see the world via three color channels or receptors in the eye's retina. With the Additive Color System (the one used for projected light as with TVs or LCD/LED screens and monitors), the three primary colors are Red, Green, and Blue (or "RGB"). Colors printed on paper (like paperback books) use the Substractive Color System, which is different, although the main points below still apply in the image-making process.

Note that I said "most humans." Because some have different degrees of color blindness where they have either a red/green or a blue/yellow deficit. But all humans respond instantly to differences in "contrast." Contrast is the difference or "separateness" between two related things. But that's a general definition. In regard to book covers, we're talking about the contrast between the three main cover elements: main title, author's name, and background image. Yes, there can be other elements, too (subtitle, taglines, quotes, series number, etc.), but let's ignore those for now. If you want to catch readers' eyes—which is one of the main functions of a book cover—then you want to increase the contrast of the main elements. And the place to start is in the pairing of the cover's background with the title and author-name texts.

You have several options in trying to increase contrast between the background and these main text elements. You can make the text REALLY BIG. You can change the text fonts (style, weight, etc.). You can add drop shadows, panels, or outer glows. And you can play with your color selections. The latter is the focus of this post.

Study the image below: 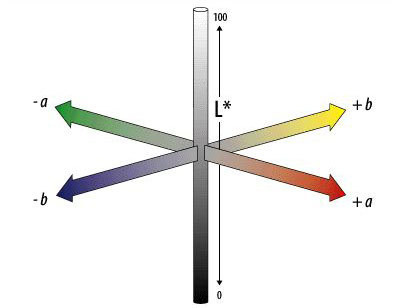 Every pixel in a digital color (RGB) image—what every online (color) book cover is—can be described by the LAB Color Space model shown above. It's a bit abstract, but what it means is that every color has three attributes: Hue, Saturation, and Brightness (aka Luminance or Lightness). The Hue is the color (is it red, purple, yellow?), and the Saturation is how "full" the color is—the farther to the outside, the "purer" the color is, the closer into the center, the grayer or weaker it is. Those two attributes are represented in the diagram above with the two "a"/"b" arrows. Don't worry about that right now because the next part—Brightness or Lightness—is the important thing.

How light and bright is the color? Or, putting it another way, what's the intensity of the electrons hitting the RGB phosphors on the screen you're viewing at each point (pixel)? If full strength, it's white or "100". If nothing (nothing hitting the screen), it's black or "0". That's the brightness range: 0-100. Every pixel of every RGB image falls somewhere along that range which is represented in the diagram by the vertical pole. That's the "L" in LAB. And that's all you see in a monochrome image, and that's the key to all this.

When you do the Grayscale Test I'm suggesting, you're stripping away the color information (the a/b stuff) from each pixel or point on the image and are left only with what's somewhere along the 0-100 L pole. That's Grayscale. 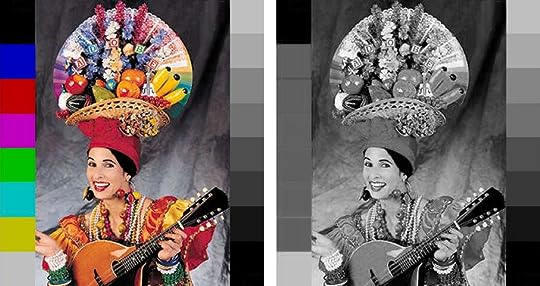 ABOVE: full RGB color at left, grayscale on right

Why Do Grayscale Testing?

Because our eyes sometimes fool us. And color can actually confuse things. The key to having a book cover design grab someone's attention is Brightness Contrast. And this Brightness Contrast is more easily seen when color images are turned into grayscale. To prove the point, let's look at a one-word, large-size title in different colors. And let's make them saturated "pure" colors. Like you see below with the same word in different standard colors on a realistic photo background. 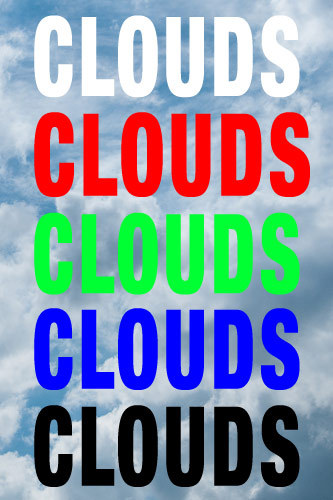 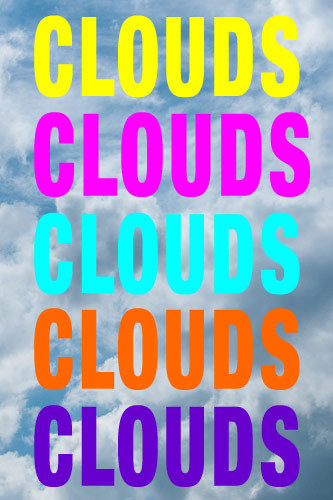 Above left are the main RGB Primaries in their "pure" forms: Red, Green, Blue (RGB!) plus White and Black. At right are the main "Secondaries" or "Complements": Yellow, Magenta, Cyan, plus I added an Orange and a Purple to round it out.

Squint your eyes or shrink your browser's View size and study them. If you have normal color vision, you'll probably notice that a few stand out (on THIS background image) with reasonably good contrast. For me, that includes the white, blue, black, and maybe the yellow. They have the most contrast with the background. But the others don't stand out as much; they don't have as much contrast. I'm looking at you, red, green, magenta, cyan, orange, and maybe purple. Something about those is not quite right. They kinda blend into the background. Sounds like it's time for the Grayscale Test to see what's really going on.

Grayscale is an old designer's trick. Like flipping a design horizontally to view it. Or squinting your eyes. But it's probably one of the best tools for reviewing your covers as they evolve through the creative process, whether DIYing it or using a paid designer.

So this is the trick: To check your initial thoughts or feelings about your text color selections, convert the cover image to Grayscale and take another look. This is easy to do in image-editing programs like Photoshop and lots of others. Usually just a couple of clicks. I typically use the Image > Mode > Grayscale conversion in Photoshop. It does the same thing as creating an adjustment layer for Hue/Saturation and bringing the saturation down to "0."

And here's what you get below from the exact same images when converted to grayscale: 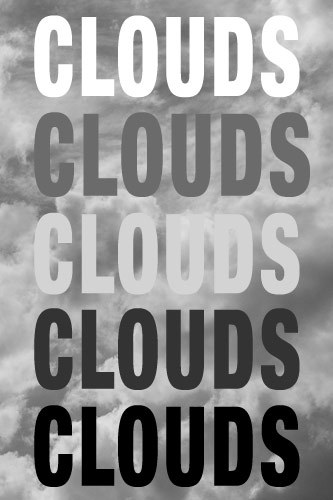 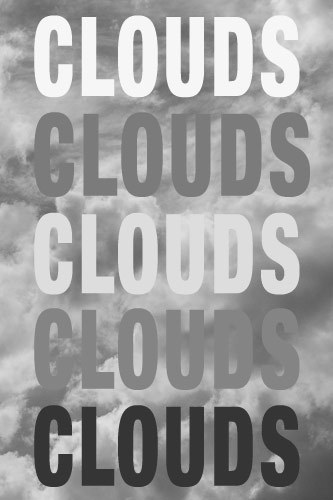 Aha! Looking above, isn't it easier to see now which titles have good contrast with the background and which don't? That is the beauty of the Grayscale Test. It confirms what you may be feeling already, even if you can't quite pin the problem down. The Grayscale Test lays it out for you in black and white (pun intended! :).

What you're seeing in the two cloud images above is very simple. The sky background here is a "midtone," meaning it's somewhere in the middle of the 0-100 L pole above. There are variations with the clouds, but the whole background is somewhere in the 40 range on average. So—and this is the imporant part—the title words that will contrast the most with this midtone background are the ones as far away from 40 on the pole, i.e. the very lightest and the very darkest ones. THOSE are your best options for THIS background if you're looking for the most contrast using only color selection as your tool.

And in the Real World?

Now, let's look at some real covers (well, I made them up, but they're close enough). Below is a photo of mine with both main title and author's name in pure white (#FFFFFF in Hex designation). Plus I threw in a drop shadow for the heck of it. Easy to see and read, right? Good contrast. In both color and grayscale. And because I believe that covers should also be evaluated in small thumbnail sizes, I've added two of those: one at 133 pixels tall, and other at 90 pixels at right. So far, so good, agreed? 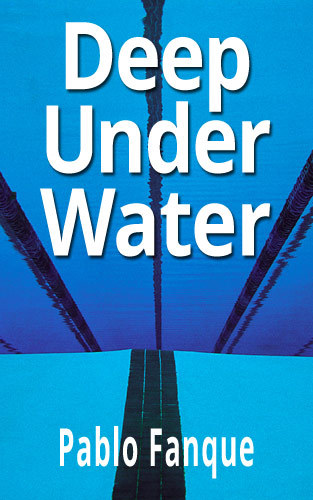 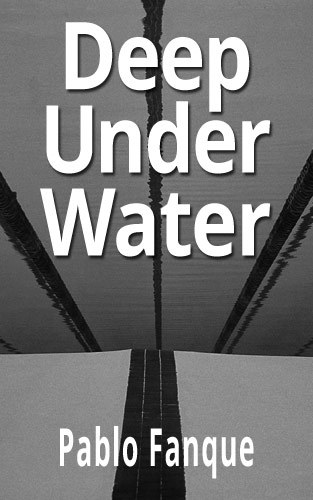 But sometimes you don't want stark white text on the cover. Maybe something more colorful to complement the background or provide a feeling or emotion. So let's try a watery light blue (#66ccFF) for the text below: 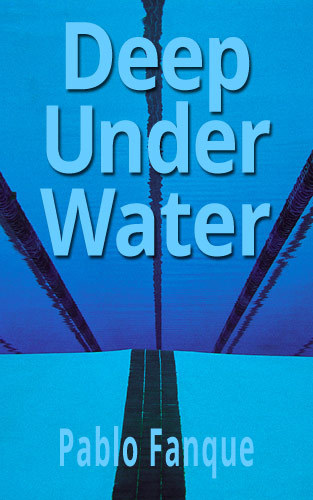 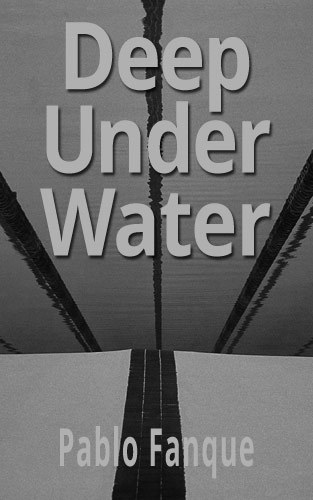 Much subtler, definitely not as much contrast, but still readable in all sizes. Not great (in contrast terms) but workable.

Now how about something VERY different. Let's try a color in the title that people seem to love: Blood Red! In this case, it's a classic version (#CC0000) as shown below: 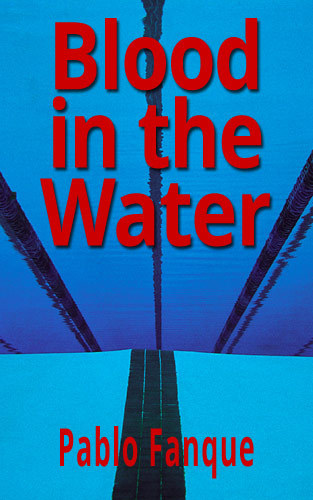 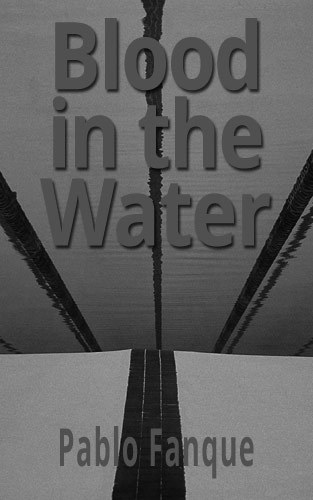 Hmmm… There's something not right about those colors, is there? And the grayscales show it. The title and author name are starting to get lost (squint your eyes or reduce your View size to see this more clearly). Even though Red and Blue are very different colors, here they sit too close on the L 0-100 scale. (there is another issue of the Red and Blue "vibrating," but that's another discussion)

So there you have it. A designer's trick—the Grayscale Test—that is guaranteed to help you in fine-tuning your cover contrasts. Maybe you've got good eyes and can judge your covers by being in color mode. But if you take the extra step to go grayscale, you'll never go back!

Thank goodness! This is a topic about the colour gray, and not Christian Grey.

A very useful topic as well. (To be fair though, the 50 Shades books do have good covers.)

Mod
Ha. I never even thought about THAT Grey!

And yeah, those covers (Fifty Shades) are interesting with their strong graphic element but still good contrast on the texts.

Wow, very informative and clear. Thanks so much for taking the time to share it with us.

Mod
You're welcome, B.C. And thanks.

I wrote about these sorts of topics in books more than a decade ago, so now they're getting another life!

I'm a bit late reading this but -Thank you Harald for this test. I think it's a great tool.

I just came across this, thank you, this will be very helpful for me as well!

I just stumbled across this post, and it explained so much! I create my own book covers with Corel Draw, but I'm a rank amateur when it comes to colour. I know what attracts me, but until now, I didn't know why. I'll check through the rest of your posts to continue my education. Cheers!

Mod
A.C. wrote: "I just stumbled across this post, and it explained so much! I create my own book covers with Corel Draw, but I'm a rank amateur when it comes to colour. I know what attracts me, but until now, I di..."

Mod
B.L. wrote: "Great advice. I always check my assemblies in thumbnail, gray-scale, and both."

Thanks, B.L. And interesting that you call them "assemblies." In my early art director days (long before Photoshop), that's what some color separation houses used to call them.