47 views
An Apology To A Stranger

I hate underutilized intelligence! Some people should not be allowed behind the wheel!

And Rusty I've counted 5 apologies... That's 5 too many. The guy's an idiot, he should learn to live with it.

Welcome to the club Tambo.

Oh, but it's sunny and warm over here, and it still doesn't help... Bummer. ...You drive a scooter, huh?

Okay, besides the moron almost hitting me, what was really annoying was my reaction. I stopped where I was and glared (everything’s alright, so far), but then, instead of giving the driver the bird, I gave the thumbs up. It’s like in the movie Moving when Richard Pryor flips off his boss with his ring finger. This requires a little back story; my wife doesn’t like me to flip people off. It embarrasses her, and she thinks someone is going to shoot me one day, for doing it. So I give people the thumbs up instead of the middle finger (when my wife is around). That way, I still get to give a hand gesture, the wife is semi-happy, and I like to think people still know what I mean. But now it has become habit, and I’m doing it WHEN I'M ALONE.

I hate when people honk when I'm in the car (unless we're about to be hit). I hate when Steve Mort reaches over and honks at someone when I'm driving, for example. It embarrasses me so much.

The idea of replacing the middle finger with the thumbs up reminded me immediatley of this great Mr. Show sketch:

Rusty, you're sending people mixed signals: stern look + thumbs up??!!! If the guy's a total moron how can he grasp that? He might as well shit his pant from all the stress and confusion. You're putting way too much pressure on the dipshits!!!! Making them decipher what you meant... middle fingerm works best.

Yes, I have a scooter. A Yamaha Vino. I love it. But I'm a weather wuss, so I don't ride it unless it's sunny out.

People should bring back biting their thumb at one another. Then you could go for the thumbs up fake out which smoothly transitions from a "good job!" to a "fuck you!"

Anything but thumbs up, irony is just way too evolved...

Occasionally, in bad weather, I see hard core dudes on bikes - they just wear leather... Don't YOU like leather Tambo?

Or just wear this all the time and point at it angrily when necessary:

Tambolina, didn't you have an avatar the other day where you were doing the thumb-biting bit?

All hand gestures feel awkward. If I really need to get something across I'd rather just yell "fuck you! you stupid fuck!" but I usually don't. My husband is prone to road rage and it makes me really nervous.

I think the thumb biting thing died out because well... Biting your thumb after you used the bathroom (10) times without washing your hands usually means your going to get sick... nobody wants to get sick just because they encountered a dumb ass.... to say nothing that they themselves are dumb asses for not practicing proper hygiene. 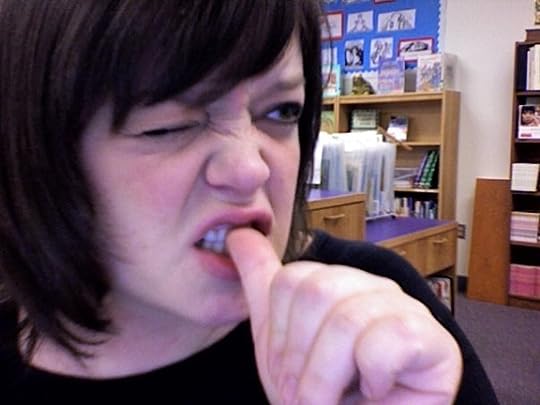 I dunno montambo you look a little ill in that picture... funny I always assumed you were a hand washer... I guess not.

reply | flag
message 23: by [deleted user] (new)
Apr 15, 2009 01:49PM
I most assuredly am. And a foaming Purell abuser. Books are dirty and dusty and grimy. And possibly covered with meth residue.

Servius Sextus Heiner wrote: "I think the thumb biting thing died out because well... Biting your thumb after you used the bathroom (10) times without washing your hands usually means your going to get sick... nobody wants to g..." 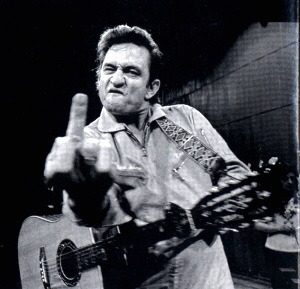 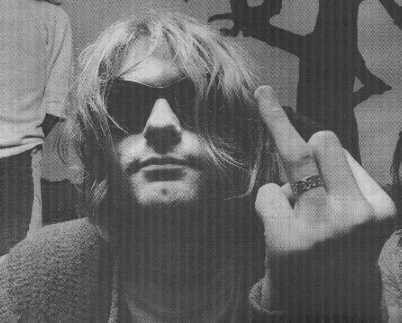 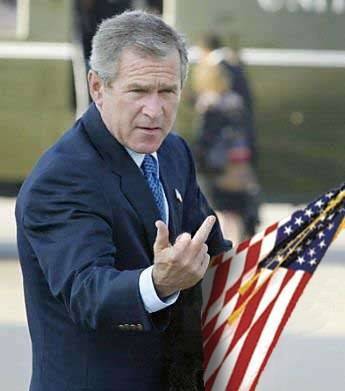 Book dust is the pits.. the wife is always complaining about it being in her eyes. then we have the 'spare' bedroom that is a little library, you cannot go in there with out the books sharing their dust with yer eyes... as a professional book person how do you keep book dust from your eyes?

I don't want to wear goggles every time I go in there to find a new book to read...

It gets absolutely black under my nails every day in the library. We used to have Purell stations around the school. That was heaven.

I recently read that people's immune systems are becoming compromised due to overuse of hand sanitizers. Apparently, in our phobia of bacteria we are killing the ones that actually protect us, and also losing opportunities to fight the bad ones. Well, that's what I read, anyway.

Does anyone else find our Puritan heritage aggravating? Or is it just Canada-contaminated me?Because it does bug me, on SO many levels....

Hand sanitizer? What is that?

You just squeeze it on your hand and make hand washing movements and it sanitizes you and dries instantly.

I've heard that about it, Doni, but my hands get so dirty working with kids that I think I get plenty of bad germs and good germs in my system.

Ugh Doni it totally bugs ME. I hate all the antibacterial advertising hype.

Yes...if you work in a hospital or a school...you get different rules.

Oh boy Tambocia... you thought I was serious?

Gretchen wrote: "Yes...if you work in a hospital or a school...you get different rules."

The rules are: if you work in a hospital you should wash your hands a lot. Hospitals are gross.

I've decided that NOT bathing my kids every night keeps them healthy. Don't try to convince me otherwise germfreaks!

OH! YOU'RE RAISING THE SMELLY KIDS!

There was always one kid in class that smelled in school, and I always wondered (yes even then) how that happened, being that I was forced to shower/bath every day. No I know it was parents like you that didn't hold personal hygiene very high on the things to do list... Finally after all these years I am in the know.

I've decided that NOT bathing my kids every night keeps them healthy. Don't try to convince me otherwise germfreaks!

Gretchen, your ideas are strange and wonderful to me (mostly because it's my week to bathe the kids). How do I convince my wife of the wisdom in your philosophy?

Well, you can tell your wife that they never get sick. And that's pretty much true. They get the occasional cold but so far neither one of them has been anything like some of my friends' kids who are constantly getting pink-eye/ear infections/strep throat/croup/flu, ect. ect. ect. I have two friends with similar bathing schedules and their kids never get sick either. It works. BTW the magic is:
winter: twice a week
summer: twice a week for babies who don't play outside, 3-4 times a week for the older ones.

Was "Hand Sanitizer? What is that?" a joke? Really?

That's not a funny joke.

It's probably funnier in Polish.

I imagine everything is.

But! It was a little funny... Nobody gets me...
::crawls under the blanket and hugs her pillow::

Welcome to my world, Kasia. Be happy, it's beautiful here....

Serv and Rusty, Gretchen is RIGHT and you are WRONG.

Yes Gretchen is right, a little of germs never killed anybody. Now get on your knees and bow.

Too many baths also ruin fun times. Example: tonight was supposed to be bath night but the weather has turned BEAUTIFUL and after dinner my daughter said "Daddy, would you like to all go on a walk as a family?!" in her princess-pitched and most irresistibly enthusiastic voice. If I was a freaky clean freak I would have been like "no time honey. Gotta get a bath in before bedtime." But i didn't. I went for a walk with my family and put my kids to bed dirty. I couldn't be happier about it.

And this way when all the mud gets dry it crumbles off on it's own - no bath necessary and you save on your water bill. All happy.

very true. Plus kids hair has the superior ability to look more and more fantastic the dirtier it gets. Right after the washing it's all limp and lifeless but as the days go on it gets shiny and bouncy! If only MY hair were like that. Mine only looks good for the first 3-4 hours after my shower.