I'm just going to update this thread when I have other freebies since if I start a new one each time it'll probably get too spammy. Anyway...

Comedic fantasy free through March 26! A word of warning, it is pretty violent, although it's kind of cartoonish violence. 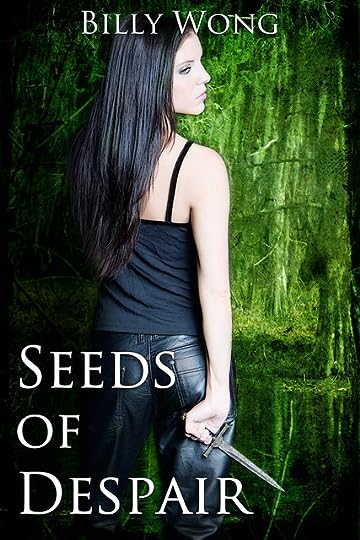 Lighthearted (but violent) fantasy action with a kick-butt heroine.

Fresh off a big win, mixed martial arts champion Gunner challenges his friend and rival, goth metal singer and ultimate street fighter Freya Blackstar, to a rematch of their past battle. But when the outcome is not what he wishes, his resulting misery leaves him vulnerable to a mind and body altering supernatural influence. In order to save him before he goes too far, his friends will have to use all their strength and wits... and maybe a little help from the internet.

Hi Billy. Where is Seeds of Despair available for free?

Oh oops, I see I forgot to post the link, but Amazon http://amzn.com/B00AUBKTM8

Over the top sports fighting action as one tough guy takes on an equally tough girl.

Underground heavyweight fighter Leonard entered the tournament ready for the challenge of his life. Little did he know that when the opponent he looked forward to fighting is forced to drop out, his greatest challenge would end up coming from a girl...

Billy, I just downloaded a copy of "Last Minute Replacement" to my Kindle app. Don't know when I'll get around to reading it (e-books don't fit into my schedule as well as print books), but I'm looking forward to finally sampling your work, whenever I can. Thanks for making it available for free!

Okay, I took time to read this story just now (it's a really quick read) and was glad I did! If anyone's interested, my (five-star) review is here: www.goodreads.com/review/show/610644514 . Congrats on a fine job, Billy, and I'll hope to read more of your work sometime! (Are any of your novels available in paperback format?)

Werner wrote: "Okay, I took time to read this story just now (it's a really quick read) and was glad I did! If anyone's interested, my (five-star) review is here: www.goodreads.com/review/show/610644514 . Congr..."

Thanks for the review! As for the novels, the two out so far about superhuman epic warrior Rose are available in paperback format on Amazon, as is my other novel Saving Fate which features a male MC, but also has a couple of strong female warriors as major characters (one is the love interest/female lead).

Thanks, Billy! I'll definitely have to keep those novels in mind for future reference.

Free through June 4th - over the top fighting with a cartoonishly strong heroine.

Lighthearted (but violent) fantasy action with one butt-kicking heroine.

After winning her spot from a seven foot kickboxer, goth singer and self styled Gothic warrior Freya enters an evil billionaire's underground fighting tournament. She finds herself right at home battling aristocrats, sumos, thugs, ninjas and psycho killers for the title of "greatest in the world." But what will she face if she makes it to the final round against the mysterious Grand Champion?

Billy, my copy is already on my Kindle app as I type! I'll look forward to reading it sometime next week, if I can squeeze it in. Thanks for letting us know about this!

Cool, hope you enjoy it!

I finally got a chance to read "Gothic Gladiator" last night; I didn't expect to finish it in one sitting, but I did. My review won't be up until this evening, but I wanted to let you all know that I gave it five stars! It's a different type of story than "Last Minute Replacement," despite some conceptual similarities; it has speculative fiction elements, and realism (at least in some respects) isn't a concern. But if you take it for what it is, it's very well-done pulp action adventure, with a larger-than-life heroine (even if she is only 5' 7"!) that you can respect and admire.

Free through August 27 - short urban fantasy with one butt-kicking brawler heroine (and the 4th in the Gothic Warrior series).

Best in the Elf-ing World

When the world's greatest mixed martial arts fighter challenges goth singer and ultimate brawler Freya to a match, she eagerly accepts the chance to battle a legend. To her surprise, she soon receives an offer of training from an otherworldly visitor. What she doesn't know is that her elvish benefactor has plans for her beyond just a celebrity cage fight.

The prequel to the Tales of the Gothic Warrior fantasy short story series, Gothic Genesis, is free on Amazon through 9/23.

THIS SERIES IS MEANT TO BE UNREALISTIC FUN. If complete believability is a must, it might not be for you... but if you like the sound of a non-magical female brawler standing toe to toe with huge men and monsters in brutal fistfights on sheer toughness and badassery, maybe it is.

After beating up a player from a rival football team, high school sports star Freya finds herself under investigation for his disappearance. Resolving to find him and clear her name herself, she teams up with psychic outcast Annabeth on a quest that will start a great friendship and change her life forever.