Here we are. Do you have any ideas?

I am up for either Stepbrother/stepsister or Summer camp or Bad boy/good girl. Do you want to be the male or the female?

we could combine them and I'd like to be the girl

How about Summer camp with Bad boy/ good girl?

What age range do we want our characters to be?

How about High school? And I am going to start making my character. 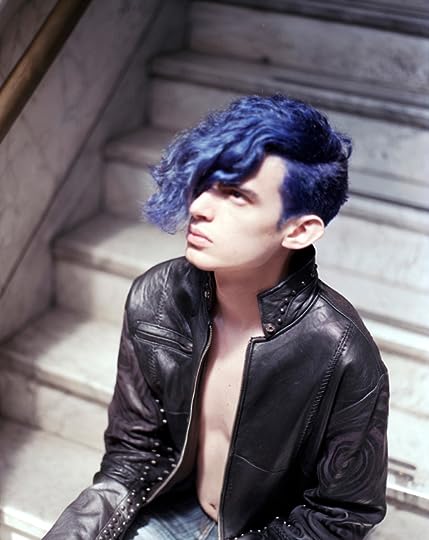 He has baby blue eyes, is very muscular, and has his ears pierced.
Personality: laid back but very angry individual. He keeps to himself except for a few of his friends. He has the bad boy attitude and does not let anyone he does not really know get too close to him.
History: His father left when he was seven and his mother became an alcoholic after that. When he was nine, he was taken from his home and put into a foster home. Since then he has been in and out of school for misbehaving. He smokes cigarettes and has been known to drink now and then. He has been transferred from one foster home to another because hardly anyone seems to be able to handle his attitude and deal with his actions.

Alexander sighed as he climbed out of his faster mother's car. Looking around he shook a bit of his blue hair out of his face. Shifting the bag he had over his shoulder he groaned. He did not want to be at this stupid summer camp and would rather be out with his friends instead. "Behave yourself, Alexander." his foster mother said. Alexander rolled his eyes and sighed. "Whatever..." he said as he looked away. She climbed into her car and drove off after checking him in. Once she was gone, he pulled out a cigarette and lit it. Putting it to his lips he took a drag and looked around again.

((Are you still wanting to do this with me or not?))