Mod
Imanese have a black flag with white fangs, tan claws, a gray ball, golden wings, dark red horns of the 'devil', and a silver bone. All symbolize different types of Species and Creatures.

Powers or Element: A master of dark magic. Can control the shadows and temporarily reanimate the dead. Is also partially immortal 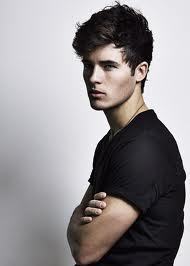 Personality: a brutal and merciless leader when it comes to battle. Hungry for knowledge and also for power. But unlike most of the Imanis he is loyal and just, and takes pride in his honor. He does not tolerate trickery, malice, treason, or hypocrisy within his court, and will do whatever it takes to achieve his goals.

Dislikes: anyone who stands in his way.

History: Born into royalty, he fought and clawed his way to power, dispatching his two unworthy older brothers. Eventually he unseated his own father from the throne and has shown himself to be an adept and powerful leader.

Good or Evil?: Neither, despite having dark inclinations. He values balance above all else.

Appearance( A pic or link. Description has to be at least 4-6 sentences):   http://www.mylifetime.com/total-beaut... (except she has blue eyes)

(Describe their clothes):http://www.imghut.com/content/683/bbb... (simple with lots of colors yet stylish)

Personality (At least 4-6 sentences): She is nice to everyone she is an only child so she tends to protect the lil kids more. She has been betrayed and heartbroken but don't think of her as weak because you might end up in the floor in less than a second. She seems to be born a leader a lot of people follow her lead and she does not mind it. She also speaks her mind and tells the truth no matter how much it hurts.

Likes:sweets,flying, the stars, the full moon,red or black roses only, drawing, painting.

History (At least 4-6 sentences): Teresa Rose Mother was full fairy was raped by Father was demon. Mother died from giving birth to her she has lived in an orphanage ever since. Her step-in-mom gave her classes in magic developed a strong connection with water, fire, and air. She lived there until she found a job and was able to move out.

Weapons (Optional): Small sword that was left by her mother

Good or Evil?: Good unless you get her really mad

Other: She has a crescent moon with a star in the middle its a birthmark, but many think its a tattoo

Mod
You're a mod... It's kinda immediately accepted.

Powers or Element:
-Shifting into a dragon
-freezing things, including some beings
-can breath underwater

Personality: She is quiet and elegant. People mistake her for a faerie or nymph, and then puts her kind down. She is sometimes shy or hostile. She is happiest when alone.

History: She was found walking around without a memory of her parents. The royal couple adopted her. She lived in the castle, hardly ever being seen. She recently started coming out and talking again.