Mod
Airease have a white flag with a light blue wing with line that look like wind on the middle of the wing in white, bordered in silver.

Appearance:Cloudy white hair just like the clouds and pale skin. She is very tall for a 15 year old she is about 6 feet tall and looks very young even though her hair is white. And has pretty golden eyes that shimmer.Plus she has really really long hair.

Style: She wears white dresses with a golden trim and
slip on shoes or just heels but they hurt her feet


Personality:She is very smart and loves to read she even has here own library. Always curious about everything but most of the time she keeps to her self.She is kind as they can be.She is pretty fun to be with

History:She is a Princess so i guess you can guess her history but she loves sneaking out but she always gets caught

Family:Mother,father,and maybe a sister and brother

Boyfriend/Girlfriend:would love to have a boyfriend

Weapons:always carries a hidden scythe all though no ones knows

Powers or Element: Can manipulate emotions and fly

Appearance( A pic or link. Description has to be at least 4-6 sentences): http://www3.pictures.zimbio.com/img/5...

Style (Describe their clothes): The colors of the flag in t-shirts and pants. Though he wears metal shoes.

Personality (At least 4-6 sentences): Derek has been strong and cold for a long time. Nothing has gotten to his shell of a heart. Sure, there's some smiles at times. But only when he has done something. He isn't competitive, nor nice. But if he ever opens up he is nice and warm and kinda fun as well.

Dislikes: Being hurt or others hurt, unless it's his 'enemies'

History (At least 4-6 sentences): His family died and the royal family took him in. No wonder he was been emotionally dead for over a decade. He trained hard and is still dead inside.

Owner (Optional): None, unless you count the royal family

Other: He barely talks

Mod
Want them to meet up?

Mod
Lol meet ya at the castle

Gotcha even thought i already did sorry

Appearance: Beatrix is one of those timeless, classic beauties that have never grown ancient or archaic with the ages, forever seeming to be irresistible. Out of her shapely, angular, regal head cascades a torrent of pure ivory-white hair, infused with tinges of silver vermeil and highlights of cerulean blue, deluging her shoulders and back in a cataract of misty, ethereal clouds.

Crush: (I hope this is okay) Smitten with Derek Nickson.

Boyfriend/Girlfriend: None as of yet.

Weapons: Her own air-oriented magic and a dagger she always conceals in the folds of her billowing robes.

Powers or Element: She can control air, light, and fire, Heal people, and can
turn into a dragon.

Rank: She says she had none

Style: Usually just leather and cloth.She likes the colors of white and teal.


Personality: She can be strict and determined, but nice and sarcastic if you are her friend.She likes it when she is the one in control and the most powerful.She will risk her life for friends, but end the lives of her enemies.She cant stand being weak, and will fight to the death too prove her point.

Dislikes: Shadow,Ix, being weak, and talking about parents

History:She was born too a human mother and father.She ran away from home after realizing their lives were in danger from the evil Ix.Her kin came from a different realm, and left because humans were too greedy and ruthless.Her anscestor took the auma of a dying dragon after comforting him in his last days.

Pets: An elemental cobra that can change appearances too fit those of different elements, named Queen.

Rank: Maid of the Princess

Appearance( A pic or link. Description has to be at least 4-6 sentences): http://i1317.photobucket.com/albums/t...

Sora doesn't have the headpiece...

Style (Describe their clothes): Sora usually wears a simple light purple dress that falls around her knees (maid dress). But, for special occasions, she has a long, fitted pale blue dress that drags the floor. The symbol of Airease is embroidered on her maid dress.

Personality (At least 4-6 sentences): Sora is quiet, and thoughtful, and very shy. She hates attention, and is very loyal to the Princess Avira, and of course, the other royals. She is a kind faery and rarely speaks to anyone unless spoken to. She is an excellent maid and can sense if something is wrong.

Likes: Princess Avira, The Queen, and her kingdom

History (At least 4-6 sentences): Sora was abandoned as a child and never met her family. She lived, starving in the air kingdom. A villager found her when she was about 10, but the villager gave her to the palace due to her beauty. She was given the position of caring for Princess Avira, and has been faithful to the girl-and the kingdom-ever since.

Rank: Knight (can there be female knights?) 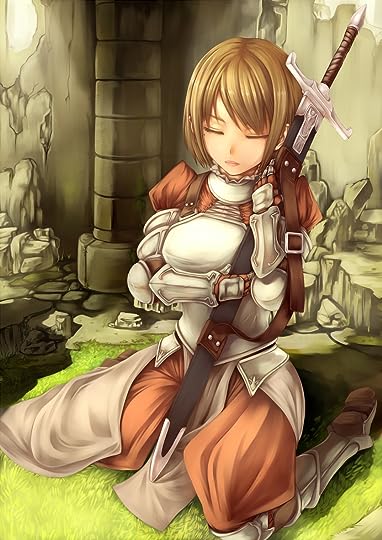 Lenore's hair is longer and a darker shade of brown

Style: Pretty much as the picture above, but Lenore likes to wear pale purples and blues when she can

Personality: Lenore seems quiet and shy, but when you get to know her, she's nice, if a bit sadistic. She lacks the friend-making gene, as such, and doesn't really hang out with anyone. Lenore practices a lot and tries to get things perfect. When on her own she likes to read and... practice?

Dislikes: People being mean (to her and others), seeming weak

History: Her parents were mass-murderers, but were killed in a big bar fight when she Lenore was 5. Her sister was then killed when a mob came down to their house. Lenore hid under her bed on her sister's orders. When she came out, her sister was gone (she's dead, BTW). Lenore was now 12. She left and started learning how to fight. She finally got accepted to be a night, age 18.

Good or Evil?: Her parents were evil, but she's good.

Other: If she can't be a knight, I'll change things around :)