here it is :) now, did you mention you had an idea? just want to make sure.

-Spoiled rock star (who probably has some sort of issues, drug related, girls, ect) falls for some levelheaded person in their crew (photographer, ect)
-Guardian angel has to come to earth to protect their person

Omg they are both so good! if I had to pick....I like the guardian angel one.

Great! I'm the girl, so would you want me to be the guardian angel or you as the boy?

Alright, ill be guardian angel, if that's fine with you. Now all we need is to make the character profiles. do you want to set up the template or shall I? (if you want to just reply with the template, if not then I will :) )

sure! I will do it now! (commences creating profile template)

^tell me if I need to add anything! will make charries in a few mind!

add appearance between species and personality 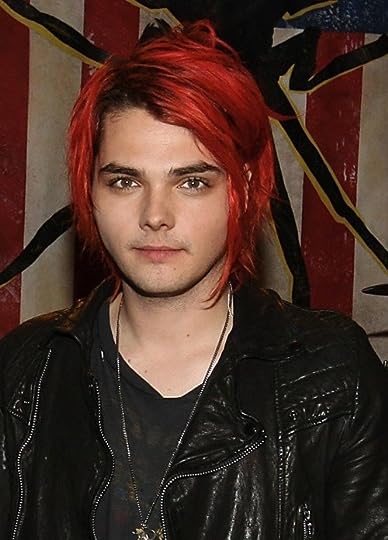 ((I hope the pic works...)) He stands about 5'8" with a pretty skinny build and weighs about 140 lbs. Ryder can typically be found wearing ripped skinny jeans and some sort of shirt from an obscure band. He also frequently sports a army green military style jacket that covers the scars on his arms well. (See below for more info...)
SPECIES: Human
PERSONALITY: Ryder is very impulsive. He doesn't have much of a filter before he speaks and even less before he acts. Sometimes this can be a good thing; he'll be kind to people and stand up for them without a second thought. But most of the time, it's not good. He gets himself in a lot of trouble and takes a lot of unnecessary risks. Despite this, he is usually quite charming, though his temper is one to watch out for. Ryder does occasionally go through dangerous mood swings where he goes from zealously happy to hopelessly depressed. These times are when he lashes out the most, against himself and others.
HISTORY: Ryder lives with his parents, for now, although he doesn't spend much time at their house. Quite often you'll find him choosing to sleep on a friends couch, rather than his own bed because they make it so unbearable sometimes. Between the amount of trouble he gets in, and the inconsistency of his parents attitudes, the whole family butts heads awfully. His dad has been known to be abusive physically, and his mum is almost as bad with her words. There was only so much Ryder could take, and in early high school, before he found friends and things he liked, he tried to kill himself. Twice actually. Clearly both times he was unsuccessful and somebody found him. It didn't help the situation with his parents; it only dug him deeper. He hasn't tried since, but Ryder is on the edge sometimes and still cuts himself when he's upset. His arms are both covered in scars from it and its not something he is proud of.
LIKES:
-Punk, emo, hard rock and indie music.
-His guitar, which he is wicked good at and has been playing for years on end.
-Girls. (What teenage guy who's straight doesn't!?)
-Writing, surprisingly enough. His grades in everything except English are average at best, though that's mostly because he just doesn't care. But in his English classes, he has top marks.
DISLIKES:
-People who lie to those they care about.
-Pop music.
-Fish, the girls bathroom, and wearing glasses.
-His parents.

NAME: Edeva Windsong
AGE: (looks sixteenish, but has been dead for a few years, and is really older)
APPEARANCE: http://images5.fanpop.com/image/photo... Edava was born with naturally bright red hair, but when she was living she dyed it blond, in fear of being judged. (After death it returned to its original state). She has bright, forest green eyes with long lashes. She is about 5’ 4", with a curvy build and a considerably good over-all body. She is 120 pounds.
HISTORY: As a living human, she had a difficult life. She lost her mother as a child, and was left with a grieving father. She was always obsessed with her image, and would dye her hair blond to "fit in" and sometimes lie about her name to "sound more normal." However, she was quite popular in school. She made the cheerleading squad, got all A's, took AP classes, and had a nice friend group-or so she thought. On the last night of her life, her friends tricked her into going to a rowdy party, and got her into alcohol. She got exceptionally out of control-and another party guest did too. The wild partier drew a gun and shot Edeva, not intentionally, but because he was drunk. In heaven, to redeem herself, she was sent to guard Ryder, who was in danger of falling in to a bad fate, like hers.
LIKES:
-Animals: always had a connection with them
-boys: well, duh!
-reading: a lifelong passion
DISLIKES
-mean people
-murderers
-the night: a life long fear of the dark

great! so, do you think were ready to start?

great! so, do you think were ready to start?

sorry, didn't mean to double post that!! but lets get our story clear before we start:

so, Edeva was sent to guard Ryder, for her entrance into heaven. her life was similar to the way his is now, and she is supposed to protect him...

Edeva watched patiently from heaven onto the mortal world. It was amazing how simple and small everything seemed. People scurrying like ants on the street, autumn leaves crunching under their feet as they moved to and fro in the cool December morning. She thought nostalgicly on her old-living-life. her family, friends....then she stopped herself. She had more to think about--a little assignment named Ryder....

reply | flag *
message 26: by [deleted user] (new)
Mar 22, 2013 02:53AM
Ryder woke up exactly five minutes before his bus was due to arrive. His mum ha taken his car keys and five minutes was not enough time to find them. So, the second the time registered in his brain, Ryder leapt out of bed. He rushed around, pulling on clothes at random and sticking a toothbrush in his mouth as he slid on his worn converse. He was out the door four minutes later, bag over his shoulder and red hair still a crazy mess.

Hes more of a mess than I thought," she sighed. "I'm never going to gain my entrance into heaven."

She decided to follow him in her mortal form for the day, something angels really try not to do. She whispered a small chant, and was placed 100 feet behind Ryder on the sidewalk. She took a few cautious steps, trying to act casual. She continued to follow him, to see where he'd go....

reply | flag *
message 28: by [deleted user] (new)
Mar 22, 2013 03:47PM
And Ryder missed the bus. It was pulling away just as it came into view. He cussed and kicked the curb, two seconds later to sit on it and put his head in his hands in frustration. His bag rested next to him and he leaned forward to tie his shoes, then leaning back and debating if he was even gonna go or not.

Edeva stood behind him, and after a few seconds of deliberation decided to say, "Hey,"

Ryder whipped around to face her, a bit of surprise on his face. She chuckled. She didn't think he'd be so cute.

She cleared her throat. "Oh, sorry, I was trying to catch the bus," she lied. She pretended to be a school girl going to take the bus instead of immediately reveal her identity aas an angel. "You missed it, too?" She said it charmingly, aalthough slightly nervous.

"Uh, yeah," she lied again. she shrugged, thinking. she locked her hopeful bright green eyes with his. Slowly, she started, "Well, if you want to could hit a yogurt place in town. Now that we can get to school and all," she said mischievously.

I know the way," Edeva directed. "Follow me" She led Ryder through a maze of streets and corners, cutting through yards and avoiding cars with people that might recognize Ryder. Only a few blocks from the shop, she asks him, "So, what do you think of school? and what do you do in your free time?"

reply | flag *
message 34: by [deleted user] (new)
Mar 24, 2013 07:30AM
"Curious much?" Ryder teased. He smiled though as he followed her, wondering why they were taking such an out of the way route. In answer to her questions her said, "I hate school. It's miserable, but I suppose it's an escape from being home. I just want to turn 18 so I can be done, get out of here with my guitar."