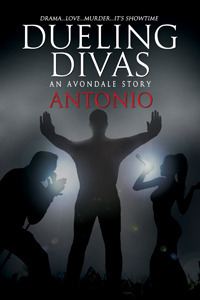 Nash and Stacey will need all the help they can get to escape the cruel fate the murderer has planned for them. Dueling Divas by Antonio, available from Dreamspinner Press.

The Next Club Superstar contest is just the venue Nash Argento needs to further his career as a singer. There’s only one problem: he has to dress in drag.

With the help of his best female friend, Nash negotiates the challenges of becoming a drag queen in order to compete. But his troubles are far from over. His key competitor is Stacey—a biological woman. Incensed, Nash tries to get her disqualified, but Stacey is desperate for the money, and with the help of her quirky divorcée best friend and the best friend’s lawyer, she manages to stay in the contest.

Bobby Carter is a lonely librarian looking for Mr. Right—and he’s looking in Nash’s direction. Nash seems to be everything Bobby needs… and then he brings Nash home for dinner and discovers Nash is his sister’s main competition. Nash and Stacey get to know each other and even become friends—and just in time. Someone is murdering the contestants one by one, and Nash and Stacey will need all the help they can get to escape the cruel fate the murderer has planned for them.

Hope to have this review up on MM Good Book Reviews soon.