One thing that really struck me in this book was the relationships between the married couples. Damon and Elene, Emilio and Miliko, even Satin and Bluetooth are all functionally bonded pairs who work together during times of adversity and never let their relationships get in the way during a crisis.

I could not think of another book, sci-fi or otherwise that featured happily married couples who stayed happily married throughout the novel where that marriage was not the main focus of the book. It seems like if you find a couple truly happy in their marriage, it's basically a death sentence for one or both characters.

Downbelow Station was very refreshing to me on this note, but I am curious if anyone out there can think of another novel with power couples like this one.

Thanks! I haven't read any of those. Will have to check them out.

The later books of the Parasol Protectorate are very much like this IMO. It's one of the things I enjoyed most about them.

Having not read 'Downbelow Station' I may be misinterpreting "power couples", but I have a few suggestions that I think play into this category;

- Celia and Marco from 'The Night Circus' by Erin Morgenstern

- Althea and Brashen from 'The Liveship Traders' trilogy by Robin Hobb

Several books by Spider Robinson feature happily married couples, particularly the Callahan series.
Also several Robert Heinlein books do. In his case sometimes it's not just a couple, it's a larger married group.


I should have thought of them. Leave it to Pratchett to subvert the norm :) Then again, Guards, Guards is centered around Sam and Sybil getting together, and I was trying to think on the lines of books without the starting of the relationship. They still count because they are wonderful, though.

Just about to start Liveship Traders, so I'll look for that one.

Maybe authors shy away from functional and/or happy marriages because of a PERCEIVED lack of conflict? That's my guess.

One need only look at the way the comic industry deals with monogamous relationships. Some of the longest standing couples - Clark and Lois, Barry and Ira, etc, - have all been broken.

The only comic couple left standing is Reed and Sue Richards, but one wonders how long they'll keep that around, when you've got Namor hammering at the door.

Richard and Kahlin from The Sword of Truth series. 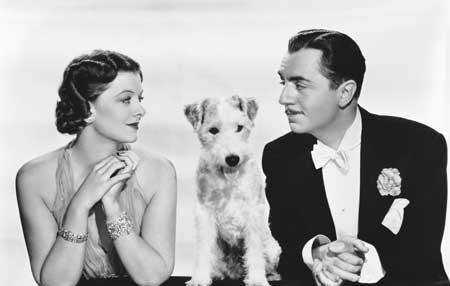 Tamahome beat me to it. But another such couple in detective/crime fiction would be Spenser and Susan Silverman in Robert B. Parker's Spenser novels. Though they're not married, they're as devotedly monogamous as you can get. In television, there was the late 70s/early 80s series Hart to Hart, about a jet-setting millionaire couple who solved crimes in their spare time.

There's also the Boy's Love manga series Fake, about two NYPD detectives in a same-sex relationship, and their adopted daughters.

In fantasy you have Simon R. Green's Hawk and Fisher series, about a husband and wife team who are the only honest town guards in the corrupt city of Haven.

Barbara Hambly's excellent Those Who Hunt the Night has former British spy James Asher and his physician wife Lydia dealing with a vampire conspiracy in Victorian England each from their own areas of expertise.

Hmm, it looks like stable family relationships seem to be a recurring device in fiction that involves mysteries or investigations, since sibling detective teams might even be more popular than pair-bonded ones. I wonder if there's a reason for that?

What a great thing to notice. I think the lack of romance, or pursuit of the romantic relationship gave Down Below Station a more mature tone as we saw these strong pair bonded couples working together from within the strength of their bonding.

Romance is such an easy and interesting point of conflict, and with such a large cast of characters it's interesting that Cherryh chose not to include it. It really focused attention on the dire and precarious position of Pell.

Those Who Hunt the Night (other topics)