Free on Amazon Kindle until about 5 this afternoon.

What would you risk for love?

Marlee's people are dying—the valuable anysogen gas that covers their planet is making the entire population infertile. When the council tells her she must leave her partner and choose another to improve her chances of having a baby, she’s devastated. She swears she’ll never love again—it hurts too much.

Tyris thinks he has everything he wants, despite his world suffering from overpopulation—until his wife leaves him because he is forbidden to have children.

In an attempt to convince his world, and his wife, that he’s worthwhile, Tyris goes hunting for a lost planet said to contain untold riches in the form of anysogen gas.

When he crashes on her world, Marlee and Tyris agree to pretend to live together while they try to repair his ship and escape from the planet. But as they battle the harsh winter on the planet together, keeping their distance becomes even more challenging than the snow, the council and the risks of a real relationship...

Good luck with the giveaway.

I would be interested to know if you thought the promotion was a success (as I am planning to do the same soon).

DLed a copy and looking forward to reading it next week.

Well, I've had plenty of downloads. Whether that will translate into paid sales, it remains to be seen. I plan on doing a couple of posts on my blog about it over the next few weeks, as I find out.

Mod
Thanks Rinelle! Great giveaway:) Don't forget to promote here too, using this folder, as well as your blog...when you have your own folder you can promote all your work, not just when you have freebies:)

Good luck with it:)

My free promotion is finished, and I posted about the results on my blogif anyone wants to know how it went.

I've also posted the first two chapters of Reckless Rescue up for you to read for free. http://rinellegrey.com/reckless-rescu...

Mine starts in in three days, which is all very exciting.

I hope so. :) I think though, the important thing is to keep up the promotion after the free days are done. 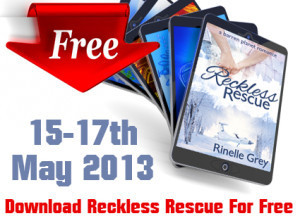 Reckless Rescue is free again from the 15th to the 17th of May (US times), so if you missed out last time, download a copy now.

Ooh, it's available now - I'll leave you a review once I have time to read it :D

Thank you Demelza, that would be wonderful. Hope you enjoy it!

Rinelle wrote: "Thank you Demelza, that would be wonderful. Hope you enjoy it!"