This topic is about City of Blaze
46 views
Fantasy > Help me decide on my covers!

Hello everybody. I wondered if any of you fantasy lovers would mind helping me decide on where next to go with my book covers?

Here are the old ones:

And here's what they might look like if I spent a few hours (weeks!) colouring them in. 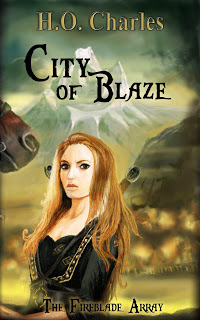 I've got a vote for it on my blog, but I'd be grateful for your thoughts here, too!
http://cityofblaze.blogspot.co.uk/201...

H.O. wrote: "Hello everybody. I wondered if any of you fantasy lovers would mind helping me decide on where next to go with my book covers?

Here are the old ones:


Some alternatives:
I tend to find that color attracts my attention more, and i think most people feel the same way. Besides, you obviously have a talent for art-why not let it work for you?

I prefer your alternatives (the motifs are more effective). But your sketches are unusual and very good, the only thing is I think the title font isn't bold enough on three of your books (it's better on nation of blades). I am not so keen on the colour cover, the girl looks too much like a cartoon, but the background however does look very good.

I have to say though compared to a lot of fantasy covers I've seen yours are very impressive.

Assuming that the graphics on the "some alternatives" list are in some way connected to the contents of that particular book... I like these the best.

First, what I failed to initially do with my own books, establish an identity, a "corporate identity" if you will. Your alternative covers offer that...similar colors, design and lettering; the only difference being the centerpiece figures.

Coloring in the "old" covers doesn't give you any of those positives... ;o)

Thanks guys - that's really helpful so far - keep it coming!

LE - I know what you mean about the girl looking cartoonish. I painstakingly eye-dropped her colours from a real photo, but it still didn't seem to make her believable! I may try tweaking it, but if the alternatives (the off-black ones) are that much better then there's no point.

As an alternative-alternative, I may keep the graphics as covers, and use the drawings as interior 'extras' :)

I like the alternative "City of blaze" one with the sword. It's simple and intriguing. Personally I never liked covers with characters on them because it interfered with what my imagination was making them. Maybe you could move the eye to the other side?

I think I tend to gravitate to the "simpler" ones as well. Without people on them you can use your imagination more.

I do like the alternatives but the drawings colored in make stop and want to read the synonpsis. It has the biggest impact on me. I also like the suggestion above in keeping drawings for the intereior of the book. Adds a little bonus. Best of luck!

I voted, I like the alternative ones. Good job!

Thanks everyone! Alternative and 'colour' are now neck and neck!

I'm not a normal voter here, since I'm a professional graphic artist.

so here's my take: the colored in drawings don't do it for me, even though I think they're an improvement over the original black and white drawings.
The alternative covers are closer. My only observation is that the "glow" pattern is the same as the background dropoff pattern, and I find that visually distracting, especially on the clawmark (or is that icicles?) I would use that swirl pattern in one, but not both places. In other words, don't swirl the back and swirl the glow or vice versa.

In the alt. first book, I think you can get by with either just one feather or make all the feathers smaller, if you have to use all four. Right now, they're fighting the dominance of the sword, to the detriment of both.

I don't know what that is in the last alt. book cover. Maybe the glow is too much?

Also, even though I like the font for the title BETTER in the alt., I think you can get away with a stronger sans serif. The secondary type is lost altogether.

I'm not a professional graphic artist but I did study art and graphic design in college. I like the flame motif background on the alternatives. I would keep that. I don't think the foreground images are strong enough, however, and I think by limiting your color you're doing yourself a disservice. On the alternative City of Blaze the strongest graphical element is the green feather! So either don't color in the feathers and color in the sword, or make that green feather the image.

I agree with the last poster that I don't even know what the last foreground object is. You need those images to be very strong, and since you have color in that flame motif, I would recommend at least a bit more color in your objects. Overall, the alternatives are stronger than the originals and do give you branding.

One last note--the only problem with the alternative version is we can't see your name! Make that more prominent. 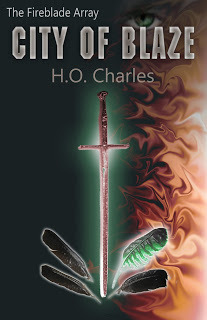 /edited to space out lettering in title

if you're talking to me, yes, that seems better, IMHO, of the sword. See how the glow is not competing with the background swirl. I would put the actual colored feather on the left side, to make it pop out and the black ones over the back swirl.
On the other hand, now that I see your new sans serif font, I think its too heavy and would prefer your original font there.

Hmm ok... maybe these are better then? Many thanks for all your input! 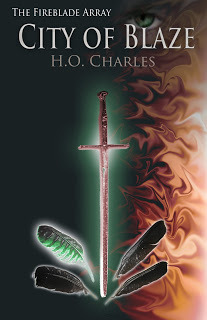 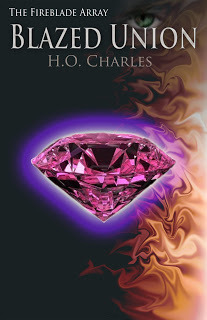 I agree with John on these last examples, although I thing the glow on blazed union is a bit too strong. If the drop off was steeper the jewel would jump off the cover more

good point on the jewel glow, yeah, tone it back a bit

Yes - I tried to fade it more sharply before posting it, but it refused to obey me. Will have another go after I've taken a breather!

Agree with previous posters John and David...the newer covers are more readily recognizable as a series (continuity of basic design) and they pop. I found myself squinting at the original covers. I couldn't tell if they were a graphic novel or just fiction.

Definitely think you are heading in the right direction with your new ones, though! Nice work!

H.O. wrote: "Hmm ok... maybe these are better then? Many thanks for all your input!"

Decent. Everything stands out, nice mix of colors and crisp font. I'd vote for these.

If you're like me, you'll be re-designing your covers for the next couple of months. You can see the transformation of mine:

AFTER:
A Hummen in Spiral Gorge

I discovered the same thing you are - goodreads is the place to find positive feedback for your covers.

A Hummen in Spiral Gorge (other topics)