First Name: Isis
Middle Name: Akasha
Nickname:Spiritus
Last NameAsherah
Gender: Originaly Female, can turn into a male
Birthday: May 6(this may be edited)

Appearance: (view spoiler)[
Isis was a beautiful sight. Dark hair, violet eyes, wings of glory, skimpy clothing, but she rocked it like no one else could, making it look royal and elegant. Isis, as a male, was basicaly a more girlish, more skimpy, more gayish, more femboyish form of Gladde. He retained the dark hair of Isis the female, but had stormy grey eyes. (hide spoiler)] 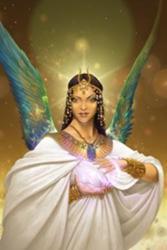 Wears bras that show off most of her cleavage, loincloths with the back ed longer than the front, long cloths on her back, just a long rectangle of silk that she dances with. Dark hair that falls all the way down her back, bright purple eyes and an hourglass figure.

Powers/Special Abilities: Spirit Manipulation(includes crystals, Light, Telekinetic, Psychic/Telepathy, leviation, and invisiblity), Flight, Cirlce Casting(Can expell her Soul in the form of 'Goddess Isis', an ethereal elemental being, her physical body will be in a coma/death-like sleep when doing so)
Weakness: Iron numbs her magic. Spirit Energy can not Travel Through Water. As an Ethereal, her body can be kidnapped and her Soul would have to find it. Nether and Aether Elemental Magics can over power hers.
Fatal Flaw: Sexual desires often lead her astray into traps. >.<
History:

Was one of Seven Siblings who were gifted the power over the Seven Elements(Air, Fire, Water, Earth, Spirit/Akasha, Nether/Dark/Death, Aether/Light/Life). She was the eldest to be born but has remained her youthful glow. She holds the power over Spirit, the Source of Magic, the Power of the Soul and Divine Energy. This makes her the 3rd most powerful of her siblings. She can bend people to her will, but doing so awakens the Darkness Within.She must be careful to not use her Gift for Evil or she'll be lost to the Darkness Within.

The Birth of the Siblings is surrounded by legend. Some say their father was a God and their mother a queen, the father blessed the children with these powers, as long as they remained pure-of-heart. Another tale suggest their father was a king, a poor merchant or a strong warrior who a Goddess fell ilove with(A-strugged with money, but was always happy B-was a kind and loving king C-was a brave fighter who won her heart), or felt sorry for(because A-was poor B-could not concieve a heir to the thron C-lover died in childbirth while away fighting). Either way she let him sleep with her and she beared his children. Warning him if the children were to become evil, their powers would possess them.

The Darkness Within is a corrupt Soul that exists within each Siblings. This Soul Counters the other, Pure-Of-Heart Soul. Due to having two Souls, they can change genders, each gender can be Good or Evil, it all depends on the usage of their elemental magic. As for Isis, her Inner Evil is that of an 'Energy Vampire.' She can devoure the souls and sanity from other creatures throught bite, kiss, s/x or, like a succunus/mara, visit them in the night, induce nightmares while draining their energy, making them weak, h/rny and slowly insane.

Giving into an Inner Evil will temperarily Warp the sibling, giving them demonic-like appearances. The more they PURPOSLY give in, the harder it is for the Pure can fight off the Dark.

Ages from Oldest to Youngest

Jaypes wears white/grey suit&ties or simple robes, white/blonde hair and eyes like melted chocolate. Female wears only a lion cloth and has wings of a dove, blonge, long and curly, with multi-colored eyes.

Pranxtor has brown/red hair and brown/red eyes. Feckles Muscular and tan, arabian-clothing or roman armor. Female is a Red head with freckles across nose, belly dancer/whore(arabian prostitute-look) with veil over face.

Larfor has dusty brown hair and green eyes, fat, blackmith clothing or attire made of leaves. As a female, a nude nymph/elf with only a green cloth to cover up, runs fast, has freckles, brown/orang hair with stag horns.

She's based off of a Wiccan lesser goddess/spirit of the Element Spirit, which is the source of magic

She has 6 other siblings, who are male/female aswell. Ill add in a history to behind it

Mod
You forgot the height and weight.


Oh, right, I will get to that

yw? what does that mean?

N if anyone wants to make her siblings, i listed their names, elements, looks.

The aether and Nether, however, need names. Aether's angelic while the Nether's demonic with a thing for corpses and death, s/he's a necromancer. Aether's an oracle and healer.

Anyone on to rp with?

Mod
Amu's at the chocolate shop

Kimiko (Kyou and Ryou) wrote: "Amu's at the chocolate shop"