Mod
No pics yet. Find your own pic for your own section. ;D


Nessie walked over to her section of the room and put her bags against the wall. She flopped onto the bed and spread out.

Nessie got up and decided to walk to the dock. She grabbed her camera and ran off

reply | flag *
message 4: by [deleted user] (last edited Mar 17, 2013 06:38AM) (new)
Mar 17, 2013 05:40AM
Rowan strolled quite frelly into the dorm, carrying his rucksack on his shoulders and a guitar case in each hand, both he placed ever so delicately on the bed, but he then just allowed his rucksack to fall from his shoulders with a somewhat substainsal thud.
He glanced around, seeing as no one was in he quickly set about open the case which had 'Elektra' engraved on it, pulling out his bass. 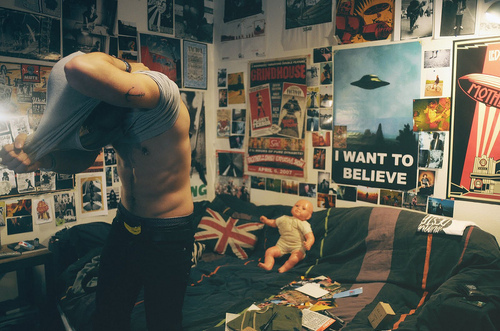 Nicki was walking through the hallway on her way to her dorm, when she heard someone playing a tune on the bass. She placed her ear on the door, listening. When they stopped, Nicole knocked lightly on the door. "Can I come in?"

Nicole heard there was a meeting at her RAs dorm. She decided to head there now.

Jack opened the door and walked inside, looking around and strumming his ukulele wildly. "Nice place, right, Finny?" He shouted this over the sound of his ukulele being played by a maniac, and he went down the hall, opening all of the doors. "Come, Finny, looks like the last one is ours. Set your stuff down, we'll work on it tomorrow." He dropped his bags and his ukulele on the right, then walked down the hall again. "We should go explore this place, Finny! C'mon, hurry yer buns!"

Finn trudged right behind his brother, looking at the dorm with a different eye. Sure, it was nice, but it wasn't home. It would take a long time for it to be home. "If there's anyone else in here, please excuse the ukulele!" He followed his brother into their room, he sighed, it was so...plain. He set his bags down on his bed on the left, then crossed his arms and looked around again. "Yes, we'll have to, won't we? Paint, stick all of our posters up, get out the bedspread... it's going to be a lot of work..." for me, he added in his head, Jack hated work. "No, Jack, we can't go exploring now, there's a meeting in the RA room very soon."

Jack made a pouty face. "If they wanted to have a meeting, why couldn't they have had it while we were all there?"

Finn rolled his eyes. "They're in charge of us, Jack, they can do what they want. C'mon, let's go now and be early." He pushed his brother out of the dorm and into the RA room.