Mod
Vampire! woot. Do you want to continue where we left off, or start over?

And the characters weren't deleted, just the roleplay, so if you don't want to re-write your character you don't have to, just copy it here.

Mod
Name: A'isha Kresnik
Age: 23
Gender: female
Race: human
Appearance: Long black hair down to her waist, she keeps it straight and pulled back a lot. It often has spikes and such braided or pinned into it so her enemies can't grab it. Her eyes are an icy blue accentuated by her pale ivory skin. She is tall, not very curvy, and a light athletic build. 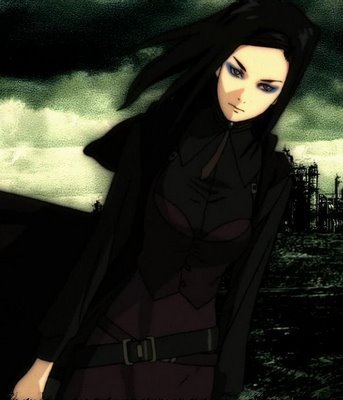 Personality: In order to protect herself, she has created a hard outer shell to keep everyone out. She stays distant and unemotional, so she can do the job. The job that no one else can do. She has to be strong and independent, with no trust whatsoever in anyone.

History: Her parents were from a long line of vampire hunters, surprise surprise. Taught from an early age that vampires were evil, she's trained her whole life to become their hunter. At first it was almost like a game to her. You go out and kill vampires, no big deal. But then her brother was brutally murdered, followed soon after by her mother and father. Turns out the vampires were biting back on the old families that had fought so hard to exterminate them. She's been on the run ever since, fighting to stay alive as well as take down as many vampires with her as she can.

Abilities: It's an old family legend that the first of the vampire hunters were bestowed with inhuman abilities to help them kill the demons. Most don't take it seriously, but A'isha believes it has made her stronger and more flexible than regular humans, as well as quicker reflexes.

Weapons: Her weapon of choice is a small handgun that has a lot of bite--fires wooden bullets she makes herself. She also carries holy water, is pretty competent with a bow an arrow which she takes on longer hunts, and various other objects.

Other: Tries to stay away from humans, as she doesn't want to bring her fate down on them. She's a master at disguise, is fluent in several languages, and knows how to hide.

(Sorry, I lost this ah poop me)
We can go ahead and do the same story line if you'd like

Mod
Where we left off or start over?

The Fantastic Group of Awesomeness :D