Once Upon a Time (TV Show) discussion

Mod
The title is a bit delayed.... but *shrug* no matter. I mean, we were introduced to Storybrooke a year ago.

JAMIE DORNAN, aka the HUNTSMAN, is BACK. Yes! *happy dance*

Mod
I think I really liked that episode. There were some excellently shot scenes [Regina's early days in Storybrook].
It hadn't been clear before that they basically live the same day over and over again [Snow gives the same lesson in S1E1], so this gave more insight as to how the curse really works. And I love how Gold completely played her :)

Also, it's interesting to see Evil Regina in Storybrook as Mayer, before even Henry, though I don't really get why she had to arrest Owen's father if she let him run away. It was cool seeing modern day Owen's backstory :) I think I'm glad the stranger is there for a reason. I'm starting to think he came to Storybrook on purpose now, to look for his dad [I wonder who/where he is and what happened to him- did he age while everyone else didn't? Or did he also not age because time doesn't move?]

Best line of the episode goes to Emma: "And you fell for that? He's your son!"
Though I am slightly sick and tired of what they're doing to Regina- bad, good, evil, less evil, turning good again, etc. She's acting like a ping pong right now.

What did you guys think about the end with Snow? Personally I'm surprised she's going through such a breakdown. It doesn't make sense to me that Cora is the first person she killed. I mean, didn't she and David go around the kingdom, fighting? How could they have not killed anyone?

I can't decide if I liked Henry this episode or not.

Mod
Dittos, I really liked seeing the Storybrooke curse days. Personally, my favorite line was "Sheriff Graham, I like that uniform on you" from Regina. I loved seeing Regina so happy. It's something we have really never seen. It was wonderful. Honestly, Regina does deserve this happiness. Personally, I despise how insensitive Emma and company are to the fact that Regina does have feelings and a heart. And every time they take Henry away after she saves him, it hurts. Can't they accept that Regina would never hurt Henry?

People are saying Tamara, Bae's fiance is Tiger Lily. Do you think it's possible? He did go to Neverland before going to our world, so he could have picked someone else up along the way.

I get the sense that Owen went back to where he lost his father every so often, just to check if something had changed. I think he knew that there was something not right. And the time he almost ran over Hook, just happened to be the time he struck lucky and found the uncursed Storybrooke.

Snow... Is getting on my nerves. I love the fairy tale snow, but here? She's so annoying. She never mans up and fights back. She constantly makes increasingly stupid decisions, and. UGH! But I agree, the decision to decieve Regina to kill her own mother, that was truly evil. Just allow Rumple to die, he was begging for it (although, fact is, if he had died, half the viewers would have left).

Henry... Is irrational and has no character profile. He's so inconsistent! Would the Henry we met in the 1st episode go to blow up magic? No.

I think Owen's father, Kurt, I think is his name, must have begun to fall under that spell.... Actually, I keep remembering the guy in the hospital gown under the hospital where Belle was kept. Do you remember? The one that Regina walked past? I feel like.... Meh. But that's one of those people we saw, but never placed. He had longish hair, an aging face. Anyways, I think he must have gotten sucked into the same repeating time frame. Without Owen to keep him in reality, his reality probably becamed consumed by the curse, and he lived the same day over and over again.

Tamara being Tiger Lily doesn't make any sense really. He went to Neverland BEFORE he met Emma, remember? Unless he came back for Tiger Lily, assuming she's even in our world and not in Neverland...

That could be. I could see Owen just randomly popping in there when he was in the area or just feeling down or something. That would make sense... It's funny that this episode was sort of his back story.


And as someone pointed out- Snow killed an ogre at the beginning of the episode. Both murders were in self defense. Unless it was the way she killed Cora- Cora's death was much dirtier than a nice clean kill with a bow and arrow...
Pha. I probably would have left pretty soon after Rumple died...

But Henry did have to change, and he changed his view on magic according to if he experienced it or not- before he did, it was great and wonderful, after he did, it was dark and evil. He would be a really bad character if he didn't change like that.

Lived the same day over and over, maybe, cause that's what happens all around him. But if he ages, he's not under the spell...

I found him! This is who I think Kurt became: 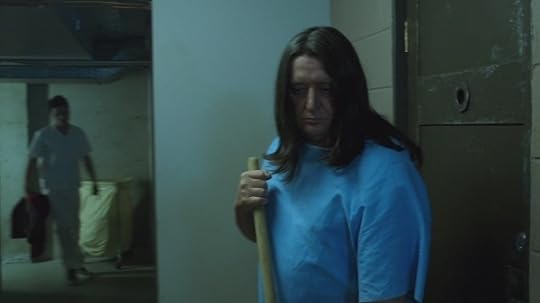 Mod
But she still must have killed SOMEONE.


Hmmm... interesting. Could be.

Mod
It's just that the camera focused on him. It's strange that I remembered him after so long though. It's been almost a year. I saw a preview for the next episode, which is about pinnochio, and Regina confronts Owen about why he's here. And, well, she says that his father isn't there. But, in reality, is the father just... dead? Maybe he didn't live like everyone else. I mean, Henry probably lived the same day over and over for ten years.... *shudder* I'm curious as to how the curse worked around Henry. This made me laugh: http://siacatmesecat.tumblr.com/post/...

You'd think she'd learn not to kidnap children from Hansel and Gretel, right? but Noooo. she tries with Owen in this episode.

Mod
That is strange. I recognize the picture, but I would have never thought of it on my own...
Or maybe Regina is lying? for some unknown reason?
Yes, I am curious about that as well. Or maybe that's exactly why he knew there was a curse- he kept on getting older, everyone else didn't, he remembered living the same day over and over again. Unless maybe Regina controlled it somehow....

Lol. That tumblr thing is really funny. And totally works :)

When was the last time Regina learned from any of her mistakes?

Mod
I thought of it on my own! Me! Hahaha. I'm just astounded I managed to make that connection without checking out people's comments on Facebook. Regina is probably lying.... But I can't imagine why. She couldn't have taken out Kurt's heart- there is no magic in Storybrooke, at least at the time. Perhaps, if it is the crazy guy in the basement of the hospital, Regina doesn't want to Owen, or Greg to know that he went insane. Perhaps, in her own perverse way, Regina's trying to protect Greg.

I know, right? Regina.... She's so epic. I have never appreciated her character more. I know I already said this, but I loved seeing her happy. It was so wonderful.

Mod
I am very proud of you Klyme ;)

Hmm, i forgot there was no magic. I really like your theories about this. They make sense :)

The funny thing is, I used to hate Regina because she was so shallow, but then we all discovered she's the least shallow person on the show.

Mod
Aww. Thanks, Sia. You make me feel special.

But it's pissing me off because her story is always changing who she is. And everytime "who she is" changes, it completely changes what we think of her, but never what they think of her.

Mod
The whole thing about our perspective of Regina being changed, and us expecting the characters to also change their perspective, but they don't.

Once Upon a Time (TV Show)