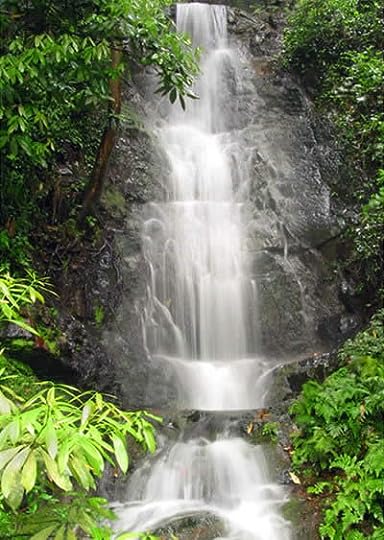 The falls. Now many campers will come close to them, too frightened of the mythical Death Angels.

Jana led Darla, Luna, and Jake to the falls. Darla tensed up and her mouth twisted uncomfortably.

Luna shivered and hugged herself, "it's kinda creepy here.." But it looked so peaceful.

"Look, there's the path to camp!" Jake said excitedly. He felt uneasy but was able to ignore the uneasiness easily.

Luna nodded and dashed for it, "let's go!"

"Be careful." Jake warned as he followed after her.

Luna shook her head and sprinted, she knew she wasn't a fast runner, but she tried pushing herself.

"Luna!" Jake called, worried she would trip and fall or something.

Luna lost her footing easily and fell. She curled into a ball and started crying. She wanted Felicia and her baby girls.

"I told to to be careful." He said with a sigh and went to help her up.

She sniffled, "I don't wanna get up," she curled up more.

"Come on Luna you have to." He said, trying to coax her.

She shook her head, getting grass tangled in her long hair .

"How will you see Nyx or Alex or Kiki again if you don't?" He asked.

"Of course you will." He said, trying to be patient.

She shook her head, "my little wolf baby isn't coming back. Felicia is made at me and will never bring her back !"

Jake ground his jaw. "Why would she be mad at you?"

"Because of what happened! I slept over in your cabin and she got the wrong idea!" She sobbed.

"She knows nothing would happen between us." He growled.

Luna sniffled and hugged herself, "she's still mad though..."

"So she's going to kidnap your daughter?" He asked flatly.

"So what do you think she'll do?" He asked with an eye roll.

"Why do you think she'll do anything?" He asked.

She sniffled, "I trust her. I'm just scared."

"So how does crying on the ground solve anything?" Jake asked. "Let's get back to camp."

She sniffled and stained there a couple more minutes before getting up.

"There you go." He said as he helped her to her feet.

"Let's get back to camp." He said and held her elbow gently as they walked.

Luna stumbled at first but quickly got her footing and walked with him.

He steadied her when she tripped while Darla and Jana followed along behind them.

Luna glanced around oddly, getting frightened by even the smallest sound.

"Almost there...." Darla said, on edge and almost snappish.

Luna nodded and gasped, "I can see camp!"

Darla sighed in relief. "Oh good. That place sets me on edge." She shivered.

"Ugh, this place gives me the chills." Jana said and shivered.
"There is something off about this place. Do you get the feeling we are being watched?" Caleb asked.
Jana was seriously spooked, and Caleb was not helping. She told him to shut it and keep walking.

"What's the time?" Jana asked. Caleb took his phone out and checked, the light illuminated their path ahead.

Luna fallowed and waited until 12:59 to walk out, "I told you I was coming," she forced a force field around the fetus, protecting her baby.

Jana turned around and gasped.
"Luna!" She ran over and hugged her. Jana was kind of glad she came.

Nothing happened. They all stared in silence confused. Maybe it was just a prank...? Jana thought, but suddenly a voice was heard over the roaring water of the Falls.

"Well well well. Looks like you're finally here." it was a male's voice. Although it sounded of determination and a hint of malice, Caleb was able to sense the underlying fear. His emotion-sensing abilites were finally coming handy.

A dark figure appeared in front of them.

Luna flinched, she burrows her fear and plaited with her bright red dress, "what do you want?" She tried to sound stern, but it came out smooth.

The figure laughed menacingly. It was still too dark to see, or identigy who that was.

"Screw this, you and your stupid 'trying-to-be-mysterious-and-scary crap. Cut the crap and tell us what you want." Jana said taking the phone out of Caleb's hand and shining teh light in front of them.

No. There was no denying the ink black hair, and blue eyes, and features that could easily let him pass as Oliver... but this guy was slightly shorter and leaner. Oliver was more built. there was something off about him.
Jana felt as though he looked familiar.

"No, not Oliver... " Jana gasped in realization, "Its you! That fake-Oliver dude!"

Luna let her wings out, her eyes bright red. The green in her wings had a black and red tint right now. She lifted off and flew into the guy, knocking him over.

The guy got up looking scared about to run away.

"Stop. I-I just need help. You promised to help me before. You said you wouldnt hurt me. I know I ran away, but I'm here now. Im in trouble. They're coming for me!" He said.

Jana looked at Caleb. "Can we trust him."

Caleb sized him up and nodded. "He sounds sincere enough. He's telling the truth."

Luna wasn't sure what was wrong with her, violence wasn't in her nature, "if you run away again, i swear I'll-"
"Luna.." Jana's worried tone cut her off.
Luna glared at the guy then pulled her wings back into her back.

Jana was all for kicking ass and generally pummeling people without reason... but Luna was here, and picking fights is not exactly safe. Plus she was pregant, Jana didnt want to do anything that would put any of them in danger.

"Well, you're here now. Speak. What will you give us if we help you?" Jana asked.
"You wouldn't be dumb anough to run away a second time woudl you?"