Mod
Author R.T. Kaelin who has written Progeny & Prophecy had a great idea recently...well I'm sure he's had more than one, but he also decided to start up a project to help victims of Hurricane Sandy.

He contacted some of his author buddies (like me) and more flocked to his banner and soon this became real: 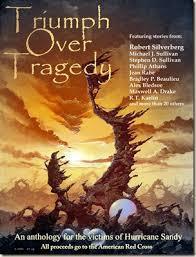 It's an anthology of 41 short stories that each author has donated work to, and every penny that it makes will go to The Red Cross to benefit victims of Hurricane Sandy. Also adding their considerable talents to the project are: Sarah Chorn, Bryan Thomas Schmidt, and Rob H. Bedford who joined R.T. in editing the stories, and Kevin Ward who contributed the cover artwork. It sells for just $6.99 and so for every copy sold The Red Cross will receive $4.89 and you'll get some great reads to boot! You can purchase the ebook at: Amazon | Barnes & Noble.

Here are the goodreads authors who have contributed:

A list of the stories includes
* Old Leatherwings by Elizabeth Bear
* Quick by Mark Lawrence
* The Pope of the Chimps by Robert Silverberg
* When You’re Dead… by Michael A. Stackpole
* Traditions by Michael J. Sullivan
* Death Between the Stars by Marion Zimmer Bradley
* Hell Matter by by Jean Rabe
* The Adjoa Gambit by by Rick Novy
* Hero by R.T. Kaelin
* Big Apple, Small Serpent by Ari Marmell
* I Am Made of Every Color by Jaym Gates
* Spoils of War by Adrian Tchaikovsky
* Orphan Train by Vicki Johnson-Steger
* Holocaust by Maxwell Alexander Drake
* Wrap by Alex Bledsoe
* The Gift of the Dragons by Stephen D. Sullivan
* The Kid in the Park by T.L. Gray
* Duncan Derring and the Call of the Lady Luck by Bryan Thomas Schmidt
* Day of the Shadows by Donald J. Bingle
* Angels of Mercy by Erik Scott de Bie
* Heart’s Desire by C.S. Marks
* Spurn Babylon by Tobias S. Buckell
* Parting the Clouds by Bradley P. Beaulieu
* The Burning Servant by Steven Saus
* The Caretaker of Mire by Gregory A. Wilson
* The Last Incantation by Alex Shvartsman
* Welcome to New York by Addie J. King
* In the Glimpses by Matt Bone
* Coal: 1938 by Doris Stever
* Undivided by Marian Allen
* Among The Stars by Sarah Hans
* Sergeant Argent’s Moment in the Sun by Rob Rogers
* Sperare Victor by Tim Marquitz
* Shadowlands by Elisabeth Waters
* Wish Upon a Star by Janine Spendlove
* A Happy Mother Takes Away Pain by C.J. Henderson
* Katanoi by Philip Athans
* Don’t Wake Me Up by Tracy Chowdhury
* One Good Deed by Bryan Young
* The Battle Rose by SM Blooding
* The Ring by Timothy Zahn

Every so often, lightning strikes, and I get a good idea. :)

Thanks for the story contribution and all the promotion you've been doing for it. Much appreciated.

Mod
Well I really hope it does a lot of good, and you have some great stories in there - I'm really enjoying them.