Mod
CANBERRA, Australia (AP) -- When a dark intruder smashed through his
bedroom window and repeatedly bounced on his bed, Beat Ettlin at first
was relieved to discover it was a kangaroo.

"My initial thought when I was half awake was, 'It's a lunatic ninja
coming through the window,'" the 42-year-old told The Associated Press
on Monday. "It seems about as likely as a kangaroo breaking in."

But his relief was short-lived. As Ettlin cowered beneath the sheets
with his wife and 9-year-old daughter at 2 a.m. Sunday, the frantic
kangaroo bounded into the bedroom of his 10-year-old son Leighton
Beman, who screamed, "There's a 'roo in my room!"

"I thought, 'This can be really dangerous for the whole family now,'"
Ettlin said.

The ordeal played out over a few minutes in the family's house in
Garran, an upmarket suburb in the leafy national capital of Canberra.

Ettlin, a chef originally from the Swiss city of Stans, said he jumped
the 90 pound (40 kilogram) marsupial from behind and pinned it to the
floor. He grabbed it in a headlock and wrestled the trashing and
bleeding intruder into a hallway, toward the front door.

He used a single, fumbling hand to open the front door and shoved the
kangaroo into the night.

"I had just my Bonds undies on. I felt vulnerable," he said, referring
to a popular Australian underwear brand.

The kangaroo, which Ettlin said was around his height, 5 foot 9 inches
(176 centimeters), left claw gouges in the wooden frame of the master
bed and a trail of blood through the house. The animal was cut when it
came crashing through the bedroom window.

Ettlin, who had scratch marks on his leg and buttocks and was left
wearing only his shredded underpants, described himself as "lucky."

The kangaroo vanished into a nearby forest from where it likely came.
Wildlife authorities confirmed Monday they had received a phone call
saying an injured kangaroo had entered the caller's home and left.

Greg Baxter, a Queensland University lecturer on Australian native
animals, said kangaroos rarely invade homes but have done so in the
past when panicked.

"It is very unusual, but when kangaroos become panicked, they lose all
sense of caution and just fly for where they think they can get away,"
Baxter said.

Eastern gray kangaroos are common around Canberra's forested urban
fringe. They are so numerous at one defense department site in the
city that officials want to cull hundreds of the animals to stop them
ruining the habitat.

Although it had been a harrowing experience, Ettlin's wife could see
the funny side.

Mod
I want to live where kangaroos bounce into the house at night!!

He's lucky he wasn't attacked by a koala - Australia's sedate and gentle killer. They're huge.

yeah Kate, I found that hysterical myself.

They use the babies to hammer in those nails. The babies love it.

Mod
If I do lots of sit ups will I have rock-hard marsupials?

Only if you do them hanging upside down from a eucalyptus tree, naked.

I just flagged myself. It was great.

Self flagellation is not allowed here, Richard. Consider yourself in line for punishment. Charissa is in charge of that, by the way.

Mod
you flagged yourself without me? spoilsport. i think you're the one who needs to do sit ups hanging from a eucalyptus tree naked.

I think I need to lie down now.

Oh hey, Stephen Colbert posed a devestating Koala Pox epidemic which wipes out America's livestock as a possible apocolyptic scenario on his segment "Doom Bunker". Could he be foreseeing the future? He has been known to predict with eerie precision (at least for the Oscars nominations).

I just knew koalas were too cute not to be evil.

Koalas are so NOT evil....the most evil thing I have ever seen them do is pee on an American tourist!!

"Koalas have been known to line their pouches with crocodile hide."

Steve Irwin was killed when he tried to wrestle a full-grown koala out of a tree.

Don't be fooled! The man in this picture lost his hand shortly after this photo was taken.

Mod
Steve Irwin was wrestling a koala out of a tree underwater? damn, that man could do anything. oh wait, except survive.

Steve Irwin wrote The World According to Carp.

He wrestled them onto the bank and interviewed each of them personally.

Contrary to popular belief, he did not invent stingray serum.

Mod
He did, however, believe he could be the first man to create inter-species offspring by coupling with sea life.

Steve Irwin= dumb ass who through complacency lost his healthy respect for nature, and paid the price for it.

Hey! don't get all misogynistic on me now. That would result in spankings.

I've wrestled crocs. If I practice, I'm sure I'll be able to toss them over the hedge eventually. They suppress my libido and must be punished accordingly.

Mod
do the crocs lay down on your libido? that must be uncomfortable.

Mod
This is what comes from not following instructions, I say. Are Australians not required to "tie me kangaroo down, sport?" And are instructed to not just once, but repeatedly?

And then watch me wallabys feed.

Was Steve Irwin's hide tanned? And is that it there, Fred? Hanging on the shed?
(And I don't mean the tanned hide that Charissa wants!)

You're closer than we are Debbie. Go over and touch it.

Did you poke it with a stick first?

These are the crocs that weigh so heavily on my libido. 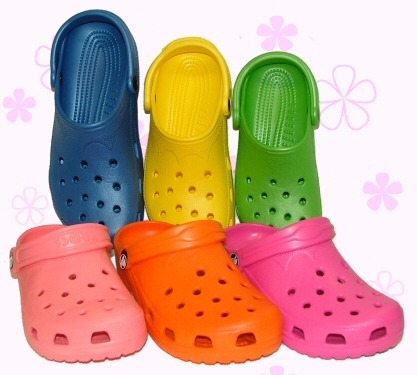 She wears all six at the same time. Should that be cause for concern?

Mod
depends on where she wears them I suppose. If she's stuffing them up her hoo hoo I can see where that would put a damper on things.

I thought they dispensed with earrings like those in the eighties?!!

If she's stuffing them up her hoo hoo I can see where that would put a damper on things.

That made me snort water out my nose, Char. Thanks.

Don't let the bright colours fool you, ladies, these are not battery-operated self-stimulation devices.

Mod
all the more reason she should not stuff them up her nether regions.

I'll pass on your advice - a hoo-hoo win-win if ever there was one. Have you ever considered career in marriage counselling?