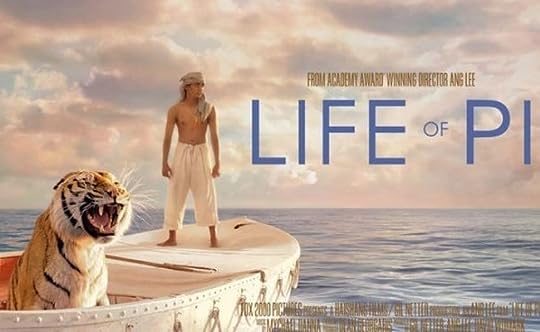 Wow, haven’t I already heard for the book, after seeing so beautiful trailers and posters for the film adapted from the book, I would have bought it at once. Now we are talking not about The Hobbit, but about Life of Pi by Yann Martel :)

The book itself should be discussed in the other thread, so not to spoil the reading for those who have already seen the film, currently in our cinemas. But of course, here you may make comparisons with the film if you have already read the book, but please use spoiler tags whenever you would feel necessary :)

Mod
I've just seen the film and liked it very much. I adore animals, so I really liked seeing Pi building a sort-of relationship with a tiger, same as I liked all magnificent nature sequences, like that one at the beginning and all those in the water and the island. I absolutely love meerkats! I wanted to see the film first, before starting to read the book, as with this one I felt "knowing" the book contents would spoil the experience. Now I can move onto the book :D

A bit off topic now -- I've seen this in 3D, as no other version is available in our cinemas. However, I think I would enjoy the film just the same if I've seen it "normal" way, because there weren't so many wow moments, at least I haven't felt them. The beginning was the most awesome of them, the others not so. Maybe 3D works better with action movies than with these rather calmer ones. I haven't had much experience with 3D technology.

I finally saw the movie yesterday, because I wanted to read the book first. I heard that they are slightly different and that the book ending may be slightly better because of this tiny difference. I liked both the book and the movie - book for it's spirituality and the movie for the wonderful visual effects and awesome animals...

I am not sure what I am allowed to write at this point, since there are no comments except for Zeljka and myself > does that mean noone else saw the movie?!?! I don't want to spoil it for anyone, but I really want to dicuss the ending!!! :D

Mod
Elena wrote: "I am not sure what I am allowed to write at this point, since there are no comments except for Zeljka and myself > does that mean no one else saw the movie?!?!"

Lol that puzzles me too :) I've read book recently and really loved it. As I liked also the movie, very very much, I now wish to see it again, but I'll have to wait till it comes on DVD. I think Ang Lee and his team really deserved those Oscars. The movie was really awe inspiring.

Well considering noone else is saying anything, i'll just write my opinion and tag it as a spoiler :)

After reading the book, I was torn about the ending, (view spoiler)[ not quite knowing whether to believe the first or second story - or, more precisely wanting to believe the first story, but realizing that the second one was probably more realistic. However, there was still some hope in my mind that the first story is the true one, because it was so much more "spiritual"... and the way Pi seemed to be angry with the Japanese men for not believing him, I thought maybe he is just telling them the second story to give them what they want to hear and make them go away... (hide spoiler)]. And then I saw the movie! Movie's end is much the same, except that when Pi is (view spoiler)[ telling the second story to the Japanese men, he seems to be in pain, he cries and displays emotion that leads the viewer (at least me!) to draw the conclusion that this is undeniably the true story since this is the one that has made him so upset... In the movie it seems more clear cut that he breaks and tells the truth at the end... Whereas in the book he seems angry that he has to come up with the second story and that they won't believe his first... (hide spoiler)]... Either way the message remains the same "So it is with God"...

I just saw the movie on DVD and I agree with you, Elena, about the endings. The movie was in line with the book for most things. They left out the blind man towards the end, that Pi encounters (minor details). I thought that the island was a bit different with their explanation (acid vs. sea-water fish dying in fresh water). Overall, both movie & book were good.

Mod
I read the book about 6 weeks or so before seeing the film, so most of the details were fairly fresh in my mind. They left out the other blind man and the conversations with Richard Parker, scenes which would have been extremely difficult to film anyway and really only work in the book. (Made me think of the prologue to Water for Elephants, actually.... it sets the tone for the whole book, but is totally impossible to film without giving it away!) I don't think the film lacked anything because of this, though. You certainly felt the lack of credibility of the carnivorous island, but you were fully drawn into the story anyway. Of course, the book is much better, but I thought the film did a great job of carrying the spirit if the book.

Life of Pi (other topics)