"A New Year's resolution is something that goes in one year and out the other."

Great beginning to the new year!

The love of learning, the sequestered nooks,
And all the sweet serenity of books.

Ooooh! That quote makes me want to snuggle in front of our fireplace to read. Our cold weather finally arrived, so we've been able to light up a fire daily this week. Such a pleasure to read with crackling nearby!

Madrano wrote: "Ooooh! That quote makes me want to snuggle in front of our fireplace to read. Our cold weather finally arrived, so we've been able to light up a fire daily this week. Such a pleasure to read with c..."

Done! My sister brewed some homemade kahlua as a holiday gift. Wonderful addition to hot drinks. Or cold, with half & half. YUM! The fire last night crackled with beauty. DH tells me that's the crepe myrtle logs, culled from our own lawn. Homey sound.

I can't go back to yesterday - because I was a different person then. 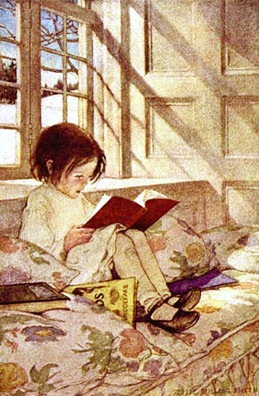 What a sweet image and terrific sentiment.

Alias Reader wrote: "I can't go back to yesterday - because I was a different person then.

For remember, fear doesn't exist anywhere except in the mind.

I've decided to stick with love. Hate is too great a burden to bear.

History will have to record that the greatest tragedy of this period of social transition was not the strident clamor of the bad people, but the appalling silence of the good people.

That last quote is new to me. I guess this is where Nixon's people got the "silent majority" idea.

It's a quote that I've had on the bulletin board near my desk for ages. I cut it out from a copy of Readers Digest.

"There are two ways of spreading light: to be the candle or the mirror that reflects it."

Well, i've never had that happen here. The photo of the art Carol shared slowly, slowly appeared, from top to bottom. How curious. It's a lovely painting and a good quote. Thank you for both.

Alias, i like the Fran Lebowitz quote. I have a series of quotes i collected when i read her Metropolitan Life a decade or so ago. Sometimes she appears as a judge on "Law & Order", too. http://www.imdb.com/name/nm0495877/ I see from the link that she asked for a role on the show! If you have the time, click on the "See More Trivia" link for several of her quotes. Here's one, "Spilling your guts is exactly as charming as it sounds."

Madrano wrote: "Well, i've never had that happen here. The photo of the art Carol shared slowly, slowly appeared, from top to bottom. How curious. It's a lovely painting and a good quote. Thank you for both.

Same here. I think the issue is the picture is in color and very large.

It's a very lovely painting her her.

She certainly was a beautiful child. She looks like a model in that painting.

Ah, so much easier, Carol. Thanks.

"A woman must have money and a room of her own if she is to write fiction."

Good advice about the money for all women.

As much as i value that Woolf quote, it's obviously written by someone without children. What i always lacked, in addition to the other two, was silence enough to write!

And i'd add that the room is almost more necessary for nonfiction. Where else do you sort & store your research? LOL--and STILL i find the quote excellent.

"all one needs in life is books"

A long habit of not thinking a thing wrong gives a superficial appearance of being right.

Once the game is over, the king & the pawn go back in the same box.

"I'm always amazed that people will actually choose to sit in front of the television and just be savaged by stuff that belittles their intelligence."

I always amazed by people who have to watch TV. Even when they say, "there is nothing on". However, they continue to watch some random program that they are not enjoying. I'm baffled by this.

Some people I know just like the TV on for "background noise."
What's wrong with silence?

Give me silence any day !

"The price of anything is the amount of life you exchange for it."

"To learn to read is to light a fire; every syllable that is spelled out is a spark."

“He did not study God; he was dazzled by him.”
― Victor Hugo, Les Misérables


“In joined hands there is still some token of hope, in the clinched fist none.”
― Victor Hugo, The Toilers of the Sea


"Tomorrow, if all literature was to be destroyed and it was left to me to retain one work only, I should save (The Book of) Job."
― Victor Hugo, executableoutlines.com/job/job_01.htm

Interesting one about book of Job.

Both Les Miserables and The Book of Job are my favorites.

"How can you frighten a man whose hunger is not only in his own cramped stomach but in the wretched bellies of his children? You can't scare him -- he has known a fear beyond every other."
--John Steinbeck, The Grapes of Wrath


“And this I believe: that the free, exploring mind of the individual human is the most valuable thing in the world. And this I would fight for: the freedom of the mind to take any direction it wishes, undirected.”
― John Steinbeck, East of Eden


“And then Kino stood uncertainly. Something was wrong, some signal was trying to get through to his brain. Tree frogs and cicadas were silent now. And then Kino's brain cleared from its red concentration and he knew the sound- the keening, moaning, rising hysterical cry from the little cave in the side of the stone mountain, the cry of death."
― John Steinbeck, The Pearl

I can't imagine how difficult it was for farmers and their families, year after year, living during the Dust Bowl. So many children dying from pneumonia. The huge black, blinding dust storms that left mounds of sand (like snow) blocking doors and windows. Thank God for Steinbeck's The Grapes of Wrath.

The first time I read Grapes I cried at the end. It was so moving. I seldom read books twice, but I've read this one twice.

The Norton Critical edition of this book is excellent.

The difference in winning & losing is most often, not quitting.
-Walt Disney

The history of the Victorian Age will never be written: we know too much about it.
-- Lytton Strachey
(bday 3/1/1880) founding member of Bloomsbury group & author of Eminent Victorians.

That quote always gets me.

Years ago, I was coming home with my dad on the subway. We were coming home from Sloan Kettering hospital. My father was around 85 years old and a bit frail. At our stop my dad and I got up to get off. An older black man, who was a bit disheveled, was standing in front of my dad, and my father told him to go first. The man said, "he sees me." And smiled.

I guess he was used to people just pushing him around as if he didn't matter.

That touches my heart . . . thanks Alias.