Starting a thread for my poor Fergus who doesn't get enough love :)

Lori, thanks for starting this thread. I've always had a special place in my heart for Fergus even though he's a very conflicted character; especially once he's in America.

I see him as an adult being played by Ben Barnes. 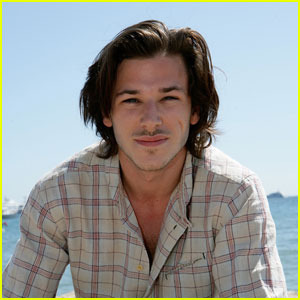 Lori, I have to admit I'm not partial to red haired men either, so I often have a hard time picturing what Jamie looks like. The best I've been able to do is picture Chris or Liam Hemworth with dark auburn hair. Ben Barnes is more the "look" that I prefer in men, but I admit it's cause I like pretty boys. Never heard of Gaspard Ulliel but he is super hot and just my type!

Jay wrote: "Lori, I have to admit I'm not partial to red haired men either, so I often have a hard time picturing what Jamie looks like. The best I've been able to do is picture Chris or Liam Hemworth with da..."

I usually try to picture BB with brownish red hair, or auburn. That's about as much as I can do. Nothing against red heads! I think red hair on women is very pretty!

If I had known the age progression in these books, I'm not sure who I would have visualized. It's really going to be hard for the casting.

Ben Barnes is the only movie star crush I have. Even though I think he is a really lousy actor, I think he is so attractive. I heard that he is dating Amanda Seyfried now after dumping his girlfriend of at least 5 years, Tamsin Egerton. Kinda sad to hear that, as his longtime girlfriend seemed classy and Amanda sure doesn't IMO.

I wish I could picture him as Jamie but he seems too thin and weak. I'm not really into beefy guys though so I still find him much more attractive than a Chris Hemsworth type. The only time a really muscular guy has seemed hot to me was Chris Evans in Captain America. Hayley Atwell was a really strong woman in that film so I could see her making a great Claire as was suggested.

(spoiler) i wonder if fergus would ever claim his birthright. okay so he said he wouldn't. but it would be a nice thing for his family who has been to so much because of the revolution.

My guess is that there may be too many strings attached to his birthright.

Possibly, but we are also not to the French Revolution yet (1789), and THAT could throw some interesting twists into the story, too! Diana being the writer that she is!

Never thought of that one. Very interesting, though.

So I have been re-reading Dragonfly in Amber, doing my own personal re-read since I read the MOBY. I had completely forgotten about what happens to Fergus the causes the whole miscarriage and everything. It had been so long since I read it and so much more had happened to all of them and they had all grown so much that I completely forgot about it. Now looking back on how his character has developed up until this point it is had to reconcile the young Fergus with the father Fergus. Maybe he was just at the right age so it didn't stay with him forever. But I for one think he definitely should get more credit than we all give him.

Oh I give Fergus a lot of credit. He makes mistakes and sometimes does not do what I would hope but he is a good person that has had a lot of crap happen to him in his life. I love Fergus and his family. His life is so blessed compared to what it likely would have been with out Jamie.

Fergus had a horrible time until Jamie 'hired' him in Paris. He thinks differently than most because of his background. Say what you will, he is loyal to Jamie, and in turn Claire. His problems in later books comes from being totally a fish out of water as he is taken from the life he knew to the country. I hope he will find his stride.

i love Fergus. The momma bear in me comes out. I love his character, his strength and extreme love for Jamie.

He gets messed up in the colonies, but he does love his wife and children as well. I have hopes that he will come to terms with himself and settle into his role as father and husband

I love Fergus, from the first time he entered the story line. He is loyal to Jamie and loyal to everyone who is tightly aligned with. As a man he is a image if Jamie he easily moves into leadership roles and takes cues from Jamie's looks. Basically he is Jamie's right hand man. He is a powerful part of who the Fraser's are, loved by them all even if he is a bastard and has one hand. Jennie see's him as her son along with the rest of her many bairns!

Fergus is so great. For those who didn't know, 10-year-old Fergus has been cast for season 2 of the show. Romann Berrux, the actor cast, is a French 13-year-old whose photo will not paste into the comments. As for Ben Barnes, I picture him as Young Ian.

I love Fergus and am often disappointed with Claire in her lack of mothering Fergus. As a mother of an adopted child, my heart breaks when Claire refers to Fergus as "my servant" or "he's Jamie's". (DIA). He's so lovable, and needs the nurturing that only a Mom can give.

The latest clip on the starz youtube channel has footage of young Fergus! Plus a better look at Mary Hawkins- the two characters I most look forward to in the Paris part of season 2. (Though my love for Roger Wakefield is unsurpassed)

Carol wrote: "Possibly, but we are also not to the French Revolution yet (1789), and THAT could throw some interesting twists into the story, too! Diana being the writer that she is!"

The mystery of Fergus' inheritance could indeed bring Jamie and Claire into France in 1789. If Fergus somehow goes to France to investigate that inheritance a year or two or three before then, and is detained; he could then be at great risk due to his supposed paternity. And Jamie would go to France to get him out; perhaps Claire as well.

I actually want Fergus to get at least some of that inheritance, and lots of money, so that he and Marsali don't have to struggle so much...

The struggle is the journey though...

Pat wrote: "Carol wrote: "Possibly, but we are also not to the French Revolution yet (1789), and THAT could throw some interesting twists into the story, too! Diana being the writer that she is!"

oh i love that, i had forgotten about the revolution !

Yes, but the French Revolution will come about eventually; and unless Diana ends the series before that, the upheaval could provide one heckuva drama; and Fergus does have some reasons to go to France.

I just looked up Romann Berrux, and wow! Perfect for young Fergus. Could he look more French? I have to believe that he's played Gavroche in Les Miserables on some stage...or he should have!

Remember the scene in Echo where Claire warns Jenny's son Michael, who has taken over Jared's wine business in France, of what is to come and that he should move before the rebellions start.

The newest shots of Fergus...omg I wanna scoot him up and cuddle him to death! My wee little Fergus! Especially knowing how he turns out. Sigh.