Is that a bat or a dog in my backyard? discussion

Mod
Want to create a werewolf? Please answer the fallowing and wait to be accepted.

Appearance: (please put at least a paragraph and a link or a photo.)

Werewolf appearance: (another paragraph and link or photo please)

History: (at least a paragraph please)

Appearance: http://www.mrwallpaper.com/wallpapers...
Arzu is a 5.7 foot girl with straight blonde hair. She has green eyes and flawless skin. Her hair goes about down to her shoulders. They are a bit spiky at the ends too. Se has bright blue eyes that shine brightly. She usually dosen't wear make up but will sometimes use pink lipstick. She wears jeans and a t shirt. She hates wearing shoes in complaint that she can't feel the earth.

Werewolf appearance: http://www.flickr.com/photos/johnyday...
Arzu's wolf form is a medium sized wolf. Her fur is a mixture of grey, white, and black. There may also be a hint of brown. She has long legs that make her fast. She has amber eyes unlike her human form. Her fur is sleek and glossy.

Personality: Arzu can be a bit bossy at times but can also be really sweet. She is loyal to her pack and will do anything to protect it. She loves to fight and hunt but prefers human food instead of raw meat.

History: Arzu was an orphan when she was ten years old. At after a year of trying to find a home, there was no hope. No one wanted her. At twelve the orphanage keeper saw her in her wolf form and kicked her out in the forest. She was by herself for two weeks, hunting on her own. Starting her third week alone she found the pack. She was accepted into the pack as a hunter and soon became the beta after the old alpha died. When she was fifteen the other alpha messed up and she took her place as alpha. She now runs the pack strongly and surely.

Appearance: (please put at least a paragraph and a link or a photo.) http://www.google.com/imgres?um=1&amp...
Diabhal is a 6'5 guy with red hair. He has green eyes and pale skin.His hair is sorta short and wave. He wheres a digital urban camo jacket and pants and a plain green t-shirt. He wheres flip flops and has a gorilla tattoo on his arm.


Werewolf appearance: (another paragraph and link or photo please) http://www.google.com/imgres?um=1&amp...
Diabhal's wolf form is a large sized wolf. His fur is a mixture of white but it is mainly ginger. He has powerful legs to keep him up in a fight and maintain his speed. He has green eyes . His fur is ruff but soft at the same time.

Personality: (please 2 or more sentences) Diabhal is kind and gentle but he can fight and win if he has the right determination. He helps those he can no matter what species or race they are

History: (at least a paragraph please) Diabhal was placed on the doorstep of an orphanage when he was a new born child. He helped the teachers and caretakers when he could and protected the weaker kids as he grew up in the orphanage. He ran away from the orphanage at 8 and tried to join a pack of werewolves like himself, but was shunned and kicked out because of his ginger fur. He grew up alone not letting that encounter damage his personality and hunted, trained, and fought for himself up to this age, he has no pack for he is a lone wolf

Other: He likes gorillas 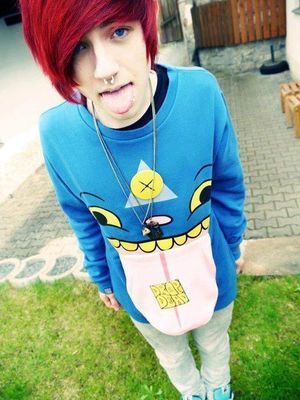 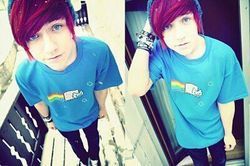 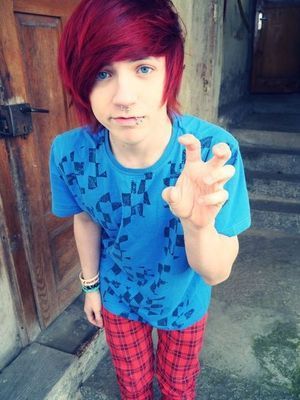 Werewolf appearance:
~except with his blue eyes~ 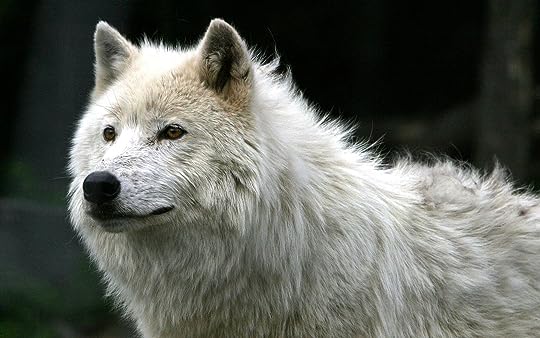 Personality: Very peppy and nice. Malik likes to look on the brightside of every situation, and it's kind of refreshing to have someone so happy with you. He's very funny and bubbly, which makes him easy to talk to. Some people think that since he's so out there and tries to make friends with everyone that he's weak, but he is in fact an outstanding fighter. Quick and deadly.

History: Malik has been off on his own since age 13. He had been passed from relative to relative (due to the fact his parents died in a house fire when he was 9), but no one really wanted him so he just ran away before a train ride to his Aunt Linda's.
Malik has always been sorta quirky, what with the crazily dyed hair and sneaking out of the house at midight and not coming home till noon the next day always smelling oddly of dog with hints of blood. Everyone just kinda thought he was a physco maniac who killed gerbils or something for fun and was in some weird demon worshipping cult, one of the reasons no one wanted to keep him around.

Family: Technically he has an overwhelming abundance of aunts, uncles, and cousins but when you get right down to it no one accepts him into the family.

Other: Welp, he's gay...and has a pretty extreme case of dyslexia.

Mod
You can be a omega, beta, male alpha, hunter, or fighter for the rank.

Wish I had a turtle just chillin in my pocket for decorative purposes :ooo

Mod
I GOT IT CAUSE I AM THE TURTLE OVERLORD

Is that a bat or a dog in my backyard?