I try to read 150 Books this year.
I also challenge myself to write reviews for every book I read, witch will be in German, but you will get a smaller opinion here for every book in English as well.
I also have planned to finish 2 boxed complete works witch I will list here as single books... but GR counts them as just one book.
So when ever you encounter Samuel Pepys or Kurt Tucholsky, don't wonder that there isn't a proper link to the book.

April: none
May: none


This is just the introduction to the diary's of Samuel Pepys. It is a small book with a nice foreword by Robert Louis Stevenson combined with useful information about the time, his life and some of the people I will encounter throughout the books.

It was a little boring to read, but it was the right thing to do the companion first because it contains a lot of stuff that should be known up-front... and it gives not much away which I didn't already know about the diary itself.

This was one of the best books about 'How-to-write" I read. The autobiographic parts are interesting enough even if one doesn't want to become an author, and Stephen Kings advices are easy to understand and mostly not the kind "You have to do it that way!" I've encountered before in other books.
And then there was this wonderful little short-story „Jumper“ by Garret Addams... and a reading-list, I love reading lists :)

Why this one?:
I needed another English book for this month, and it fits in the January-Challenge because I was married May 5, 2000.

How & why this Book came into my possession:
I didn't know it existed before stumbling upon it here on GR... some month later I found a used copy at a book-fair called "Büchermeile" on the "Rhein-Ufer-Promenade" here in Düsseldorf. 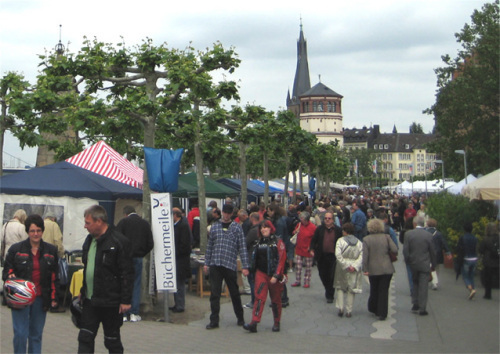 Books lead to books?
I mentioned the "reading-list" already and of cause, in time, I may read another King book or one of the old favorite one's

Samuel Pepys runs around a lot, when he is not running from A to B or C, he drinks something with chaps, eats lots of meat and seafood and worries about money. First because he has none, after beginning the Restauration of Charles II, because he has some.
He moves upwards on the job and social-status scale and reads a lot of books... and runs around a little bit more.

I'd known beforehand that a diary contains a lot of stuff that's mostly boring, but knowing that, it became an interesting read never the less.
We don't learn a lot about English history in Germany, but this diary fills in a huge gap for me... and it has a lot of small details which are fun for a history nerd.

What should I criticize a book half written by a deadly ill man? I can't and I won't. It's in some ways an angry book, and in other it let's you deep in the mind of Christopher Hitchens.
Best of all, it felt honest. He never covert his mouth, he didn't do it while dying...
It's a personal book and because I liked the guy and because I can't think straight when it comes to cancer it is a real personal thing. One between him and his writing and between me and the pages.

A real little book, that a fast speaker could maybe put into an Oscar speech... but also a funny little thing by a teenage Jane Austen. Nice to read, with glimpses of a great author in progress.

What a wonderful written story, full of emotions and beautiful language, something to love and something to hate inside and asking big human questions. It's a light, moving thing at the same time gets sometimes so heavy, hard and disgusting. It's a great novel with eternal motives...
I simply loved it.

Thanks to the buddy read and this group, witch encouraged me to pick it up now, and not to wait a day longer, I now have another favorite.

Short stories, some very good, some I couldn't relate to, from realistic to mystical and some fairy tales. A huge mix, and most of it with sad, and dark and gloomy. It confirms the cliche about Hungarians, who stand all near the edge, one step away from committing suicide.

A nice little book of an ordinary guy, who does something unexpected. I loved nearly everything about it. The writing style, the themes, even the sad parts were in their own way quite beautiful.
Harold, socially awkward, as he is was a fascinating and complex character.

A German Childrens-Classic from 1929. Two friends, the little rich girl called Pünktchen and Anton, a boy with an ill mother and poor, fight against not so nice older people and protect Pünktchen's family from being robbed.

I prefer Erich Kästners adult books and his poetry, but there is a reason why he is mostly remembered for is children's books. They are funny, but they also take children seriously.

I've read it multiple times but never in English, this is now done, and it never get's old. I love the story, the characters, the writing style. There are a lot of Tolkienians out there, I'm a Hobbian ;)
(but not a Hobbit)

A really interesting read, about all the artists, writers, actors... who left Nazi-Germany. First published in the US 1939, it was translated as late as 1991 into German. Years after Klaus and Erika Mann, the children of Thomas Mann died.

Love me some Homes and Watson, especially the little nit bits about there relationship keeps me reading... also remarkable for me, are the appearances of Mycroft and Moriarty... but I try to forget the Reichenstein-Falls.

This book was the right choice for the task "A genre outside of what you normally read". It was a tough nut for me, I've tried to read it two times before... and never got through it. I learned something from it, but I could not and would not say I have one bit of knowledge about the theory of relativity, quarks or string-theory. I just can't wrap my head around all of it... even if Hawking did his best to make me understand. I'm no physicist, not even a layman when it comes to matters of time, space and the speed of light.

A small book, ideal as a gift for nerdy dads: The Adventures of Darth Vader and 4 year old Luke... My Husband and I bought it, read through it in the entrance hall of the cinema and finished it in 20 Minutes. Not every page is a really good joke but it's good enough...