Anyone else read it? Kind of engaging and off putting at the same time.

I've been away from Spidey for a while, though I was intrigued by what this big build up would be. Read what happened and whilst it is "disappointing" where things are going, we all know it's only a matter of time before things get "fixed".

Part of me wants to jump in just to see how the "fixing" happens.

Didn't want to be the 1st person with spoilers hence the vagueness :)

I did, however, like the mini story at the end that was written by J.M. DeMatteis. A lot. It was sweet and nostalgic, and i dare say made it worth the purchase.

I will have to read Superior Spider Man to see if the idea bears fruit. It kind of has a built in back door to it.

The art seemed kind of lackluster too. They should have had Joe Quesada draw it. 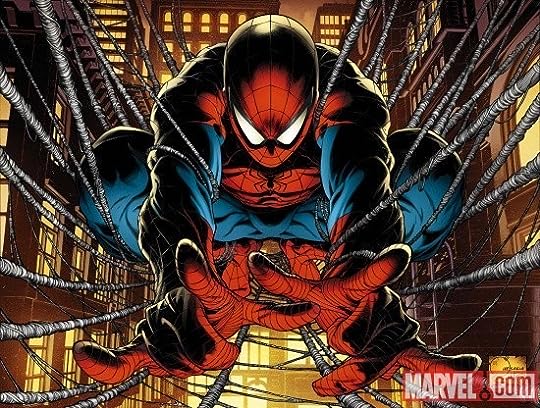 I think all this "revamping" Marvel and DC both have done is a mixed bag and kinda completely unnecessary. Have you read the new Fantastic Four or FF? I have loved the art in the main Avengers title too

reply | flag *
message 8: by [deleted user] (new)
Dec 30, 2012 09:18PM
The comic industry (especially the big two) do this kind of thing every 5 years or so, though. Usually it is just with storylines, but this time around, they seem to be doing it with the branding as well. I haven't checked out any of the new marvel titles in earnest with the exception of All New X-Men because I really like Bendis and love the idea that the original lineup is coming back. A few of the issues have been a bit too punchy punchy 'splosion for my liking, but I am going to give it a few more issues to redeem itself with some character/story development.

Also, what I've seen of Hawkeye is promising, but my heart belongs to BKV. Saga is the best thing out there right now. I never thought I'd be collecting single issue comic books again, but Saga brought me back!

I perused the issue, and I know the end.(view spoiler)[ I don't think they can properly call killing off the main character s surprise ending anymore. In fact, when comic companies say they have something big planned for a character, I just assume they're going to die. I will say that where they left it, with Doc OC in Spider-man's body, makes for some interesting possibilities for future stories. Also the title, Superior Spider-man, sound so Nietzschian, I almost can't help but be intrigued. (hide spoiler)]

Right now the only Marvel book I read is Kelly Sue DeConnick's "Captain Marvel." Which has been, so far, blissfully untouched by MARVEL NOW.

I used to read Marvel Comical 15 years ago and I took advantage of the restart to try the new series and I have to say I am not very impressed. It feels like Marvel is trying to milk as much money as possible with the majority of the titles at 3.99$ and the most popular of those releasing twice a month.
I had never before read any Dc comic and I have to say on the other hand I am very impressed by the new 52. The new Batman serie is awesome and Green Lantern and Justice League are pretty good. DC pricing seems better too, a lot of titles are 2.99$ (batman and justice league are only one at 3.99$ I can think off) and DC shaves 1$ of the digital version of a comic once the next issue has been released ( others publishers do too but not Marvel)

And yes like someone said earlier Saga rocks, it's in my top 3 with Batman and Walking Dead.

Aildiin wrote: "And yes like someone said earlier Saga rocks, it's in my top 3 with Batman and Walking Dead."

Those are my 3 main monthlies. Great stuff!

Tamahome wrote: "The art seemed kind of lackluster too. They should have had Joe Quesada draw it.

"
If Joe Quesada drew it we would still be waiting in 2014 for him to finish.

hawkeye is wonderful, if you arent reading it you should

I've heard about the "big event" in Spider-Man, and as with everything the big two do, it will last for as long as they can milk it for publicity. I don't read mainstream comics any longer because they seem to be stuck in a creative downward spiral. I read independents titles from publishers like Valiant www.ValiantUniverse.com.

I had a discussion with an industry friend who gave me the payoff to this story, here it is: in two years things will go back to normal and the Parker curse will destroy relationships and whatnot. Peter will have to come to grips with how the changes in this issue were better than he would have done, and a certain thing from OMD will be fixed, and Peter will have to deal with that too. The entire story will be two years of this situation followed by two years of Peter reacting to this situation.

I love this idea. I love that even Lex and Superman have never done this and I think that once I knew this was a big arc and not a permanent change I found I had to be on board. I am also having a great laugh over Spidey fandom eating itself up over the change. It is brilliant. Think of two years down the line when Peter is all "How could you not know!" with all his friends, with MJ especially! It's going to be epic Parker! We always want writers to do something different and when they do, we complain about how it's not the same.

It's gonna be a wild ride.

cool save me a ton of money and the trouble of reading it.

Jim wrote: "I had a discussion with an industry friend who gave me the payoff to this story, here it is: in two years things will go back to normal and the Parker curse will destroy relationships and whatnot. ..."

I had my money on six months of the current situation, followed by a year of aftermath. That's the norm for one of these arcs.

The new Spidey situation will last until Marvel next needs to relaunch with all new #1's to try and boost sales. I give it til mid 2014 and then we'll get the all new Amazing Spiderman #1 with Peter Parker back in full control.

While the current story is well told for what it is, comics have become very predictable.

I stopped reading Marvel Comics in the late 90s when they axed 'Alpha Flight' and 'The Inhumans', I've mostly read DC and Image since then.

Both DC and Marvel have been gobbled up by the media conglomerates, Time-Warner and Disney, respectively. As such, there goal more than ever is to increase brand value and profits, rather than truly caring about the creations of another generation. Maybe I'm getting to cynical, but not even death is permanent if it impacts sales, such as the Death of Superman arc proved. As for hero/villian body swaps, just look at Dragonball Z with Goku and Captain Ginju, or if you want Superman losing his body to a bad guy look at Adventures of Superman #424 and Action Comics #584 (from Jan 1987).

As much as I hate to see my favourite characters get killed off, I wish they'd stay dead and let's deal with the full implications and changes that wreaks on their universe.