Around the World in 80 Books discussion

I'm starting this in 2013 as I seem to have been a bit lazy this year in my reading. Hopefully I should read from more than 24 countries but I know I'll never get to 80 in a year. 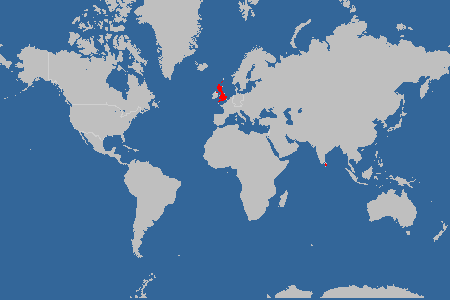 ASIA: Sri Lanka
Anil's Ghost,by Michael Ondaatje . I've been laying in bed finishing this for the last few hours - a perfect way to start the new year :) Anil is a forensic scientist who returns to her home country of Sri Lanka during the 1980s/90's civil war. Her return is through invitation by the Human Rights Comittee and yet she finds doorways blocked and data withheld much as you would expect. Her discovery of 'Sailor' a body buried within the last 5 years at a government restricted archeological site is the basis for the story.
The language is beautiful, the pace moves well and you are constantly kept on your toes. A recommended read.
On my tbr pile since March 2011

MIDDLE EAST: Isreal
The Good Man Jesus and the Scoundrel Christ by Philip Pullman
Read in the space of a day as the type is very large and the chapters well spread out. Pullman writes for the Cannongate Myths Series a retelling of Jesus' life. In Pullman's version Jesus is a twin, his brother Christ writes and reshapes Jesus' actions and teachings creating the modern church.
As a non-religious person this is an interesting take on the story, the sparse language reflecting the gospels and Pullman's own discussion of how and why he wrote this book an added bonus, however I'm sure it has the potential to upset a few people.
It was interesting to read this as a few months ago I was writing an essay on Pullman's Dark Material's trilogy in which I had to look at whether he was a 'sinister' writing imposing his own views on the church on innocent, malleable children's minds. One newspaper (The Daily Mail - I think) claimed he was the most dangerous man in Britain because of his depiction of the Church in that trilogy, it would be interesting to see what they made of this book!
Regions 2
Countries 2

CARIBBEAN: Dominica
Wide Sargasso Seaby Jean Rhys
This was a reread for me and I think I prefer it the second time around. I am rereading this and Jane Eyre as I am witing an essay about the voices in these two text this month.
The novel is a prequel to Jane Eyre which tells the history of Bertha/Antionette, a glimpse at her life in Jamaica, the life of a Creole family who live between the Black people who despise them for their wealth and the White people who despise them as they are of mixed race. The family live against the vivid backdrop of the Caribbean islands. The family madness, which is recounted in JE is shown developing and being provoked by this hatred of the Creole people and their treatment.
The text has mixed narratives between Antionette's memories, dreams and that of her husband. The voices of gossip, obeah and a stream of consciousness also haunt the text.
The text is split between Jamaica, Dominica and the UK, but the largest section is set in Dominica.
Regions 3
Countries 3

EUROPE: England
Jane Eyre, by Charlotte Brontë. I had read this previously as a teenager, this reading was carried out as I was studying this book which changes the way you read anyway. I still enjoyed this but found Jane a bit too sappy.

EUROPE: Germany
The Lighthouse by Alison Moore
This book is about a newly single man taking a walking tour around Germany as a way to consider his past, he frequetly recalls a past walking holiday in Germany and life in Cornwall. Alongside this is the story of a German hotel owner. Not a book that I was overly impressed by.

NORTH AMERICA: Central America
East of the Mountains by David Guterson
The lead character in this book is dying of colon cancer and sets off on a journey with the intention of commiting a suicide which will look like an accident (this is all revealled in the opening few pages). He journeys through Washington's apple country. The story is romance to the beauty of the landscape, as Ben travels he experiences many things and comes in contact with lots of interesting characters. The only promblem with this book was that I had guessed the ending from the first few pages.

NORTH AMERICA: Canada
The Cinnamon Peeler: Selected Poems by Michael Ondaatje
I enjoyed some of these poems by Ondattje but I found too many a bit juvinile and silly.

EUROPE: Greece
The Magusby John Fowles
[The Magus] by [[John Fowles]] Nicholas Urfe is a fairly typical young man, fairly intelligent and attractive he drifts from job to job, meaningless relationship to meaningless relationship. When offered a job in a remote island of Greece he quickly jumps on board despite having many reservations, including his recent off-on relationship with Allison.
Once in Greece he becomes quickly board with his teaching job and explores the remote areas of the island, discovering Conchis a reclusive millionaire he quickly becomes entangled in a mind game. Meeting many figures whose identity and stories change, develop and fall back on themselves Nicholas is placed in the middle of an experiment/game.
As a reader I wanted to scream at him not to return, not to ask so many questions, just to enjoy the beautiful girls, to stop being blind etc and yet like him I would learn a new story and quickly accept this despite being aware that a few pages later all would unravel.
Well worth a read and certainly an author I will be picking up again sometime soon.

Around the World in 80 Books