Into The Woods discussion

68 views
The Woods > The Woods

Mod
During the Day: 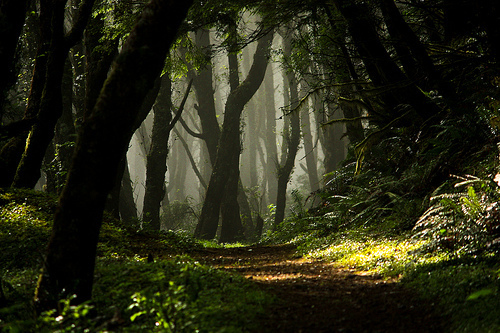 Mod
Somona walked towards the exit of the woods,wearing a white gown and a gold cloak.She had the hood over her head.She was disguised in her human form.She hoped that once she reached town she would find lunch.There better be at least one man who will fall under my spell...

Zoe Stalked among the trees, searching for prey. She eyes were glowing red and her instinct was going wild. Desperately she searched for a source of meat that she could sink her teeth into. She couldn't even think strait, the trees whirled around her and the moon was all too bright. "Musst" she whispered, but any human part of her was lost in this terrible need to kill.

Zoe Hissed at the newcomer, her eyes glowing so red that their light projected on to Thea's face. Her wings were quivering, Knowing that they had found another meal, but something about this one made Zoe hesitate. There was something odd about her, something not quite human. "What....what brings you here?" she voice was barely human anymore. It was the growl of a terrible beast awake within her.

Zoe growled then smiled a mean, evil smile. She was inches away from the girl. She put on her most charming, human- like smile She had. " I believe I can help you find your way out." She smiled, silently tucking away her wings and dimming her eyes. "You couldn't have wandered far from the town."

reply | flag *
message 9: by [deleted user] (new)
Dec 29, 2012 04:55PM
She looked up the moon started to show between the clouds. Thea let out a scream falling to the ground. She shifted her body ached when she looked back up her eyes were black

Zoe shot herself back, landing in a nearby tree. I knew it! She thought. Her claws dug into the tree branch she was sitting on. I could just kill her now, she would just stop changing, right? Then I could just dig in?

Zoe soon knew that she had missed her chance. There was no way that she was going to eat that thing. She bit her lip hard in frustration. She felt blood seeping down her chin, and wondered if the beast before her was a blood thirsty as She was.

Zoe smirked, and jumped down from the trees. "So, you are different " She laughed . "I thought I smelt it on you." She puffed out her wings and made her eyes start to glow again. If this beast in front of her was unstable, she might as well make herself look like someone that you don't want to fight.

♥ Mariah ~I'm a Ninja!~ wrote: ""Of course I'm different, but she doesn't know....You could say we have a split personality." Hesse said with a deranged chuckle, "And cool off I don't kill things with feathers.""

Zoe noticed what had just taken place. "I get it now" She chuckled. "I cannot believe how long that took me." She could not stop laughing. "Look we both need food, we can both hunt, we might as well do it together and you can tell me a little interesting story about how this happened." She gestured at Hessse.

Zoe tilted her head up and smelt the air. "Do you smell that?" She gave Hesse a look. "Deer. A bunch of them, just down a little. Shall we departure?"

Nicole wrote: "Rynde nodded slightly. "You have a split personality, you say?""

Zoe looked at Rynde. Her eyes started to glow in surprised and curiosity. She had never seen any one like Him before.

"Of-of course" Zoe could practically feel the authority and wisdom coming off of him. There were very few people that Zoe really respected, but she felt that he was one of those people. "Yes sir, I will try."

Zoe stood there. She was trying her best to tune out the part of her that was about to do some terrible damage to anyone around her at any given moment. She started to murmur to herself in an attempt to calm herself down, but she could feel her need for life overwhelming, She eyes started to pulse to the beat of her heart and her was shaking. She quickly slipped into the bushes and put her head in her hands,
trying not to feel anything.

Bruno sauntered through the seemingly desolate forest, currently in his lupine form in order to insure he had the potential to fight granted a threat came. In this form he stood at seven feet, which was not too different from his height as a human; 6'7.63". He walked slowly, his large paws making vivid imprints in the soft terrain.

Morgana walks through the woods wearing her black cloak blending in with her surroundings in her human form. She wasn't as hungry as she usually is.

“Whoa boy." Catalina whispered seeing her breathe curl out in front of her in the chill morning air, she felt her horse stop at her command and there was silence in the woods once more. Catalina closed her eyes and listened, she had been traveling all night in hopes to reach the village soon, she knew better then to ever sleep in woods such as this for she would surely wake up only to be half eaten by some terrible creature. She focused on Damon, feeling him breathe beneath her and knowing that if anything were near he would be the first to tell her but he seemed calm enough for now and so she opened her eyes and let out a long breathe.

She searched the ground seeing various prints many of them just regular animals but in the midst of them she could clearly pick out that of a werewolf and more than a couple human footprints she doubted were pure humans. She dismounted Damon, kneeling and evaluated the footprints closer seeing that most were fresh “It seems monsters don't hide their presence here." she said talking only to herself though her horses ears moved at the sound of her voice. Standing up she wiped her hands on her pants and shrugged “Makes them easier to find." she added turning to Damon and patting his neck before mounting him once more. She gently squeezed her legs and without hesitation Damon took off at a slow canter, his hooves nearly silent against the fallen leaves that scattered the ground.

The high pitched call of an ashen Harpy Eagle corrupted the still and dense cessation that pervaded the atmosphere. Bruno's large head sharply turned up to see his familiar friend of raptor origin. Bruno growled beneath his breath, his tail whipping furiously; the eagle never called from above like that unless she was either hunting or warning him of an intruder of some sorts. Given she was not diving down to attack anything, she had to be warning him. Bruno immediately took off at a neck-breaking speed, his keen nares sniffing the air for the foreign scent. All the while Nyx, the Harpy Eagle, was flying above him, her large wingspan doing well to keep up.

Valentine walked through the forest. Her fur was standing on end. Sge stopped and looked around, her wolf eyes searching. Her ears perked up. Sniffing the air, she knew another one of her kind was near.

Eventually but surely, Bruno slowed down to a steady gait, his body bouncing in tempo with his footfalls. Nyx swooped down and landed on his back, her large talons just barely scratching the skin beneath his fur. The scent of the foreign human being was faded and thus suggested she was far off and Bruno could calm down. For the time being, he sniffed the ground for prey but rather he found the scent of elk mixed in with the scent of yet another werewolf; this realization piqued his interest and his ears twitched to pick up sound.

Valentine stood frozen where she was. Slowly she started to turn. There was no one around her. But the feeling of another wolf was overwhelming. She started to walk, sniffing the air every few seconds.

Catalina jumped at the sound of an eagle call and Damon immediately came to a halt. Catalina had obviously trained him well, looking up she caught a glimpse of the magnificent creature, it was familiar enough she had ran across a man only a couple months ago who owned the same type of eagle. He had talked of the great hunter it was and how it had been known to be able to kill a human. She bit down on her bottom lip and tilted her head to the side, wondering why it was calling out now, knowing that they usually did so when hunting. The thought brought a small shiver running down her back, though she was sure that she could fight an eagle off it came down to that and she was more than sure a human would not be the birds first choice.

Shaking her head to get rid of the feeling of discomfort Catalina once more squeezed her legs but this time she just urged him into a slow trot wanting to be able to see something coming before it was too late. It didn't seem to help either that the presence of the bird had put Damon on the edge as his ears flicked this way and that and he let out a low snort. Running her hand through her mess of curls Catalina reached back and stroked the feather on one of her arrows, the deeper she traveled into the dark forest the more aware of her surroundings she was. Sure that she would come in contact with a monster sooner rather than later.