Around the World discussion

Mod
I sat down with my bookshelves today and made a list of what I have. It is more books than I started with last year, whoops. I definitely need to do less buying and more reading. That said, I am not aiming for 52 this year, and I won't get through everything on this list. But I was amazed to find I am flush with books set in France, Iceland, and Japan! I have some books this year that are more regional in nature, and won't feel like I need to wait on those with no goals in mind!

I'll have other challenges going too, so we'll see how many I get read from those:
Around the USA
Great African Reads
On the Southern Literary Trail
Read Across Canada
The World's Literature

Algeria
The Lovers of Algeria: A Novel by Anouar Benmalek

Angola
The Book of Chameleons by Jose Eduardo Agualusa

Australia
Death of a River Guide by Richard Flanagan

Burma
From the Land of Green Ghosts: A Burmese Odyssey by Pascal Khoo Thwe

Canada
The Saints of Big Harbour: A Novel by Lynn Coady

Central African Republic
Song from the Forest: My Life Among the Ba-Benjelle Pygmies by Louis Sarno

Czech Republic
The Book of Laughter and Forgetting by Milan Kundera

France
Hunting and Gathering by Anna Gavalda
The Book of Salt by Monique Truong
Perfume: The Story of a Murderer by Patrick Süskind
The Elementary Particles by Michel Houellebecq
Sunflowers by Sheramy Bundrick

Ghana
Wife of the Gods by Kwei Quartey

Greenland
This Cold Heaven: Seven Seasons in Greenland by Gretel Ehrlich
The Greenlanders by Jane Smiley

India
Destination: India, Destiny: Unknown, A Three Week Journey Beyond the Taj and Behind the Symbols by Bill Fitzpatrick
A Fine Balance by Rohinton Mistry

Indonesia
This Earth of Mankind by Pramoedya Ananta Toer

Ireland
Paddy Clarke Ha Ha Ha by Roddy Doyle
Are You Somebody?: The Accidental Memoir of a Dublin Woman by Nuala O’Faolain
Mothers and Sons by Colm Toibin

Israel
To the End of the Land by David Grossman

Mexico
Queen of America: A Novel by Luis Alberto Urrea

The Netherlands
The Coffee Trader by David Liss

New Zealand
One Whale, Singing: And Other Stories From New Zealand
The Bone People by Keri Hulme

Norway
Last Places: A Journey in the North by Lawrence Millman

Poland
House of Day, House of Night by Olga Tokarzcuk

Romania
The Land of Green Plums by Herta Muller

Spain
The Shadow of the Wind by Carlos Ruiz Zafon

Uruguay
The Book of Embraces by Eduardo Hughes Galeano

Multiple:
Happy Isles of Oceania: Paddling the Pacific by Paul Theroux
The Ice Museum: In Search of the Lost Land of Thule by Joanna Kavenna
Female Nomad and Friends: Tales of Breaking Free and Breaking Bread Around the World by Rita Golden Gelman
Ghost Train to the Eastern Star by Paul Theroux
The Great Railway Bazaar by Paul Theroux
The Cloud Forest: A Chronicle of the South American Wilderness
Say You're One of Them by Uwem Akpan

Mod
Judy wrote: "Impressive list, Jenny. You have more than one lengthy book listed and they all look good!"
They look good on my shelves too. I feel like a mother abandoning her young. At least the young are well organized, grouped by region. :P

Jenny wrote: "I sat down with my bookshelves today and made a list of what I have. It is more books than I started with last year, whoops. I definitely need to do less buying and more reading. That said, I am..."

Indeed a very impressive list! Small correction, if you don't mind. Patrick Suskind is actually a German writer (with umlaut in the "u", i.e. Süskind).

There are some great looking books on your list. My wishlist has grown some more!

Mod
Friederike wrote: "Indeed a very impressive list! Small correction, if you don't mind. Patrick Suskind is actually a German writer (with umlaut in the "u", i.e. Süskind). "
I will change the spelling, I just don't have ingrained shortcuts for accent marks and other notations (I missed the accent in Diaz too.) I'm keeping the book listed under France because that's where it takes place.

That is an impressive list; I will be borrowing some of them. I will be interested to know what you think about The Bone People.

I really should start getting my 2013 list organised
and review the 2012 books I haven't written about yet.

Shadow of the wind is one of my Spain choices as well. Of the few countries I have travelled to in person, Spain is at the top of our list.

Mod
Just wandered Lake Huron and other parts of Ontario in Dear Life: Stories by Alice Munro. My review is here... Alice Munro has lived in Ontario almost her entire life, and she was born in 1931, so her perspective spans decades. Almost centuries!

Mod
Instead of updating the original list of books I have, I'm going to make a new list of what I actually read. (Especially since the two lists don't have a lot alike, ha!)

Australia
On the Beach by Nevil Shute

Canada
Dear Life: Stories by Alice Monroe
Emiko Superstar by Mariko Tamaki
Sister Mine by Nalo Hopkinson
A Tale for the Time Being by Ruth Ozeki

Chechnya
A Constellation of Vital Phenomena by Anthony Marra

China
Bridge of Birds: A Novel of an Ancient China That Never Was by Barry Hughart
Five Star Billionaire by Tash Aw

Croatia
The First Rule of Swimming: A Novel by Courtney Angela Brkic

Estonia
Everything is Wonderful: Memories of a Collective Farm in Estonia by Sigrid Rausing

France
The Whole Fromage: Adventures in the Delectable World of French Cheese by Kathe Lison
Mastering the Art of French Eating: Lessons in Food and Love from a Year in Paris by Ann Mah

Greece
Dances for Flute and Thunder by Brooks Haxton

Guadaloupe
The Bridge of Beyond by Simone Schwarz-Bart

Iceland
Reply to a Letter from Helga by Bergsveinn Birgisson

India
The Lowland by Jhumpa Lahiri
Biting through the Skin: An Indian Kitchen in America's Heartland by Nina Mukerjee Furstenau

Iran/Persia
The Blindfold Horse: Memories of a Persian Childhood by Shusha Guppy

Madagascar
Over the Lip of the World: Among the Storytellers of Madagascar by Colleen J. McElroy

Russia
Pussy Riot!: A Punk Prayer for Freedom
Mastering the Art of Soviet Cooking: A Memoir of Food and Longing by Anya Von Bremzen
Sekret by Lindsay Smith

Spain
The Shadow of the Wind by Carlos Ruis Zafon

Turkey
Snow by Orhan Pamuk
Birds Without Wings by Louis de Bernieres
The Dervish by Frances Kazan
Bliss by Zülfü Livaneli
Istanbul: Memories and the City by Orhan Pamuk
Memed, My Hawk by Yasar Kemal
The White Castle by Orhan Pamuk
The Oracle of Stamboul by Michael David Lukas
The Yogurt Man Cometh by Kevin Revolinski
Istanbul: City of a 100 Names by Alex Webb
The Forty Rules of Love by Elif Shafak

Assorted
Strange Pilgrims by Gabriel Garcia Marquez
Visit Sunny Chernobyl: And Other Adventures in the World's Most Polluted Places by Andrew Blackwell (various worldwide)
Say You're One of Them by Uwem Akpan (various Africa)
A Conspiracy of Alchemists by Liesel Schwarz (various Europe)
A Universal History of the Destruction of Books: From Ancient Sumer to Modern-Day Iraq by Fernando Baez (various worldwide)

I compiled my lists from the last two years and ran it through one of those map generators: 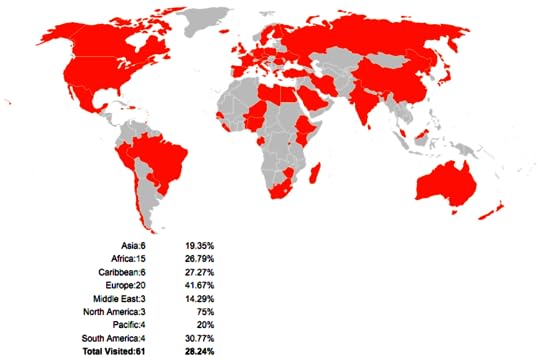 Two years into the challenge and I'm only at 28% of the countries in the world. This doesn't include a few countries that don't "officially" count but that I count (such as Tibet, Kashmir, Chechnya, books I will count separately from their official countries.)

I compiled a list of the countries I have left and put the books I have next to the countries listed. I'm not sure I can find books set in every tiny little Pacific island, and I also haven't accounted for the books I'd read prior to 2012. I'm thinking of doing so but that feels like cheating. :) Even for this map I counted a book of short stories several times (Say You're One of Them by Uwem Akpan covers a lot of the less-written-about African nations.)

I think I'll be doing this challenge for many years.

She describes her project:

"In 2012, the world came to London for the Olympics and I went out to meet it. I read my way around all the globe’s 196 independent countries – plus one extra territory chosen by blog visitors – sampling one book from every nation."

...what a neat list! The Blindfold Horse and Over the Lip of the World are the two that jumped out at me and got me to place holds at the library *right now* ...but there are so many other intriguing possibilities!

Mod
Yes I'm so jealous of her committment! I just get sidetracked too easily, plus I read a lot of books that don't fit the challenge. I'll just take my time.

Mod
Me too - although I'm not sure how I would get anything else done - life does happen - although I am envious. She has a great list of books I'll have to steal from!

Mod
I'm cross posting this with another group, but just wanted to say I have finished writing my wrap-up post for just what I did with books from Turkey. I still need to write more about around the world, but that's a start! In the end, I read 20 books from Turkey but it feels like so much more.

Read your post books from Turkey. Wow, you really did immerse yourself in the books and people of Turkey. It's enlightening to our perspective to embrace other cultures even if we can only get there through books.
I joined the World Literature group in early December and am excited to learn more about Iceland.

Mod
Jayme wrote: "Read your post books from Turkey. Wow, you really did immerse yourself in the books and people of Turkey. It's enlightening to our perspective to embrace other cultures even if we can only get ther..."

We are very glad to have you jayme! I'm looking forward to Iceland as well.

Mod
Jenny wrote: "I'm cross posting this with another group, but just wanted to say I have finished writing my wrap-up post for just what I did with books from Turkey. I still need to write more about around the wo..."

Jenny - have you read Portrait of a Turkish Family? It is one of my favorites.

Mod
Lilisa wrote: "Jenny - have you read Portrait of a Turkish Family? It is one of my favorites. "
Not yet! I have it on my to-read list though.