Mod
Follow the guidelines below, but delete the "." from the HTML format! Be sure that you don't leave anything out, and if a mod asks you to add or change anything, please do! Your characters do need to be accepted. Be creative!

Personality: She's very flirtacious and likes to mess around with a guys feelings. She can be mean and nasty to any body that she thinks is competition but she's mostly just mean and cold to everyone except her friends.
Background History: She was raised by her Siren parents and has been with them since she was 15 then she decided it was time she roamed earth on land and not just in the water. Her parents wouldn't hear of it but she convinced them by saying 'why only torture them in the water when i can be a living nightmare on land?' she won them over and she now goes from city to city.
Likes:
-Water
-Open spaces
-Messing with boys
-swimming

Clothes Style: A hoodie, t-shirt, and jeans. Leo also wears a silver pair of aviator goggles with orange lenses on his head or neck.
Personality: Leo is rather quiet, preferring not to deal with other living things if they can carry on a conversation. He lives in his head, mostly, where he comes up with designs for robots. Sometimes, he can be snarky, but mainly when he's interrupted from anything.

Background History: Leo was in an accident when he was five, leaving him with most of his skeleton replaced with metal and permanently in a half-morphed form. He doesn't know his parents and doesn't care too, preferring to move around and stay hidden. 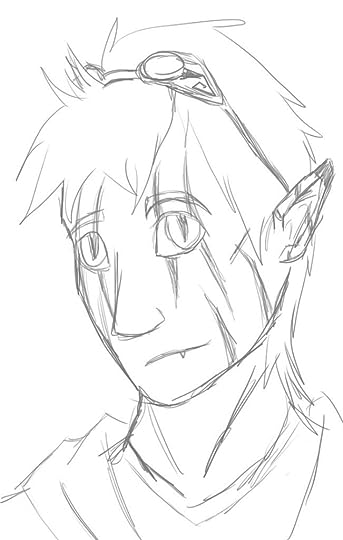 (hide spoiler)]
Leo also has giant black bat-like wings and a more lizard-like tail. His arms and legs are covered with black scales and have claws, and his wings, tail, arms and legs, instead of having black stripes, have stripes that gradually go from a light yellow to a bright orange to dark red.
Hair Color: Black and fluffy with gray tips
Eye Color: Red around the edges and yellow in the center, making an orange tint in the center. His pupils are cat-like.
Height: 6'
Weight: 110

Clothes style http://www.google.com/imgres?imgurl=h... Always wears this jacket. Reika prefers to wear casual clothing, usually wearing jeans, sneakers, and a t shirt. When she is about to do something athleticathletic or just needs to think, she ties her long, thick hair into a ponytail with a hairtie that's always around her wrist.

Personality Reika tends to be highly stubborn, and can hold a grudge for quite a while. She tends to brush off icy and sarcastic at first, not very fond of meeting others. Reika warms up eventually, but don't expect her to be affectionate to anyone. However, if any of her current allies are in trouble, she won't hesitate to throw a punch.

History Reika's real name was Paula Ratchford, but that changed after she went solo to avoid capture. Reika's mother was Gitani, a South American beauty that traveled to America at the chance for a future. In America was where Gitani met Reika's father, Paul , an American slob. After the couple were married, Reika soon entered the picture a year later. Gitani was forced to balance two jobs all week and once home was a maid to Paul. When Paula was eight, Gitani was killed in a car crash thanks to some drunk. Paula wept for days, and all Paul did was drink and gamble, arriving late to even the funeral. Not even a year had passed before he married, this time to some dumb lady that had the looks but no brain. That marriage didn't last long. over the years Paul was married twice more. Since then Paula had to fend for herself, having to scrape a living doing bike deliveries and selling candy bought at the store. A year after the third marriage and Paula's 16th birthday, Paul once again met another lady, this time a wealthy, English, widow. Having ignored her protest, Paul married the lady and before Paula knew it, they had moved to England. Feeling horribly out of place, Paula had enough of her father and annoying step mothers. Paula, now having adopted the name Reika, ran away from her dysfunctional father. determined to get back to America, she traveled, alone, across the land. On the way to the nearest port in the night, that was when she had the run in with the beast, and she prefers to not remember. Anyways, she soon made her way to America, taking the long way and showing away on a ship.

Dislikes
Being ticked off
prissy people
being center of attention
drama

species Black Shuck- A large black dog the size of a Rhino that's surprisingly athletic and agile, almost cat like. The Black Shuck has glowing red eyes and a pelt so black, she almost melts into the darkness. When approached by a Black Shuck, the air grows cold and a chill runs up your spine as you hear a growl that can't be pinpointed. It's also said that the Shuck can climb trees and spew red flames through its mouth, Reika has to be really furious though to spit fire.

Other Reika sometimes can't control her urges to shift or to shed blood, so it's best to not anger her too much. Very rarely does have to quench her hunger with human blood, you could count how many human kills she's had with with one hand. When forced to, She does her best to single out victims near the end of their life or wanting suicide.

Deep and dark brown eyes, however, when angry or annoyed they start to take on a red glow

Stands at a mere 5'2, but makes up for her height with a lean and athletic body weighing only 108

Personality: She's very flirty. She is very bubbly and gets really excited about even the small things in life. She can be kind of boy crazy, but when she has a boyfriend she makes sue to be all about him and not other boys.
Background History: She has had many boyfriends, but some of them lead her to terrible break ups. Her mom was a very strick dance/modeling mom. She mad her Dance until she bleed and model until she couldnt smile any longer. But Jacie doesnt like to model. But she loves to dance. Her parents liked to pretend that they were normal so they tryed to fit into the rest of mortals. Her dad abused her and her brother so they left there parents.
Likes:
- Dancing
- Flirting
- Life
- Cute boys
- Shopping

Species: Vampire. ( but she looks like any other human except with fangs.)
Crush: She has to many to count but she has one SUPER huge crush on...
Relationship Status: Single.
Family: Julie ( mom) Randy ( dad) Peter ( brother)
Pets: Jacky ( dog)
Other: Because Jacie was rasied to act normal she has a hard time coming completely opened to people. She is very out going. But when she gets jealous its like World War 3 is about to beginn. She can make some one wish the were never born. Darkness can take over her when Jealousy takes her over. But she is usaully so nice and sweet and likes to be friends with everyone. She has to personalitys. Her sweet, bubbly, kind, Flirty, out going side. And then her raging jealousy, dark, powerful vampire side.

Hair Color: Blonde
Eye Color: Greyish/Blue
Height: 5'3
Weight: 98 pounds
Her apperance when dark ness takes her over: http://static.desktopnexus.com/thumbn...
She looks so differant because she isnt herself. She is somebody comeletley differant when darkness is in her. She hardly even goes into the darkness.