One Piece: The Group for One Piece Lovers!! discussion

Mod
So what do u guys think of the marines or the navy??

Mod
For your information:The Marines are the World Government's military sea force, and collectively serve as one of the longest-running antagonists of the series.The duty of the Marines is to maintain a law and order throughout the world and impose the will and might of the World Government. They are therefore considered the key strategic development force in the World Government and are expected to obey its orders at will. Amongst their duties is awarding bounty hunters the bounties on the heads of a criminal. They tolerate bounty hunters as a method of making their job easier but are known to go out bounty hunting themselves. The main duty of marines duty is to catch pirates.

Mod
check out the photos for marines!!

im sorry to say but i feel that a lot of what the kaigun (marines) are bias and unfare in what they do - like there's a lot of corrupt leaders among them sadly. out of all of them i love garp the most

Mod
of course i also feel that marines are totally unfair!! most of them are really mean too!! and also most of them r really corrupt like dat guy who used to ask money frm arlong and not capture him instead..

The marines are like everyone else. Good guys and bad.

Vineeth wrote: "The marines are like everyone else. Good guys and bad."

Yeah that's what I'd say too. It's the same with pirates. Not all pirates are like Luffy and the others.
But as Kid put it, atleast the pirates don't claim to be the good guys...

The thing is that the One Piece world is actually a very hellish place to live in for the normal man. I mean imagine if the criminals outnumbered the cops in our world.
So obviously the Marines have to take drastic actions in order to preserve some semblance of order and just like in our world there will be those who abuse their powers.

The problem is that the marines themselves are ruled over by the worst kind possible(Tenryubito). So they don't really do the good of people. How do you explain destroying an entire country(Ohara), making slaves work day and night, turning a blind eye to slavery and all other horrible stuff. The World Government itself is the greatest abuser of power...

And of course the marines imply they are the good guys. The reason for almost all of their acts is protecting the people(supposedly).

Well obviously the World government is very corrupt but would you say Aokiji or even Akainu are corrupt? Is Garp corrupt?
Not at all and most marines aren't corrupt either however they are constrained from giving their best by their corrupt superiors. 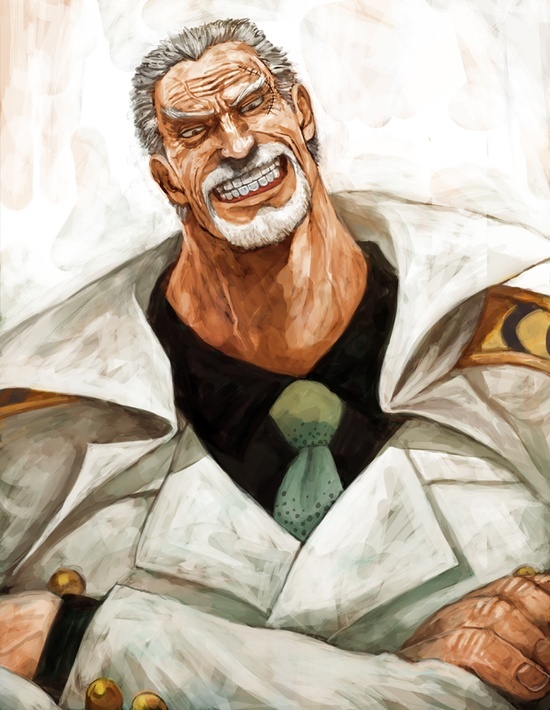 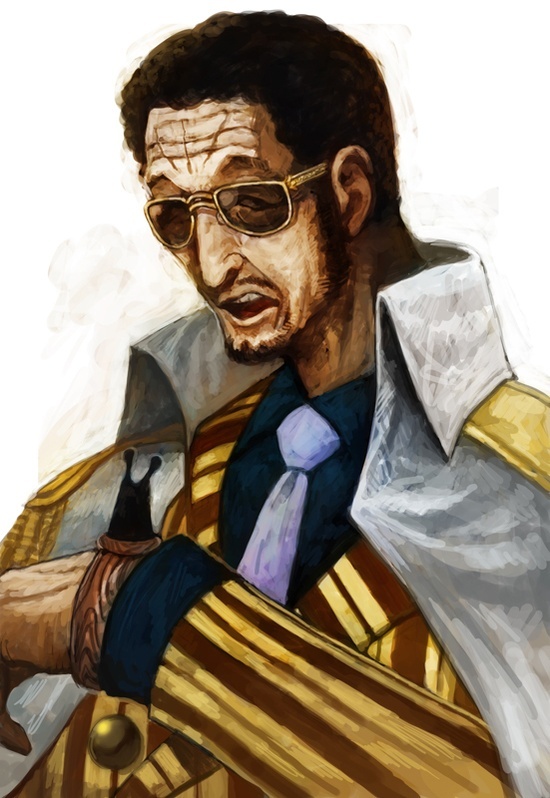 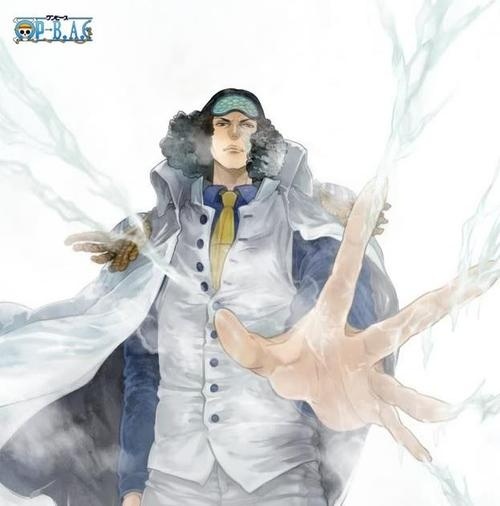 Deeptanshu wrote: "Well obviously the World government is very corrupt but would you say Aokiji or even Akainu are corrupt? Is Garp corrupt?
Not at all and most marines aren't corrupt either however they are constrained from giving their best by their corrupt superiors. "

I wouldn't call Akainu corrupt, but his sense of justice is morbidly twisted. Do you really consider killing marines who are a little scared(or even running away from a fight) justice?! I don't have any ill-feelings towards Garp, Akainu or even Sengoku(and Smoker). But I shudder to think what the Marines might have become under Akainu.

I'm not saying the marines are essentially corrupt, very few of them actually are. But my point is the same as you made in the last line. What are they really accomplishing if they let the tenryubito do whatever they want. They're not even considering changing the huge amount of power the tenryubito have and how they abuse it...

Unfortunately I dont see what they can do to the Tenryubito. Those guys have way too much power and influence and any marine who tried to fight them would soon end uop dead and if the entire organisation fought them then who would fight the pirates?

The tenryubito have power because of the marines. They don't have to fight the tenryubito, just that the superior has to have the will to against them... But they don't even consider that aspect.

They command the loyalty of a lot of other people as well. Each of them has bodyguards and personal armed forces, plus they also have a lot of political influence. Besides who do you think pays for all those battleships and guns and fancy uniforms.

Obviously, overthrowing the tenryubito gives them access to all their wealth and assets. Also, most of their bodyguards are slaves who'd readily go against them, if freed. The Marines are strong enough to overthrow any other followers of the tenryubito.

But what do you think the pirates will be doing in this time of revolution? No matter how strong the marines are to overthrow a worldwide government is not an easy task, many states will side with the tenryubito.
There will be chaos and mayhem on an unprecedented scale.
So basically in a way the pirates are protecting the tenryubito, if the land was at peace I am sure the marines and the tenryubito would be at each others throats soon enough.

That may be, but that cannot be helped. All the pirates cannot be destroyed, they are too many, and too strong. But the tenryubito are few and weak(themselves). If there are many states who will be going against the marines(if they decide to take down the tenryubito) there are much more who will actually support the decision. But I agree that it will put the marines in a very vulnerable position.
In the end, its only the pirates or the revolutionary army who can defeat the tenryubito. The least that the marines can do is not stand in their way when the time comes...

I don't think that the pirates will ever be able to completely unite against the tenryubito but perhaps Luffy can get some of the major groups in an alliance against them. But they will still probably need some support from the marines.
But frankly this is doubtful . Its more likely that the marines and the revolutionary army might make common cause to overthrow them.

Mod
Most probably the Revolutionary Army will be the ones who take action against the Tenryubito. But even if they do how strong are they? Will they be able to bring down the Tenryubito once and for all if the Marines unite with the Tenrubito?

If they were that strong they would have already done that. They need someone else to lend them support before they can even think of challenging the world government.

Mod
Yeah it'll be a really long time for the Revolutionary Army to challenge the World Government.I think some of the pirates may help them.

Sure many of them despise the world government after all. People like the Four emperors would love to see them go down into Davy jones locker.

Mod
But will they team up with the Revolutionary Army? Maybe. Hey and btw the identity of the 4th emperor is still unknown right?

Yeah its not revealed yet. They might just think they are using the rebels for their own purposes or something.

Mod
Yeah they might. I wanna see the tenryubito taken down and burnt to the ground!

The world will certainly be a lot better off if it was directly ruled by the marines.

Mod
Directly ruled by the marines? Maybe but I'm not so sure. It will be a whole lot better for sure but i dunno if it'll be too much better.

Well it cant be any worse than being ruled by the world government.

Mod
Yeah true that. A world without the World Government that would be really....?

Hmm... I'd prefer being ruled over by the marines than the World Government..

Mod
World without the World Government will really be more peaceful(ironic isn't it?)

At least they would get rid of things like slavery which are technically illegal but still prevalent amongst the tenryubito.

Oops my bad.
I edited it though.

Still not tagged.. you can mark it as spoiler by enclosing within spoiler tags.

And yeah, (view spoiler)[
That guy is cool! I'm more interested in why he decided to become an admiral at his age... His thinking is pretty ideal for a marine, worrying about the innocent people and all.. Definitely not your everyday admiral..
(hide spoiler)]

Yeah I agree with you(view spoiler)[ He seems to have a very interesting gravity manipulation type ability as well. But he already lost one of his vice admirals so lets see how well his operation goes;). (hide spoiler)]

Hmm.. (view spoiler)[
I didn't associate that attack with gravity manipulation... It wasn't explicitly mentioned what his power is, right?! (hide spoiler)]

Well, it will be entertaining XD The new chapter must be coming out anytime now...

Smoker, Tashigi and Garp are hands down my favourite Marines but I'm sure I'll gain more as I continue the series! I have to catch up again!

One Piece: The Group for One Piece Lovers!!