I would just like to say happy Christmas and happy New Year to all members of this group. And a big thank you to Declan for running this highly enjoyable group.

Looking forward to all the reads for 2013. 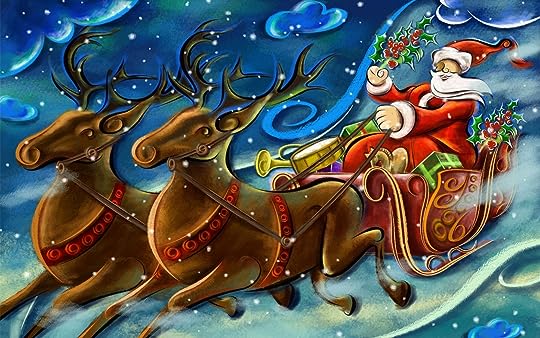 Very cheery picture, Declan. Thank you for running this group and may you have a merry christmas and a wonderful new year :)

Happy Christmas one and all!

Merry Christmas everyone! I hope you all get some great books in your Christmas stocking!

I gave my son a shopping list for our local independent bookstore and because he wasn't sure of the fastest way to get there, went with him. I sat in the coffee shop while he made his purchases. I love getting books under the tree as I constantly am buying books for myself so appreciate getting one in hand as a gift.

Yes I definitely second the thanks to Declan for running the group. I know this kind of thing can be more time consuming than you'd imagine. Specially with organising polls and such every month. Happy Christmas!

And I hope you all got some great books in your Christmas stockings. I know you did, Barbara.

You're right Declan! I got the latest installation in the Isabel Dalhousie series by Alexander McCall Smith which I love The Uncommon Appeal of Clouds and I am already on Chapter 8. I also got Bring Up the Bodies by Hillary Mantel. I have to read Wolf Hall which I bought last month before starting the second book. They'll be my next reads after the McCall Smith book.

reply | flag *
message 15: by [deleted user] (new)
Dec 26, 2012 08:41AM
I love the name The Uncommon Appeal of Clouds. I've never read McCall Smith but I must give at least one of his books a go. My ma has read a few and she would rarely read the same author twice.

I got another book token this year from my niece and nephew. I have it earmarked for Iain M. Banks's and John Connolly's latest novels. It's been so long since I"ve read any sci-fi or horror, and I think I deserve it.

Sound like good choices for new year reading! We had some snow this morning but now it's sleet and rain, a bad combination. So I may have to stay in and read:)

I want to add my name to the list of members who have expressed their appreciation for the effort that Declan puts into the Goodreads Ireland group.

As for Christmas presents of books, they are always my first choice, both for receiving and for giving. This was the first Christmas that most of the books I gave as presents were e-books. My wife and I were happy to each receive a Kindle for Christmas, and I'm getting used to the e-reading experience. I also received some "real" books: The Cellist of Sarajevo, In Defense of Food, City of Thieves and Flight Behavior.

I forgot to add that I bought 2 books for my son 100 Cult Films and Fear and Loathing at Rolling Stone: The Essential Hunter S. Thompson and they were physical books. He and a friend have decided to try to watch all films of the 100 that they haven't seen in 2013.

I spent me gift token today and bought John Connolly's The Wrath of Angels, Joseph O'Connor's Where Have You Been? and Kevin Barry's Dark Lies the Island. I intended on getting Iain M. Banks's The Hydrogen Sonata, but the last few copies were snapped up today.

The fact that I'm a fan of Connolly surprises a lot of people as I have little time for anything of a supernatural bent and most of his novels have an ominous, often malevolent, spiritual presence. I've intended to read Barry for while, but I had City of Bohane in mind. The fact that Dark Lies the Island was on special offer made my mind up for me.

I didn't actually give any books this year (unless you're willing to count a One Direction fan-book that I bought for my seven-year-old niece), but I was glad to see that my little brother and sister received some from family members. It was a dead trend when I was their age.