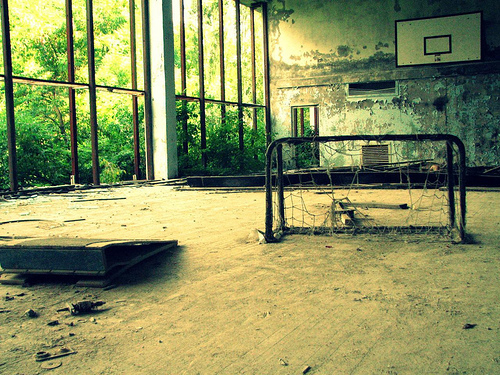 Rosalinda walked into the old gym and layed down on the old bench. She looked up at the crumbling ceiling and kept up the illusion of breathing.

Rosalinda's eyes trailed down the faded wallpaper of the decrepit building, her gaze landing on a single dent that had been firmly embedded within the wall. Her fingers composed in the air, the shape that the dent was carved in as. She wondered if it was meant to be intentional for the dent to so resemble a human heart. Even as a vampire, with access to any scientific fact could not prove to what point and by whose had that was done. It was such small details that would be what claimed her sanity for sure, a few more decades and functioning would be the least of her worries. She pulled herself to a seated position, her gaze torn from the wall, occupying itself with the outside world. The windows had been removed or broken to the point that nothing remained, either way it left small bird to fly among the rafters creating an echo that refused to cease. Her mind was unfocused, continually drawing toward the outside world. An instinct she had managed to harvest with decades of practice and patience. She focused in on the location and decided that it was time for her to do her sworn duty to her species and create order from the modern chaos that plagued her. She shut out all emotion, allowing her mind to be set on the singular goal of setting the order once again into place. She only hoped it would not be at the price of a life.

((he already left he is in his room now))

Lucas enters with an unconcious Kacy he lays her on the ground near a wall.

"Now wake up you twit."(gtg in school be on later)

"Hey I was told to bring you here he wants you."

"I want to recruit you for my special project and thank you brother."gives Lucas a high 5 and hands him some money

"Oh come now surely we can compromise something."goes to her and strokes her chin.

"Alright then Lucas strip her down and tie her up."

starts doing what his brother said at a fast speed her clothes were off and she was tied up.

Paul just stands there chuckling he thought all of this was amuzing."

She was tied up,"There happy?"

"Oh will you."Paul Slaps her lightly on her face.

"Been there done that please I will have Lucas do what you want?"

"Dont snap at me doofus."-Lucas unties her.

"Hum but I like you the way you are now."starts laughing and Lucas snickers.

She quickly grabbed her clothes and dressed before running. She felt blood dripping down her face

"You hurt me you hurt her we inplanted a pain drug so if pain happens to me she gets hurt too."


"Already been done."flicks himself in the face,blood drips from his face.

"I play to win so I want you to join me because you just killed my little brother."points to Lucas.

starts laughing manically,"You think I care about a bitch like her she is only a tool in my conquest"

"Dont hold him back come at me lover boy."