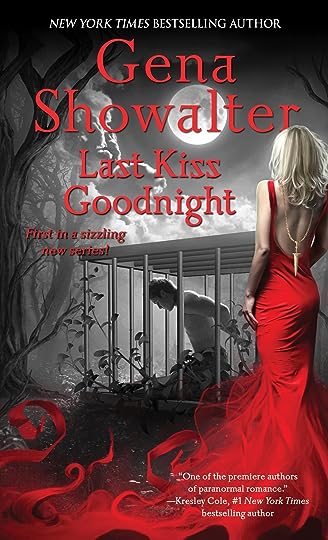 Black ops agent Solomon Judah awakens caged and bound in a twisted zoo where otherworlders are the main attraction. Vika Lukas, the owner’s daughter, is tasked with Solo’s care and feeding. The monster inside him yearns to kill her on sight, even though she holds the key to his escape. But the human side of him realizes the beautiful deaf girl is more than she seems—she’s his.

Vika endures the captives’ taunts and loathing, hoping to keep them alive even if she can’t free them. Only, Solo is different—he protects her. But as hostility turns to forbidden romance, his feelings for her will be used against him…and he’ll be put to a killer test.

I can't wait to get to this, but there are so many things I have to get through first!

I saw this advertised somewhere and thought it sounded intriguing but I'm with you. I can't start a new series until I catch up on the others I have shelved.

Mod
You know this is a spin-off to Alien Huntress? Have you read that one?

Dang it! Ill have to read those first. I think I have the first one on my nook...

I have a question in order to enjoy this book fully do I need to finish alien huntress series?? This one looks AWESOME I just want the nest experience ya know?

Good question.....I want to read this book, but I won't be able to if I have to get thru the Alien Huntress series first:-(

Mod
This is from FB.

You don't have to read the Alien Huntress books to read and understand Last Kiss Goodnight. LKG is the first in the Otherworld Assassins series (merely a spin-off of the Alien Huntress) and the book stands alone!

Good. I read the first book of the AH series and didn't care for it. Couldn't get myself to pick up book 2.

FABULOUS THANKS SO MUCH

Sarah ♥ Vutch forever ♥ wrote: "This is from FB.

You don't have to read the Alien Huntress books to read and understand Last Kiss Goodnight. LKG is the first in the Otherworld Assassins series (merely a spin-off of the Alien Hun..."


Awesome!!! Thanks Sarah :)
The cover is gorgeous... and the shallow person in me really wants it NOW!!! I liked Alien Huntress and I think I read all of the adult novels in that series but wasn't into the YA ones.

Anybody read this? I haven't had a chance yet. I did download the sample and really liked it.

Read two of her alien huntress books and hated them, but I've just finished last kiss goodnight and really enjoyed it. Looking forward to the next book release in this series.

I haven't read the Alien Huntress series yet, because the story never really appealed to me, but Last Kiss Goodnight seemed interesting so I picked it up. I must admit though that I'm very disappointed. The book was so anti-climatic I couldn't wait for it to be over already. I felt really let down by how this story turned out. There was so much potential :(
I liked the characters and the setting, which seemed so desolate and hopeless even though most of the book played in a circus. It was perfect. I'm not going to spoiler anything, but I really wasn't happy with how the book turned out.

I just got my copy in the mail that I had preordered from Amazon!!!

I'm going to start this tonight. I hope I'm not disappointed like so many of you seem to be. Is the story good? Books don't have to be NC17 for me all the time. Some stuff can be left to the imagination.

I finished this last night and I'm going to disagree with some of you. I actually liked it. It was softer, sweeter in many ways but that allowed the plot and relationship between Solo and Vika to take center stage.

There wasn't a lot of smex but it didn't need it. Too much smex is boring to me and honestly, the more smex you read, the more and more extreme it needs to become in order not to be boring. It's de-sensitizing, like too much descriptive violence.

Definitely though, if you are a fan of Gena's older work this could have been a bit of a surprise. But, I really liked Solo as a character and want to find out what happened to his friends.

I read this book yesterday. I see why so many people were disappointed with the book. Honestly, it doesn't stand out. For some reason, I still really liked it. Compared to Gena's older books, this book doesn't hold up well.

I thought it was really sweet, though. I loved watching Solo and Vika get closer and I'm really curious as to what happened to Solo's friends. I will definitely read the next book.

I see how some people like the way Vika and Solo "got to know each other". I'm putting that in quotation marks because I felt like Showalter didn't do it right.
She made them talk all right, but the dialogues were incredibly stilted and unnatural. Personally I don't think Showalter is very good at portraying intense human sentiment through dialogue when it comes to anything apart from lust, which is her forte.
Of all her books I read, what I missed most was probably "the love" - and I don't really mean love, but all feelings - grief, anger, happiness.
I never felt touched by any of the things Showalter has written, and that made this book quite tiresome to me, because I believe it was meant to touch me in a soft way but instead grabbed for my tits like pedo bear.

That's just my opinion, though, and I'm happy for those who liked the book.
I still think I'll read the next installments because I like the world so much.

Mod
Gena's reply to someone who was disapponted with "Last Kiss Goodnight".

I'm sorry you were disappointed in the new book. I write them as I'm led, and to me, Solo and Vika called for something sweet, like a fairy tale.

I liked this book but i didn't love it. But still looking forward to the next one.

I'm a new member, and even though this is an old discussion I wanted to chime in.

This was my first intro to the Alien Huntress world and I really liked it. It intrigued me enough to want to read the AH series.

I loved this book. It was such a nice change from the constant barrage of sex out there, and Solo was amazing. He was so sweet and protective of Vika, and it was just what she needed.

Looking forward to the others!

Hey all, I have been here a bit but haven't previously chimed in on this one. I am firmly in the really liked it group. I have not read the Alien Huntress series yet but I had no trouble following this.

I just loved how they were willing to do anything to protect each other...

I had heard so many mixed reviews about this book, that I put it way on the back burner, but I just read a sample of it not too long ago and it intrigued me enough to try to read it anyway. So I think this book will be the next one I purchase and try my hand at.

From what I've heard you don't need to have read the Alien Huntress series to read this book. Sorry I have no answer for your first question, I haven't read that series either!!

Stephanie wrote: "I haven't read this but tried to read the first alien assassin book and couldn't do the first person pov. Just a quick question, is the whole alien huntress series first person? And do I have to re..."

That's good to know. I *hate* first person, so I'll skip to the third one.

I do t mind first pov but I started the first book and just couldn't get into it. Don't know if its the story or the pov. Ill try the third and see what it is.