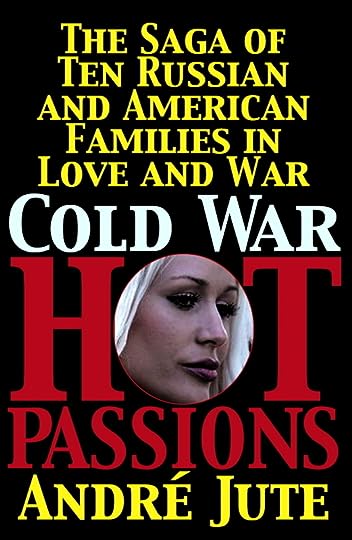 COLD WAR, HOT PASSIONS
the series
by André Jute
• around 2000 pages
• launched in eight volumes
• at the rate of one volume per month

Mod
"VANGUARD ELITE was a real pleasure to read, the writing is rock solid and flawless – every word is the right word, in the right place. The only problem I had is that the first volume of this multi-volume saga is too short. The next volume is written and awaiting publication. Bring it on."
— abrwrite/Librarything

FROM THE STORMING OF THE WINTER PALACE...

In the beginning they were impassioned young revolutionaries risking only own their lives for justice. The prince, the soldier, the peasant and the baroness became the founders of three families, steadfast in love and war, whose generations are enfolded in the sweep of humans and inhumans, inquisitors and victims, the betrayals of friends and family, the show trials of colleagues, the psychiatric tortures of dissidents, that was Russia under the Communists, right up to glasnost, when the fourth generation must answer the question, Was the result worth three generations of tragic suffering and sacrifice?

And the Americans who opposed them for liberty, the patrician Adams family, the refugee Hirches, the redneck Remptons who became political powers in the land, the McQueens who did not count the price of rising from smalltown mid-America to the highest levels of the nation, the Drexlers who had always served their country, the implacable Southern Hubbells who could — and did — threaten Presidents, and the clever Talbots whose shy Joanne married the handsome Russian who was the cleverest traitor of them all.

In his first novel for two decades, a storyteller who has always had a knack with the true history of men and women will touch your heart and thrill your mind with the risks these men and women took with their lives and their families for the ideals they were born to — which some betrayed, and some paid too high a price for in love, even with their lives.

...TO THE BITTERSWEET END
75 YEAR LATER

Mod
"I am reading VANGUARD ELITE now. So well-written, with the combination of graceful, elegant prose and tough subject matter that makes Andre one of the best around."
— Matt Posner on Facebook

Vanguard Elite is an engaging character-driven look at the Revolution that marked the beginning of the Soviet Union.

Andre Jute's Vanguard Elite focuses on a few key events before and during the "Red October" Bolshevik Revolt. True to the nature of the events, some very humble Russians get a front-eye view, alongside some more familiar names such as Lenin and Stalin. Indeed, the main focus is on a more character-driven narrative involving characters from several different backgrounds that all end up being involved in the Revolution. This is the first in a multi-volume series tracing several characters and families throughout the life of the Soviet Union. The character development is all top notch, and even many of the characters who get only brief attention still have a depth to them that makes them linger.

The exploration of the mindset of the Revolution is also quite fascinating. Some key events are alluded to, and for the others, a Revolutionary's eye view is provided. Despite the rhetoric coming from the revolutionaries the book eschewed any simplistic depiction of plucky revolutionaries versus the state. Instead, the complex nature and motivations of the revolutionaries and the sorry state of Russia at the time are explored in a way that makes the suffering palpable in an engaging way without pretending that the people who want to be in charge are as necessarily as noble or capable as some of them would like to believe. The author, in a sense, does a good job of presenting the Revolution itself as a sort of another character, and through its atmosphere and details begins to offer a commentary and explanation for what history will further bring.

Great reviews! I hope it really takes off for you, Andre.

Mod
Thanks, J. D. I have 25 years in these in these eight books. But they're already a success d'estime, and from there will build into an example of the long tail effect, a slow start but in the end much more impressive sales than any flash-in-the-pan quickseller, to become a staple of my back list. Together they're actually a very exciting, if long, story of assassins and spies, and probably the most pivotal and least known intelligence operation of all time.

BTW, every member of ROBUST is entitled to be on my publisher's advance reviewer list for new books, so if you'll drop a note to request inclusion to info at coolmainpress with the commercial extension, I'll tell them to add you. The same applies to every other ROBUSTER not on the list yet.

Is there no Goodreads entry for Terrors?

Mod
Thanks, Jeremy. This is it, newly added.