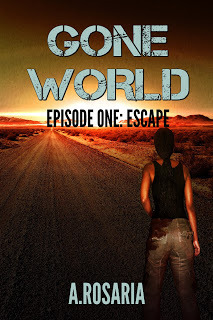 The United States of America—along with most of the world—has been left in rubble. Pockets of resistance fighters are still fighting the good fight against the invaders, the Sino-Russian Alliance.

Nick and Tina, two rebels, have narrowly escaped an ambush, but Russians still surround them. With the rebel city destroyed and cordoned off by thick walls, their chances to get out alive are slim to none.

Get it for free at Amzazon

*The first part of the series will have six installments, including this one there are four released. Episode one is free, the others cost $0.99 each. The fifth episode is being edited right now and I just finished writing the sixth.

Page on my blog with link to places to get my short story for free (Added B&N and iBooks/iTunes)
http://creationofanovel.blogspot.nl/2...

I hope to publish three more stories in this series by the year-end.

Went crazy making book covers for the Gone World series. I would appreciate to hear your opinion about them. They still a rough draft, I might have to fine tune them before I can use them.

Finished writing the sixth episode, the fifth is at the editor.