I Love My Anythink discussion

Mod
Friday I'm going to see the band Gov't Mule, who can best be described as Southern rock, but many consider them a "jam" band. The lead singer/guitarist is Warren Haynes, who is also the guitarist for the Allman Bros. and one of my all-time favorite guitar players.

As I'm getting excited for Friday's show, I started thinking about what types of music my friends and colleagues here at Rangeview like to see. So let's share! What was your first concert and what was your favorite concert? The second one is a tough one, similar to having to pin down your favorite book for some of us. But let's give it a shot!

My first concert was the Gin Blossoms at this small university outside of Reading, Pa. (People were moshing, can you believe it!) But I don't really consider that my first REAL concert because my second concert was the Grateful Dead at the Spectrum in Philadelphia. That definitely changed my life, especially since I was a very impressionable 14 years old.

One of my favorite concerts just happened two years ago, and it was when I saw Arcade Fire at Red Rocks. I was only vaguely familiar with their music, but it was one of the most incredible things I'd ever seen. They have almost a symphonic sound and the crowd was so engaged. LCD Sound System opened up for them; they also blew my mind and were probably one of the loudest bands I've ever heard. It was such an eye-opening experience for me, to be so unfamiliar with the music and still have it be one of the best concerts ever.

My first concert ever was the band, Live, in my hometown of Columbus, OH. It was the summer before I started high school and a friend's parent agreed to supervise 10 of us (which was the only way I was allowed to go).

Since then way too much time, money, and gas has gone into seeing live shows. Back in college, I'd probably go to a show a week. That number has been reduced drastically, but I still get out quite a bit. I'm more satisfied, however, with standing in the back and actually sit down when I can. I'm definitely not as young as I used to be.

My favorite show of all time was Radiohead at Red Rocks in 2003. It was the second time I'd seen them that summer, but my first show at Red Rocks, only a month after moving here. The combination was amazing! They are still my favorite band of all time by a long shot.

I was also at the Arcade Fire/LCD Soundsystem show. Incredible. We got in line at 3 in the afternoon just to get towards the front and it was well worth it. Some other recent favorites have been Joanna Newsome at the Bluebird and Fleet Foxes at the Hi-Dive.

Mod
My friend was at the Fleet Foxes show at the Hi-Dive and couldn't stop raving about them. He just gave me their album this weekend, and now I can't stop listening to it! Totally reminds me of My Morning Jacket with the lead singer's haunting voice, but it definitely has more of a folksy sound, almost reminiscent of CSNY.

Thanks for sharing Bobby. Do you think we can arrange a Rangeview staff outing to RR this summer? :)

Sounds like fun. Iron and Wine is playing with Flight of the Conchords in May. Quite the line up!

You guys should check out Blind Pilot.

I really want to see Flight of the Conchords.

I wanted to share with you that my first concert was Extreme and Mr. Big at the Paramount Theatre and that although I have seen quite a few concerts in my time, I never had as much fun as I did when I saw Barry Manilow at Red Rocks about 8 years ago. I hold my head up proudly as a Fanilow! 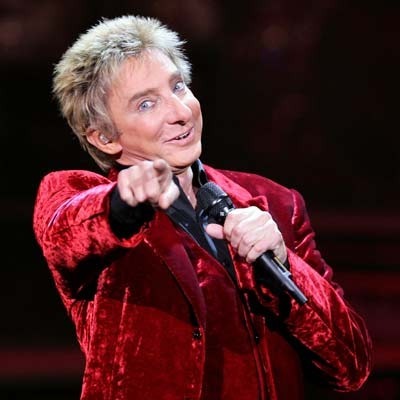 that picture is the best!!!

He looks like he's singing just to me!
Thanks Stacie!

reply | flag
message 10: by [deleted user] (new)
Feb 20, 2009 07:45PM
I've been to some great shows at Alpine Valley in Wisconsin. I'm going to join Rene on the slightly cheesy, but very fun concert scene -- Jimmy Buffett! Great show, everyone singing along, dancing, fantastic time. I also saw Ben Harper and the String Cheese Incident there in 2002. Oh, another great show was my first Red Rocks show in 2006 -- we saw Damian Marley with Ben Harper opening. I need to stop... I keep thinking of good shows, and how I haven't gone to one in ages :-(

My first concert was a free show Pearl Jam did in Seattle circa 1992 or so.. I am getting stoked for the NIN/Janes Addiction show happening in May at Fiddler's Green.

Mod
Our group really has awesome taste in music.

Katharine, what is the story behind the basket with the rose petals? Sounds interesting!

My first concert was ZZ Top in Chicago in 1990. Beards, beer, and beauties...and music too.

Mick Jaggar always danced across the stage with a basket of rose petals at the end. He threw rose petals, then the basket. I was in the 6th row.

Best concert ever - what a tough thing for me to narrow down to one! My favorite concert would have to be The Rolling Stones - sometime in the 1980s at the now defunct Mile High Stadium. I literally could not believe Mick's infectious energy and enthusiasm - I couldn't take my eyes off of him dancing around the stage. It was so fun to watch him and of course I love the music. They were so good and stood out among the other bands that were there at this all day concert in the hot summer sun in Colorado.

Unlike the Stones concert Katharine went to, no baskets of rose petals at this concert....or maybe I just missed it!

I Love My Anythink