note: This topic has been closed to new comments.
60 views
Archive > Babylon 5

Has anyone else seen this? Is anyone else obsessed by it? I have all 5 seasons on DVD, plus the movies. Along with GoT, it is my all-time favorite show. My fellow she-geeks, if you haven't seen this awesome show, you should. Then we can be geeky together^_^

I've watched almost all of the seasons on Netflix. It's a great show and I think it still holds up to this day

Absolutely! Husband and I great fans. J. Michael Straczynski wrote a great story, and got great actors. Loved Andreas Katsulas (G'Kar) and Peter Jurasik (Londo) and, well, everyone else!

Yay, other people! Garibaldi was always my favorite character, even tho I would have liked to kill him at a certain point.

Yay for a Babylon 5 thread here! =D It's my favourite television show ever, I watched it growing up. I've been slowly watching it again recently, the way that J. Michael Straczynski wrote and planned everything out still astounds me. The characters were fantastic too, lots of awesome quotes here and there. Ivanova was my favourite character but each character holds a special place in my heart =)

I'm watching Season 1 again right now, almost to the end^_^ I never get tired of watching it!

B5 is awesome. I think I read somewhere that the DS9 show was ripped off B5. I like both shows but the writing in B5 is really cool. My favorite character is Londo Mollari, but I really like G'Kar too and the way they are always at each other. Garibaldi is great and Invanova also. So many great characters, but Londo is the most fun I think. :) 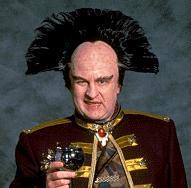 "What do you want, you moon-faced assassin of joy?"

One of my favorite Londo lines^_^

Lol! He was so sarcastic to Vir but not really mean just kind of pompous and arrogant and always funny. :)

And he did really help him out later, cus of the position on Minbar. And I don't think Vir could have ascended to where he ended up without Londo's help. Don't know the spoiler cods, and don't want to spoil anything for anyone who hasn't seen the whole series:-)

The story was so good and characters went from good to bad and back again or not. Don't want to spoiler either. So much happens with the characters its hard to even explain! Lol! :)

Londo's character arc is just amazing, I can't even begin to put into words how much I've enjoyed watching the evolution of his character and the direction his story went (same with everyone but Londo's went down a different route altogether, which was interesting). Some of my favourite funny scenes involves him too, hehe (talking about cats, complaining to Sheridan about how cold his room was, lol--good times)

Robert C. Adams wrote: "B5 is awesome. I think I read somewhere that the DS9 show was ripped off B5. I like both shows but the writing in B5 is really cool. My favorite character is Londo Mollari, but I really like G'Kar ..."

It's strange/funny how so many comparisons were made between DS9 and B5 since they were airing at the same time but I love them both (and same here, though I came to B5 later than DS9, I love B5 a lot more for its writing and the characters)

I love B5! Watched it through last year, but I already feel I could go for a re-watch, there's just so much to it.

Did anyone watch the spin-off series Crusade?
I thought it was a great idea, but not very well executed. Loved the character Galen and the whole techno-mage thing.

Batsap wrote: "Did anyone watch the spin-off series Crusade?
I thought it was a great idea, but not very well executed. Loved the character Galen and the whole techno-mage thing."

I did! I actually watched it before Babylon 5 (they were advertising it after the series finale of DS9; was intrigued--only went back to B5 afterwards). I was pretty sad that it was cancelled so early, it was promising (especially reading what was coming up for the rest of the season).

I haven't seen Crusade, recently bought it on DVD tho, and will watch it at the appropriate point in the series/movies. I'm looking forward to it^_^