Mod
Who is your favorite character?

Marilyn wrote: "Tris or Four! Four is like my dream guy, but I am exactly like Tris!"

ME TOO! Gosh I want Four to pop right out of the book so I can marry him...

Mod
I'm going to say Tris, Four, and Christina are my favorite characters. I am in love with Four!

And I wish I could meet Tris, Christina, Will and Uriah. I LOVE THEM :)

Well, I'm sorry to say ladies that is already taken...by ME!

Maybe we should see how Divergent you are to see if you're worthy....specifically in the Dauntless area. }:)

ϮAʛʛⅇℛʊℵʛ {Lerman Lover} wrote: "Maybe we should see how Divergent you are to see if you're worthy....specifically in the Dauntless area. }:)

Okay.....so how many piercings ya got?

I plan on getting mine double pierced once I move out in a few months. Mom would kick me out if I added more holes to the two I already have lol.

Mod
My mom wouldn't kill me because she has three in both ears. I just don't like the idea of shooting holes in my ears..... I'm not very Dauntless. :(

It's a mere pinch. Doesn't hurt at all. I might even get my lobes triple pierced. I just don't plan on doing my cartilage cuz that takes months to heal, and can get easily infected, and hurts like crazy for months according to one of my friends.

ϮAʛʛⅇℛʊℵʛ {Lerman Lover} wrote: "Okay.....so how many piercings ya got?"

I have my right cartilage pierced and a set on my ear lobes...I hope to get 2 more sets on my ear lobes. Oh, and I plan to get my first tattoo 9 months from tomorrow since I'll be 18 then

ϮAʛʛⅇℛʊℵʛ {Lerman Lover} wrote: "It's a mere pinch. Doesn't hurt at all. I might even get my lobes triple pierced. I just don't plan on doing my cartilage cuz that takes months to heal, and can get easily infected, and hurts like ..."

I got my cartilage done in April, and it didn't hurt and never got infected. I think it's basically how you take care of your ear

So how what thrilling experiences ya done? I've been on the Mamba, one of the worlds fastest coasters :)

Roller coasters don't scare me hahaha I went to Peru once hahaha That Was thrilling, but the kind of thrilling we're talking about is more scary thrilling. Well, last summer (2012) I've climbed up on (HMS Bounty) ship's rigging that was a little over 100 feet from water while it was moving and I climbed on the front part of the ship past Bethea (the Ship's symbol head) which is only over water. Both of them I only had a tiny little clamp to keep me from falling, but some places I couldn't and decided not to use to make moving easier so I was like, "Let's do this!!!!!!" It was fun and I'm going to do it again! 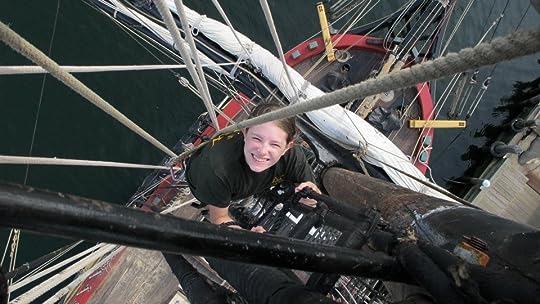 [image error]
The ship I lived on for a week. Yes, it's a tall ship!

[image error]
As you can see, we had little lines to stand on while furling the sails, which was one of my favorite things to do on the ship.

Hahaha I hope to skydive on my birthday along with getting my first tattoo next summer!

My friend skydives. I would maybe try it with him, but its SO expensive!

Haha, being Dauntless aint cheap that's for sure.

BLECH!!!! Couldn't pay me all the money in the world to do that!

Hahaha I like how we got from our favorite characters to eating worms ahahha...Now back to topic!!!!!