What did you think about this week'a reading?? 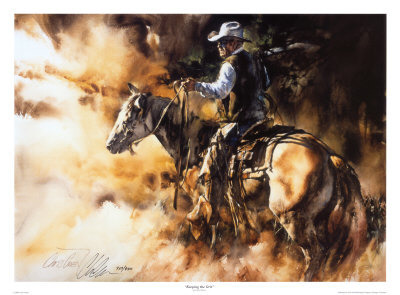 I thought Gus was clever in how he got Jake to invite Lorena along ;)
Not sure exactly why he did it though - maybe a combination of a liking for her company and a mischievous wish to stir things up?

I agree! I haven't finished the section yet, but that was quite devious of him...kinda cracked me up how Jake was so put out with her!

I think that Gus did do it because of his own enjoyment of her company. And maybe there was a part of him that felt sorry for her to be left stranded in Lonesome Dove. He knew she was not happy there, and maybe he thought it would be good for her as well to have a change and to move on to somewhere else.

I LOVE Gus! He knows exactly what women are all about and he is not about to let Jake make Lorie one of his conquests. I also truly believe he does things like offering Lorena $50 for sex or making Jake take her to Montana just to stir up trouble for pure amusement.

I did have trouble accepting how a woman that mistrusts men as much as Lorena can so eagerly believe Jake's promises of San Francisco. But I guess McMurtry warned us with his story about Maggie (Newt's mother).

Andrea wrote: "I did have trouble accepting how a woman that mistrusts men as much as Lorena can so eagerly believe Jake's promises of San Francisco. But I guess McMurtry warned us with his story about Maggie (Newt's mother).
..."

I think it has a mix of both Lorena wanting to believe it to be true and Jake being so different then anyone else she had known before, or at least seemingly so. She is used to rough cowboys who are awkward around women and Jake appears as much more confident, and slick. She seems him as being something different and so she believes that he can be the one to take her away.

I think it also is meant to be a reflection of Jake's own personality and just the way he is. As the moment he showed up in town Gus knew right away that Lorena would fall in love with him.

Gus is such an inventive guy. It is clear that he works less than anybody else, but the boys love him. And he is such a womanizer. I also enjoy reading the meditative insights into the minds of Newt, Deets, and the company. But I also think tha Jake is a weak link in the chain. First, he was the instigator of the Montana trip, and now he is trying to back up.
We are yet to meet the truly evil character in the book, but the big journey could be that challenge will separate the boys from the men and the good guys from the bad guys. Feeling apprehensive ...

By the way, we are now familiar with the inner worlds of Pea, Deets, and Newt. It would be fun to know what Bolivar's perspective is. That would possible be one of the most opinionated ones. Ha!

Bolivar cracks me up, I dont know what it is about him, but he just always seems to be wandering around in the background of scene going to the bathroom.

I was kind of breathless when I read Deets inner monologue in these sections. His reflections about riding up to the mooon and stepping on it were very childlike, but they had a darker adult motivation behind them. And when he said that he thought Gus was just "joking on him" about the world being round, you really appreciate how he and all the cowboys have just never had an opportunity to expand their world. Deets especially because he is a black man in the South. I reall yhope we continue to see a growth in friendship between Deets and Newt.

I think Lorie also recognizes that she can't trust Jake, but I think that she is over confident in her abilities to keep him interested. I think Gus saw that as well, and thats why he invited her along the trail. I think it was one of his antics, it was the fastest and surest way to get everyone riled. I think she is overconfident because she has been stuck in Lonesome Dove for too long with all these young hands falling desperately in love with her.

I know that silently Call had been thinking of a change, but why do you think that has suddenly latched on to Montana. He is using money as an excuse, Gus is right about that. Do you think that in his old age he wants one grand battle? Everyone seems to apprehensive about this trip, I am quite worried about who we will see fall away on the trail. It was such a dangerous job and a dangerous time that some of the characters are bound to be injured or killed.

I thought at first maybe Call wanted to escape his own history with Maggie etc ... but then he could have done that 10 years before. Could it be to do with Newt being old enough to go along? Although he wouldn't have said so, he wanted to keep Newt, so he had to stay settled until Newt was grown?

I think part of it might be he is tired of being in one place now for so long, not really doing anything. I think he does want to find a bit of action, and particularly after finding their old Mexican bandit rival had died, there would be no sort of challenge at all for them in Lonesome Dove. I think he still wants adventure and action. The prospect that there are still Indians in Montana that have not all been run off I think has got him wanting that old life.

At Lonesome Dove he spends much of this time just inventing work for him to do to stay busy, but before Jake came along with his story he never really had a reason to try and leave, nor any where to go. Jake's Montana story gave him more of a sense of purpose for leaving. It gave him the opportunity and excuse for something I think he has been wanting to do a long time.

I think that both Rosemary and Silver brought up really good points.

I wonder if the drive is supposed to secure Newt some sort of legacy.

I agree with Silver. I think that the idea was planted by Jake, but once the Mexican Bandito was dead Call had no challenge left at Lonesome Dove, so Montana started looking REALLY good...new challenges, different work.

Silver wrote: "I think part of it might be he is tired of being in one place now for so long, not really doing anything. I think he does want to find a bit of action, and particularly after finding their old Mexi..."

Yes, and not only adventure and action, but a Project. His personality revolves around work - and he craves work with meaning - a goal, a target, a destination. I love the way we see more complexity in him as the story moves along. Whereas we got Gus' personality full force from the very first chapter, Call is only now starting to come out of hiding, into the limelight.