Hi everybody! I'm looking for reviewers for the first book in the Sky Ghosts series,
Sky Ghosts: All for One
I have 20 ebook copies available in all formats (mobi, epub, pdf) in exchange for a review on Amazon/Goodreads. If you like the book, you can also sign up for ARC and read the whole series for free months before the release.
Here's the synopsis: 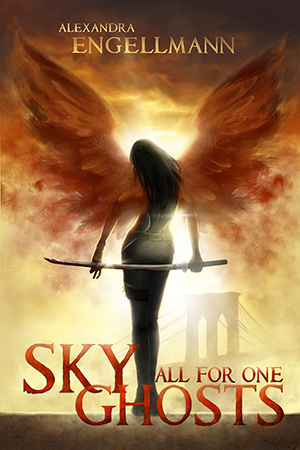 Under the cover of night, unseen in their black gear against the black sky, there are Sky Ghosts - warriors and assassins, who have been hiding among humans for centuries, revealing their supernatural abilities only to the human elite. They are bodyguards of the highest level and protectors of their cities at night, when they hunt those who chose the dark side, Sky Beasts.
In New York City, there are two fighters that Sky Beasts hate more than anyone - Jane and Pain, two sisters who don't think twice about beheading a Beast or two. One night, they save two boys from their enemies' blades, and since that moment, their lives are effectively ruined. The whole Sky Beasts gang is now after them, and not only the boys are in danger, but everybody the sisters love and care about.
As a war threatens to break out, the main mystery remains unsolved: why would the Beasts hunt two ordinary human boys?

Sky Ghosts: All for One is the first book in the Sky Ghosts series that won't leave indifferent fans of sword fighting, fantasy romance, and the woman warrior genre.

If you'd like to review the book, please, send me a message/email (Alex.engellmann@gmail.com) Don't forget to include your preferred ebook format.

All for One (other topics)