Mod
1. Suor Maria Celeste repeatedly asks Galileo for money in her letters, often apologetically. How does the tone and assuredness of these requests change over the course of the correspondence? Do you think Galileo was generous with his daughter? Is there any evidence that he refused any of her requests? How well did she manage his affairs when he was in Rome answering to the Holy Office of the Inquisition?

2. How do you envision the day-to-day routine in San Matteo in the years that Galileo's daughters lived there (see especially chapter 11)? Which of its deprivations were most trying for Suor Maria Celeste and her sisters in faith? How did a woman who never left the convent become so well-versed in the affairs of the world?

3. Under pressure from religious groups, the Kansas State Board of Education decided in 1999 to remove evolution and the big bang theory from the state-mandated curriculum. The move was opposed by a group named FLAT (Families for Learning Accurate Theories), a reference to the idea that the earth must be flat. Discuss the conflict between science and religion in Galileo's lifetime and ours. How have religious beliefs affected public policy concerning genetic engineering, cloning, and education?

4. Galileo's correspondence with his daughter reveals the value of many items in Renaissance Florence, from wheat and wine to thread and wedding dresses to Vincenzio's monthly allowance. Which were relatively costly, which inexpensive? How did their price compare to the value of a good farm, Galileo's first salary as a math professor, his rent in Bellosguardo and Arcetri, and the cost of a private room in the convent?

5. Why did Pope Urban VIII, once Galileo's ally, ultimately turn against him? How did external factors (the Thirty Years' War, alliances with France and Spain) affect his relationship with the scientist?

6. Galileo seems to have suffered from hernias, gout, and glaucoma. His elder daughter was plagued by headaches and tooth decay, and the younger may well have experienced major depression. How were these medical illnesses regarded during their lifetimes? What kind of home remedies did they use? How were doctors and surgeons regarded by the public at large and by Galileo?

7. The bubonic plague has been known for at least 3,000 years, and in the Middle Ages it depopulated entire cities. How did it touch the lives of Galileo and his family? Today plague still occurs in remote parts of Asia, Africa, South America, and even parts of the United States, but most cases can be treated with timely doses of antibiotics. What sorts of remedies—chemical, herbal, and religious—did Galileo and his daughters use to ward it off?

8. Galileo was famously wrong in his explanation of what causes tides. He thought, in essence, that the spinning of the earth caused the waters to slosh about their basins. Why did he dismiss the observation of his contemporary Johannes Kepler that the tides were related to the movements of the moon?

9. How do you think Galileo would react to the news that Pope John Paul II had called for a reexamination of his affair?

10. Given the suggestion in one of Suor Maria Celeste's letters that she wrote out the final manuscript for Galileo's Dialogue, how do you imagine the two of them might have worked together? How do you think each of them expected the final product to be received?

11. Viewed in this age of televised court cases, what did you think of the legal process of Galileo's trial?

Mod
Maria Celeste was a saint. Given to the convent at a very young age, she lived a life of sacrifice yet the letters she wrote her father told of little complaint. There were times she mentioned hunger, sickness, and cold but she seemed to accept the cloistered lifestyle fairly well. Her style of writing was eloquent and reflected her intelligence. The love and devotion she had for her father was tremendous and left me with the impression that he must have nurtured her well though her childhood days. He certainly provided for her needs when she had requests for food or money. I wish the letters he wrote to her had survived too.

Galileo's scientific mind and astronomical observations were amazing! I can picture him at work very clearly with the detail in this book. I imagine when Maria was growing up she learned a lot from watching her father and hearing his theories and discoveries explained first-hand. I believe he was the kind of dad that took time to explain things and teach his children.

The days of the Black Death where horrific and the disease was greatly feared. Isolation in the convent kept the nuns safe for the most part, but the lack of food probably did make the territory less appealing to rats. I thought the plague doctors were frightening in their uniforms. I'm considering an outfit like they had for next year's Halloween costume. 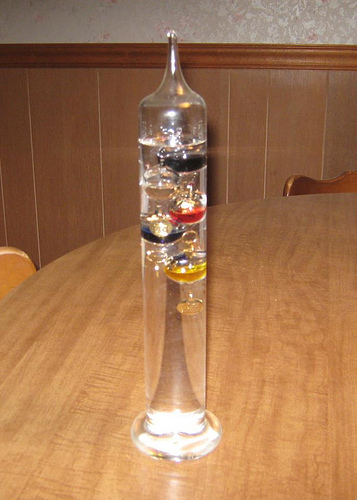 This is cool ... my grandma had this "thing" sitting on the window ledge over the kitchen sink. When I started reading this book I realized what it was. This is a replica of Galileo's thermometer!

It is cold here in the mountains, so all the floats hover around the top of the cylinder. The float that sinks the lowest is supposed to represent the temperature. The gold tag hanging from each float tells the temperature. The one in this picture says it is 64 degrees in here!

This is cool ... my grandma had this "thing" sitting on the window ledge over the kitchen sink. When I started reading this book I realized what it was. This is a replica of Galileo's therm..."

This is cool ... my grandma had this "thing" sitting on the window ledge over the kitchen sink. When I started reading this book I realized what it was. This is a replica of Galileo's therm..."

I had one of these (not sure what happened to it) and had forgotten it was Galileo's thermometer. Thanks for the reminder.

We also have one of these and I didn't know it was Galileo's thermometer!

I enjoyed the book and was thoroughly educated about Galileo in the process. At first, it didn't mention his daughter all that much but later she became a major character. Liked this book much more than Cleopatra's Daughter.