This topic is about Jay Bell
note: This topic has been closed to new comments.
18 views
Author Spotlight - book excerpts > Jay Bell - September 23, 2012

Jay Bell never gave much thought to Germany until he met a handsome foreign exchange student. At that moment, beer and pretzels became the most important thing in the world. After moving to Germany and getting married, Jay found himself desperate to communicate the feelings of alienation, adventure, and love that surrounded this decision, and has been putting pen to paper ever since. 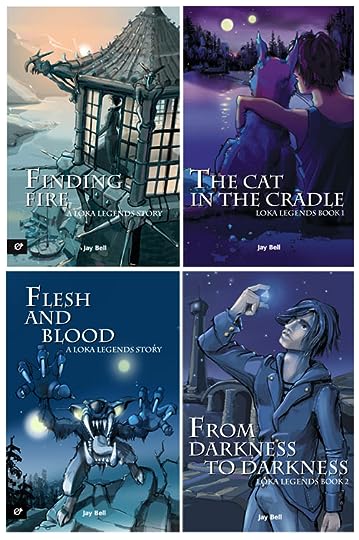 Being the son of the world’s most powerful magic user should mean a life spent in safety and comfort. Funny then, that Dylan is always on the run for his life. Werewolves, dragons, wyverns, and mad magicians—Dylan seems to run headlong into trouble, even when he’s trying to get away. Luckily, his talking cat Kio always has his back. As if the monsters weren’t enough to deal with, there are also the men in Dylan’s life, from arrogant Rano to the mysterious Tyjinn. Compared to reconciling his feelings, dealing with monsters is a cakewalk.

Loka Legends is a fantasy series with themes of gay romance. The series currently consists of two full-length novels illustrated by Andreas Bell, the author’s husband, and two short stories. The first story in the series, Finding Fire, is available free from most online retailers, and also includes a collection of concept art and rough sketches.

Reading order:
Finding Fire
The Cat in the Cradle
Flesh and Blood
From Darkness to Darkness

Buy Links: The Cat in the Cradle: Smashwords - all formats ; Barnes & Noble ; Amazon

The trap was set, the victim fast approaching. Booted footsteps neared at a steady pace, no hesitation in their gait, no instinctive warning of impending peril. Okay, maybe “peril” was laying it on thick, unless a sudden downpour could be considered dangerous. From over the edge of their hiding place—an old stuffed chair—Dylan glanced upward to an ancient leather helmet balanced on a slightly ajar door. The helmet had probably once saved its owner’s life in some long-ago war, but now it was turned upside down and filled with water.

“Dylan?” called a voice from the hall.

That wasn’t right. The voice was much too deep.

“Answer him,” Kio said, snickering madly next to Dylan.

Instead of doing so, Dylan tried to communicate his confusion by pulling a face. Kio only rolled his eyes and did an admirable imitation of Dylan’s voice. “I’m in here!”

The footsteps came closer and more rapidly now. Dylan swore he could hear fingers brushing against the door before it swung open. He had a brief impression of broad shoulders and a strong jaw before the helmet toppled and fell straight onto the stranger’s head, landing there at a lopsided angle with a splash of water.

Kio was already howling with laughter, but Dylan stood up straight, pulse quickening as he rushed forward to apologize. Their prank had been intended for a kid, not a man. A hulking angry man, judging from the way his muscles tensed before knocking the helmet off. Furious grey eyes locked onto Dylan’s through locks of wet crimson hair.

A short pudgy kid with fuzzy red hair: That’s who Dylan had last seen four years ago. He figured Rano would be taller and maybe a little heavier, but not— “Look at your muscles!”

Dylan winced at his clumsy words, but Rano’s anger turned to amusement.

“Impressive, aren’t they?” he said, reaching Dylan in two great strides. “Just wait until you feel their power!” Rano’s arm darted out, wrapped around Dylan’s neck and pulled him down into a headlock. When Rano flexed his bicep, Dylan feared his head would pop off completely.

“Acccckk!” he managed to say.

Rano released him, scouring the room as Dylan stumbled to find his footing. “Where’s that ugly dog of yours? No doubt this was his idea!”

Kio strolled from around the chair. He might be the size of a hunting dog, but Kio was definitely a cat. Grinning broadly to show off his sharp teeth, Kio let his claws click meaningfully on the floorboards. No headlocks for him! Instead Rano crouched down and ruffled the white fur on the cat’s head.

“Go on,” Rano prompted. “Say something.”

Rano guffawed, standing again and turning to face Dylan. “So weird. I’ve told everyone back home about him, but no one believes me.”

Dylan just stared. The cheek bones, the jaw, the strong brow… where had all that fat gone? Blood rushed to Dylan’s face for reasons he didn’t quite understand.

Rano reacted similarly, becoming self-conscious. “My hair,” he said before snapping his fingers. Wind came from nowhere, rushing up the sides of Rano’s face and blowing the water from his short locks. When it ceased, his hair was merely damp instead of soaked, and was sticking up in all directions. It looked surprisingly good.

Then that had also changed. When they were younger, Dylan and Rano had often commiserated about not being about to live up to their fathers’ expectations. At the time it had been a great comfort, but Dylan suddenly felt insecure. Rano was only a few years older than he was, but Dylan couldn’t imagine mastering his magic—or looking so masculine—by the time he was that age.

Rano raised an eyebrow. “Did you invite me all this way just to gawk?”

“You invited yourself,” Kio said.

“Oh, that’s right.” Rano plopped down on the bed. “That boat you sent for me was nice. Way better than the mule that carried me up to the Steeplands last month. I would rather have hiked, but no human can keep his footing on Grand Phoenix Peak. Not for long, anyway.”

Dylan sat on the bed’s edge. “You’ve been travelling?”

“Yeah. Up to the mountains and then down to the Eastern Sea. Saw the ghost house too, but they wouldn’t let me in. Couldn’t even knock since the door wasn’t real. I walked through the whole house like it wasn’t even there.”

Dylan didn’t have a clue about the places Rano had mentioned, but they sounded amazing. Why then had Rano come here to the Lakelands where there wasn’t anything to see, aside from lakes, forests, and farms?

As if wondering the same thing, Rano asked, “So, what are we going to do for fun?”

“Same thing you guys always did,” Kio said. “Stock up on homemade cookies, set up camp somewhere, and piss yourselves in terror listening to my ghost stories.”

Dylan laughed, feeling grateful toward the cat for the reminder of their humble past. So what if Rano had shed his baby fat and seen the world? He was still the same person, and one of the few who understood Dylan. Both were sons of powerful men, and both knew the pressure and isolation that came with that. The outside world expected them to have inflated egos and treated them accordingly, not realizing the truth. They were only human. Worse than that, they were insecure.

Dylan relaxed. He wasn’t going to start thinking like an outsider now. “You’ll have to have dinner with my father,” he said. “And of course Ada will want to see you. She’s been cooking since yesterday. Once the family is out of the way, we could slip into town, see what kind of trouble we can get into.”

Rano nodded. “Sounds good. Of course where I live, I never go into town. Everyone knows who I am, which makes it hard to have fun.”

Dylan didn’t need him to explain. The local townspeople were always giving him questions to relay to his father or gifts for him to deliver. They may treat Dylan like a curiosity, but his father Jack was a good man and loved by all. That was an awfully long shadow to live in.

“Yeah, you’re right,” Dylan said. “It’s no different here.” He looked at Kio. Behind those adorable whiskers and big golden eyes was a mind like a steel trap welded to a lightning rod.

“There’s the Dockyards—” Kio paused for a beat before adding, “—at night.”

The Dockyards once might have been just that. The Lakelands, situated where countless rivers came together, was the hub of trade for The Five Lands. As demand increased, the Dockyards had grown into a town of its own. Most of the homes there had been converted to inns catering to the constant influx and outflow of sailors and traders. Except for innkeepers and dockmasters, few lived there anymore. Most had moved north, where farm land kept them separated from the rabble who now prowled the Dockyards. Few men there lived with the consequences of their actions, since they were soon moving on again. This meant morals were tossed out the window.

“The Dockyards?” Rano said, pantomiming a yawn. “To do what, look at boats?”

Dylan shook his head. “We’ve been there before, Kio and I. My father had to pick up a shipment and took us with him. During the day it’s all hustle and bustle—”

“—but the telltale signs are there,” Kio picked up for him. “Like a tired old hooker snoring the day away, you can tell the Dockyards is saving its energy to do unspeakable things at night.”

Kio nodded. “Yeah. We even saw a dead body in the street. All anyone did was step over it.”

If Dylan remembered right, it was actually a dead seagull, which Kio had been tempted to snack on, but Rano looked so impressed that he kept quiet. Kio, on the other hand, did not.

“Of course, if you’re scared, cookies and a campfire are still an option. We won’t think any less of you. Well, not much anyway.”

“Are you kidding?” Rano casually flexed a muscle or two. “No one’s going to mess with me, and if they do, we’ve both got our magic. Right?”

You can continue reading this story (for free!) and also check out some cool art by downloading it from the following retailers: Amazon Kindle, Barnes & Noble Nook, iTunes/iBooks, and all other formats.