Collected editions:
My Madness: Selected Writings (1990, O.O.P.)
Let Me Alone and A Scarcity of Love (O.O.P. but available)

This is my one really rabid completist bid: I've read everything here but four of the Helen Ferguson-era novels, Change the Name, Stranger Still, Anna Kavan's New Zealand, and the newer biography. (19/28)

If anyone ever turns up a copy of A Bright Green Field (though I've read it), Goose Cross, Rich Get Rich, or Dark Sisters, let me know. These are the ones I still need to find.

I should probably also note that My Madness is kind of useless to the completist: it's all reprinted stories mixed with weird, chopped together versions of Sleep Has His House and Asylum Piece, plus the entire text of Ice. Though right now it's really the only place to read a brilliant story from A Bright Green Field, "The Birds Dancing".

Maybe at some point I'll hunt through the wikipedia and figure out where exactly all the uncollected stories are. (Besides the University of Tulsa, where there's an Anna Kavan archive complete with unpublished novels(?!))

I was looking at her wikipedia page yesterday, and they have this list, which you've probably already seen:

This one has "The Zebra Struck"


The Vintage Book of Amnesia: An Anthology of Writing on the Subject of Memory Loss

Once I have "I am Lazarus", I'll have read all her collected stories and it'll be time to start hunting down all the uncollected, so I'll definitely be turning to this list at that point! Particularly interested in the Horizons material of the 40s, seems like a unique milieu in British writing in general.

I'm taking the liberty of posting a link to an essay a friend of mine, Christopher O'Connell, wrote about Anna Kavan back in the late 80's or early 90's. I thought it was quite good. It was published in Chelsea (a lit. journal), but I don't think it's online.

Jim wrote: "This one has "The Zebra Struck"

The Vintage Book of Amnesia: An Anthology of Writing on the Subject of Memory Loss"

I love that anthology! Nearly every story in it is very very good.

Thanks for the link Jessica! Always excited to read more Kavanalia and scholarship.

And have you read any Kavan yet, Ali? Who Are you? would be an excellent, quick non-Ice introduction, if you wanted to start elsewhere than the norm. Beware the cries of the brain-fever birds.

Update to the Reading List: Stranger Still: The Works of Anna Kavan.

Thanks to Lily for finding this one. It seems to be mostly a work of criticism, but is also the first and only publication of four recently discovered stories from her later period!

Also: the long-awaited I am Lazarus reprint is supposedly shipping now after a year of delays, though I'm only going to believe it when I finally hold a copy in my hands.

Booth's comments to me are more like summarising the plot of each book along with some quotes than criticism.

By the way where did you guys get "The Horse's Tale" ebook?

Thanks Lily. Still sounds worth it to get the stories, though I suppose the rather surface discussion explains why this was published on Lulu. At least they're available!

Another update: Anna Kavan's New Zealand, with contains more previously unpublished stories and letters, I believe, along with biographical insight into her New Zealand period during WWII.

Her work is too hard to get a hold of for me to have any aspirations of completion, but I do definitely want to explore more of her work. I inter-loaned Sleep Has His House from the library and... wow. Do you have a favourite thus far?

I'd recommend pretty much anything from her actual Anna Kavan period, Asylum Piece on. Ice is the rare case of simultaneously most popular / most easily available / and, I think, actually most complex and developed.

Also: The Horse's Tale now has a Goodreads page!

i just finished asylum piece and i don't read it as a collection of short stories. have you read anything she wrote to indicate that she conceived of this as a work, as a modernist kind of poetry novel or to indicate she saw this the way it is being marketed and often reviewed, as a collection of stories meant to be read together or on their own? it seems to me that it is a carefully conceived cohesive whole.

Absolutely agreed. I read it as a novel as well (and listed it as such in the list above). I'm not sure what Kavan called it, but it certainly seems to function as a cohesive whole (especially the first person sections, but the middle interlude is essentially of a part too), and it was written in a pretty compressed period, post-breakdown as she was remaking herself, so it certainly seems to have been conceived of together, too. Maybe it was just easier to market it that way, as independent "stories" appeared in the New Yorker and elsewhere around that time.

oh, good! i guess that makes sense that it was easier to market the pieces in magazines by calling them "stories" at the time. it's disappointing that even now they are choosing not to market it as a novel, as if even now it's too experimental to call a novel...

If you're like me, you're probably curious about
Jennifer Sturm's biography / collection Anna Kavan’s New Zealand), which is pretty expensive at present.

In addition to 54 pages of biographical material by Sturm (her doctorate thesis, I believe), it would seem that she has reproduced and made available the 18 autobiographical stories comprising the previously unpublished Kavan collection Five Months Further, composed in New Zealand from September 1942 to January 1943.

From the Kavan archive at the University of Tulsa:

Here's another unpublished Kavan collection, from the Archive. The inclusions of "The Department of Slight Confusion" and "One of the Hot Spots"/"Lonely Unholy Shore" (later in Bright Green Field) place this as being prepared sometime between 1941 and 1958:

This leaves the following uncollected stories from Jim's list (including those in the two above collections, since those don't really make these stories much easier to find):

"Department of Slight Confusion." In Book: A Miscellany. No. 3, edited by Leo Bensemann & Denis Glover. Christchurch: Caxton Press, 1941. (collected in the unpublished The Cactus Sign)

All of the Horizon material, including Kavan's reviews of the likes of Woolf and Huxley, can be found in a trove of PDFs here.

Nate D wrote: "All of the Horizon material, including Kavan's reviews of the likes of Woolf and Huxley, can be found in a trove of PDFs here. "

Ohhh WOW. I love her too, but never saw that.

I only just found it while trying to hunt down the uncollected stories this afternoon. I haven't even had a chance to read them yet, but it's incredible that they're there!

Oh wow - thanks for finding that! What an amazing resource...

To any who have desired to see or even purchase any of Kavan's visual art, a number of originals have appeared on Abebooks. 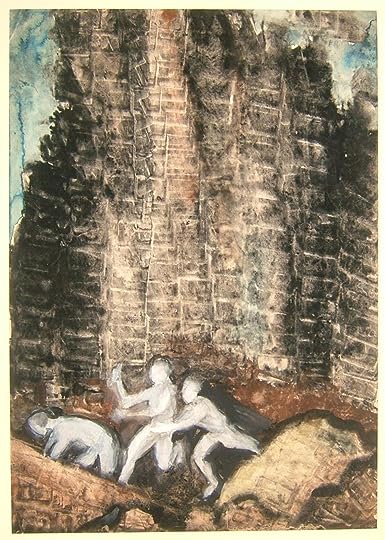 To any who have desired to see or even purchase any of Kavan's visual art, a number of originals have appeared on Abebooks.

Since this has basically become my own Anna Kavan blog at this point (and possibly the most active and up-to-date source of Anna Kavan information on the web), maybe I should just actually collect all this information in its own blog of all things Kavan-related.

I'll keep posting here as well, but I think I'm going to gradually move everything over to a permanent home on tumblr. To these ends: housesofsleep.tumblr.com

yay! anna kavanalia tumblr by nate! i hope that you'll post that first image of the chase, i love that, it feels right out of ice.

FYI, we'll be reading and discussing two of Kavan's books over in the Brain Pain group.

Please drop by and join the discussions...

thanks for the heads-up, Jim!

Jessica wrote: "thanks for the heads-up, Jim!"

join in if you have the time

reply | flag *
message 32: by [deleted user] (new)
Nov 21, 2014 11:27PM
wow, she has more stuff than i realized. i've only read four (asylum piece, ice, julia & the bazooka, parson) but her style is really appealing to me. i've seen some of her paintings & like them a lot. is her work as helen ferguson especially different from her work as kavan?

Quite. There's a definite continuity, but she altered her style and became more experimental from Asylum Piece on.

Booth's comments to me are more like summarising the plot of each boo..."

Does any one have an idea where this (particularly the stories Lily mentioned) can be read online? It looks like Lulu no longer has it :(

I recently tracked down a print version of Booth's "criticisms" (definitely more summaries) but unfortunately none of the stories mentioned by Lily (i.e. no Kavan stories) were present in the printed edition.