You were the 20th Centuries Greatest president.

Mod
There you go again, Arminius.

Jackie "the Librarian" wrote: "There you go again, Arminius."

She says, her voice all jittery.

There's a bit of an epidemic of that going around. Love is so blind.

I would love to hear your arguments against my statement. And by the way, I would rate Harry Truman second for the 20th Century but it is not his birthday.

Mod
It's understandable. Reagan did have those movie star good looks. Kinda hard for the other presidents to compete with that.

I remember I was in high school at the time. Girls...dozens of em bawling in the hallways about how tens of thousands of children were going to starve to death due to Reagan. Why? Because that's what the media told them.

It cannot be denied - Reagan was one of our greatest presidents of the 20th century, and it drives liberals absolutely insane.

Mod
I think it's upon you Reagan lovers to make a case for why he qualifies as one of the "greatest presidents of the 20th century". Once you have attempted to make your case it would then be upon us to argue against it. Proceed.

"There are no constraints on the human mind, no walls around the human spirit, no barriers to our progress except those we ourselves erect."

"To sit back hoping that someday, some way, someone will make things right is to go on feeding the crocodile, hoping he will eat you last - but eat you he will."

And you think those were his words and not those of a speech writer? 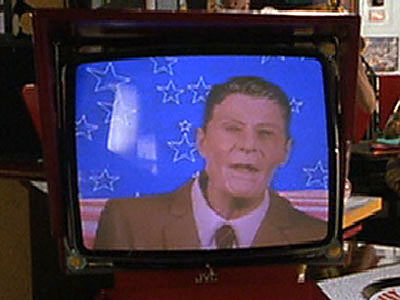 Also...Axis, take note. We are at a similar point in history. We are now embarking on exactly the opposite course that both Reagan and Thatcher took to solve the economic woes of the US and UK. In both cases, it was successful.

Here are my measures:

1. How did they respond to problems that were laid at their feet?

2. How large were the problems they had to deal with?

3 What problems did their policies create?

4. Which policies they supported solved problems?

5. Were did America wind up at the end of their presidency?

I'll comment on the Gipper's greatest role sometime in the near future.

But they are all just questions. You must provide some relevant answers to make any points with this "argument." Empty/bogus. Specious. Without merit.

Mod
It's a trap! Arminius just wants to get us all thinking waaaay more than we want to about Reagan!

Gipper's greatest role? the one with the monkey!

Well I am ashamed to say I did not know that's he came to have the nickname Gipper!

When people say that Reagan is responsible for the Soviet Union's demise, I get pretty pissed. Um, no. The Soviet Union fell apart during his Presidency, but he really didn't have a thing to do with it.

sigh. There, I had to do that, argh. Get this thread all serious, and here comes an argument.

Tell me quick! I can do it before either of them arrive!

Wasn't a monkey. It was a chimp.

Mod
Nah, it's fine, Lori. I'm just in a silly mood tonight. I'm a bit light-headed because of sinus stuff, so if anyone wants to argue, go ahead. I'm just going to stick in stupid jokes as they occur to me.

Just don't use any homonyms, though. :D

Mod
Bumbershoots, and scores one for the Gipper!

heh are you a Zippy fan? He's my husband's cousin - by marriage.

KD, what about "Bonzo goes to Bitburg?"

Ronald Reagan realized the weakness of the Soviet economy and rejected current American philosophy of peaceful coexistence.
His announcement of the Strategic Defense Initiative along with a military buildup forced a scared Soviet union to try to match America’s spending. Unable to keep up, the Soviet economy failed. This caused a loss of its ability to control satellite countries resulting in millions of people being free from communist domination.

When Reagan took office in 1980 Inflation rates were 13.5% and Interest rates were 15.75 %. Realizing that inflation was a much larger problem than interest rates, he convinced FED Chairman Paul Vocker to raise Interest rates up to 17% in order to take excess money out of the economy and thus bringing down inflation. This worked so well that inflation dropped to 4% when he left office (and it became no longer a political issue). With Inflation low interest dropped down to 9.5% and continued to drop after he left office.

In 1981 he signed the 1981 Economic Recovery Tax Act which allowed many more citizens to participate in Individual Retirement Accounts. He also brought marginal income tax rates down from 70% to 28%. This tax cut created great investment and contributed to nearly 20 millions jobs created.

One fact that enemies of his complained about was that the U.S. deficit rose to 4 trillion dollars. Some blamed that on his tax cuts but it really was the cost of winning the Cold War. The end of the Cold War reduced previously needed government military spending and let to three balanced budgets in the 1990’s.

Mod
"to take excess money out of the economy"

That is a ridiculous statement. In actuality, raising interest rates merely transfers wealth back into the hands of bankers and the already wealthy. No money was "taken out of the economy". It's not like the money was incinerated once it reached the banks.

I love how the truth is bent to give credit to Regan for any good things that happened during the Clinton Administration, and the fact that he presided over one of the greatest concentrations of wealth into the hands of the few in our lifetimes (only to be trumped by the W Bush Administration) is somehow lauded as a benefit.

Sorry Arminius, in my estimation the only thing Ronald Reagan can be credited for was standing up to the Soviet Union. It was his pet project, his main focus, and by my observation the other aspects of his reign over this country suffered dramatically. For instance, the eradication of the small family owned farms and the rise of corporate farming was one of the great tragedies of the 20th Century in this country. I directly blame RR for that.

You can lionize him all you want. By my value system, the man was a hazard.

In 1981 he signed the 1981 Economic Recovery Tax Act which allowed many more citizens to participate in Individual Retirement Accounts. He also brought marginal income tax rates down from 70% to 28%. This tax cut created great investment and contributed to nearly 20 millions jobs created.

In 1986 he signed a law that took away the IRA deduction for the average taxpayer. I remember specifically because I was one of the ones who lost that "outrageous extravagance."

Also, a very high percentage of the jobs that were created during this period were low paying service type jobs -- while most of the ones lost were higher paid industrial positions.

RR and his backers actively sought to undermine the middle class at every turn -- beginning with the air traffic controllers union bust. W took up that effort where RR left off.

Zippy and the Ramones - it's a twofer! The first rock t-shirt I got my daughter - The Ramones.

Mod
First rock t-shirt I got my daughter:

You must have been one of the few doing well (in your estimation) in the 1980's because if your IRA deduction was phased out you had to either be making more than $95000 in 1986 because for anyone making less or was not an active participant in an employer plan still received the deduction.

And all the low paying job creation does not bear out when you look at the growth of the middle class during the period.

Inflation is caused when the FED prints too much money. The way you take money out of the system is to raise interest rates. I believe this is a basic economic fact.

Also, Russian documents show that SDI was their greatest concern coming out of America and they tried to keep up. And Communist domination of the world was a real threat during this period.

Ketchup as a vegetable.

Iran - Contra is a mistake among great accomplishments. Although if I (or you) were held hostage, it is the kind of mistake that I'd want my country to make for me (or you).

Agreed Arminius. Iran-Contra..as compared to what - Mogadishu? The charge that Reagan sought to undermine the middle class is laughable. The greatest unbroken period of ecomomic expansion in this nation's history - along with the expansion of the middle class doesn't sound like undermining -unless you your desire is to keep people impoverished.

To get us out of the Carter disaster he cut govt spending and taxes - the result was increased tax revenues. Today, we are about to embark on exactly the opposite approach. The Dems are about to place a Trillion dollar bet on Keynes.

OK well I guess we could just take reality and pretend it's just the opposite of what it is. Hmmm, yeah ... that's the way things really happened. That's one of Karl Rove's tricks, right?

It involves the skillful mix of hyperbole and bullshit in order to work well. Lee Atwater was very good at it, as was Stalin. Smoke and mirrors is the common terminlogy.