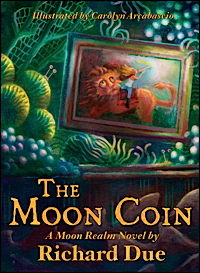 THE MOON COIN / Book One / A Moon Realm Novel

"Tales, unlike stories, never lie. You see, a tale is an account of things in their due order, often divulged secretly, or as gossip. Would you like to hear one?" —Lord Autumn

Uncle Ebb was so good at telling his tales of the Moon Realm that Lily and Jasper used to wonder if he'd been there himself. But as teenagers, they’re beyond all that—up until the moment they’re plunged into the fantastic bedtime tales of their youth. Now, armed with nothing more than memories—and the moon coin—Lily and Jasper must piece together Uncle Ebb's shattered tales and unite the fractured Moon Realm, or lose the moons they loved so much . . . all over again.

Illustrated by Carolyn Arcabascio. Volume One of the The Moon Realm Series.

Take a visual tour of the book: HERE. 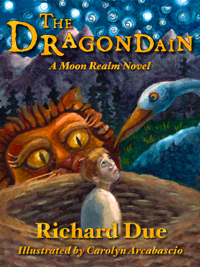 It's the middle of the night, you need to send your brother to the Moon Realm, and he won’t wake up. So you improvise. . . .

When a confused Jasper awakes, he's convinced he's dreaming. But by the time he meets Greydor, Jasper understands that this is no dream. In fact, persuading the King of the Rinn to work with the men of Dain to defeat their common enemy is a nightmare. Then there’s the other side of the coin: convincing Tavin and Dubb that saddling a Rinn isn’t certain death. (“It’ll be fun!”) And perhaps even a greater worry: can he make friends with Dubb’s daughter Darce before she punches his lights out?

Lily has problems, too. There’s a little mousie scratching in her closet. Or at least, it sounds like a little mousie. Oh, and her second confrontation with Curse, and trying to form her first peerin. (Don’t you have to be from Dain to do that?) And where’s Ebb?

Only one thing is certain. Now that Lily and Jasper have entered the Moon Realm, nothing can ever be the same again.

Illustrated by Carolyn Arcabascio. Volume Two of the The Moon Realm Series. 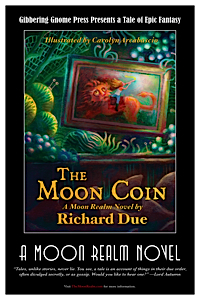 To see a larger image of the Poster design, click HERE. 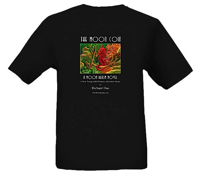 To see a larger image of the shirt's print design, click HERE.

I've gone and entered the giveaway but until then I've just got the tiniest comment. For one, I'm loving the cover art. The heavily stylized painted look takes me right back to the covers of the older fantasy books that got me interested in writing so long ago (unlike covers today which seem in love with photo manips). And with that said I would have loved a nice large glossy version of said painting as a poster/print. In my case that big black border and advert text is ruining what would have been an awesome thing I would otherwise have happily considered putting in my wall.

Well, just a bit of light feedback that. Best of luck to all other entrants!

Keiji wrote: "I've gone and entered the giveaway but until then I've just got the tiniest comment. For one, I'm loving the cover art. The heavily stylized painted look takes me right back to the covers of the ol..."

So, what about the text on the cover? Would you want that gone too?

If not, I understand completely. And I will give great consideration to making two versions: one with the advert and one without.

Personally, though, having had a life-long love affair with poster adverts, I would be sad owning a poster without the advert part—be it an automobile, a fine liquor, a bicycle, or Arm & Hammer Baking Soda. What would be the point?

P.S. have you seen the poster for book two?

No no, I have nothing against collecible advertising and I didn't mean text itself is bad. My aunt's a collector, I think my favorite of her collection is an old tin 'poster' for the original Land Before Time theater release with adverts for a discount at Pizza Hut, if you brought in you ticket stub, across the bottom.

I was simply commenting that I like the artwork so much that, for me, it alone would be worth a print. Title text on the poster itself wouldn't be unwelcome either. Thinking about it maybe its just the black border boxing in the art that's striking me as un-appealing?

I haven't seen the poster of book 2, but for what its worth I like book 2's cover more than book 1. There's a little more gong on in it and it seems a little brighter and fantastical. It evokes memories of the Neverending Story (the book, not the movie).