LISTING OF COMPLETE WORKS
Is this list utterly complete? Please supply amendments if you have any.
[I will come back to it later after seeing what other magazine articles I can find listed and anthologised.] 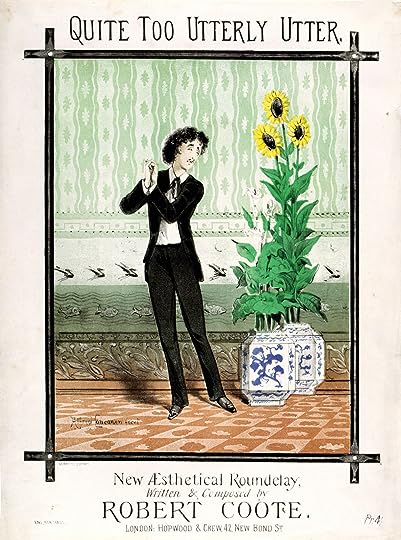 SHORT STORIES
The Portrait of Mr. W. H. (1889)
The Happy Prince and Other Tales (1888)
A House of Pomegranates (1891)
Lord Arthur Savile's Crime and Other Stories (1891) including The Canterville Ghost first published in periodical form in 1887.
Complete Short Fiction. Penguin Classics, 2003. Contains all works listed above plus Poems in Prose (1894) and one very short 'Elder-tree' (fragment)

In my late teens I read a "Complete Works" but it was a very cheap one with bad paper from one of those budget bookshops that were later mostly taken over by The Works, so I'm not sure how absolutely complete it was. Oscar would probably have despised the thing, from the off-centre badly reproduced Aubrey Beardsley cover inwards.

And then there was Richard Ellman's biography, which was wonderful.

I've had the OUP Selected Journalism sitting around for a couple of years and when I flick through, much of it seems familiar.

There are things I may not have noticed at the time: for example the anti-semitism as mentioned in this review of The Happy Prince. Or perhaps I just made excuses for Oscar - I would have: one can rarely be absolutely sure when he's serious, and whilst he was ahead of his time in some ways, we can't expect him to have been so in every respect.

I'm in two minds about the idea of revisiting an author I worshipped in my teens. I became equivocal about Stephen Fry (which was sad) and Camille Paglia (which was necessary) so it's rather nice to allow the hazy fairly-sainted memory of Oscar to live on.

I never fancied reading his childrens' stories or his plays, but certainly a Complete Works edition would make the completion process easier. He wrote surprisingly little for such a canonical titan.

OMG I may possibly qualify for this, I have his Complete Works and the Ellmann and his letters and so on.

....holy shit I don't remember anti-Semitisim in the Happy Prince.

At the same time he was being persecuted for his homosexuality and writing his Ballad of Reading Gaol detailing the terrible conditions and cruelty he suffered by imprisonment, he betrayed his best friend's plan for a small group of people to free Dreyfuss from his wrongful imprisonment and clear his name, and went further, befriending Dreyfus's persecutor, Esterhazy.

Ugh. Also, the comments on that review - deeply ugh.