Thoughts on this section?? 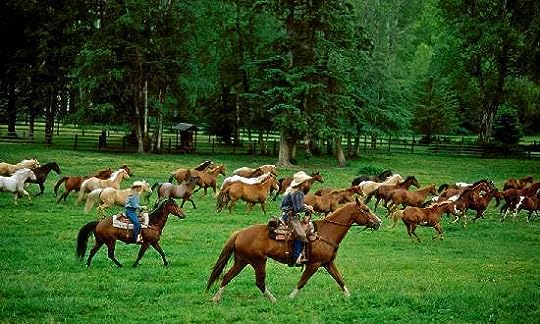 I loved the horse raid!! I also thought is was great that Newt finally got to come along on a trip! It was fun to see his excitement and fear. I know I'd have been really frightened in that stampede!! It was pretty cool how they ended up with all the horses plus the ones the Mexicans were trying to steal.

Lorena is kind of a funny woman, first she starts out being all aloof with all the men and then after one night she's in love! Should be interesting to see where he love takes her...

I liked the description of the raid but I didn't understand why it's OK for them to steal horses. Is it just that stealing is accepted because it's the only way to survive?

I think they rationalized the stealing because they were "recovering" horses from Mexico. In the book it says that Call would never steal a horse...on the US side of the border.

I'm not quite done with this section, but it just seems to me like they pass the horses and cattle back and forth across the border. It appears that they hold no real grudge toward the Mexicans, it just a sort of bizarre quid pro quo relationship. They view the Mexicans and bandits (and probably vice versa) so they're just taking back whats rightfully belonging to Americans. Like waging a mini-war of banditry.

I myself was quite surprised at the discovery that they were horse and cattle thieves considering that in those days they were serious crimes, and Call and Gus refer to themselves as being Law men from their time with the Rangers. It was strange that they would then engage in such a criminal offence themselves.

But as mentioned above, part it had to do with the fact that they were getting the horses and cattle in Mexico, and in their minds they saw that as not being the same thing as stealing horses in the U.S.

I think it will be interesting to see what happens with the curious Irishmen they have picked up.

Just finished this section. Poor Newt thought that he had been singled out by the Call, but it was really that Call had just forgoten he was there. I'm still glad to see that they all came out ok, and glad to see that Newt is so proud of himself. He stayed on top of his horse in that stampede, I'd say he earned his "manhood"

I really felt the openness of the night raid. They traveled for hours without being seen or heard by a soul... it the modern world its almost hard to imagine that vastness. Statistically, in the United States, its never possible to be more then 4 mile from a paved road.

As everybody has mentioned here, I enjoyed Newt's initiation night. It was quite a romp. And I also feel sorry for Pea - he is a lonely wrangler, and even the idea of marriage could shatter his world. Oh, well ... this is the story that should be taken with 'the pinch of ... sugar':-)

Pea's character is developing to be more complicated and interesting than what at first seemed. I started out luke warm on him because we did not know that much about his character, but I really enjoy the moments of Pea's reflections and seeing the greater depth behind his character.

Silver wrote: "Pea's character is developing to be more complicated and interesting than what at first seemed. I started out luke warm on him because we did not know that much about his character, but I really en..."

I actually find those forays into the inner worlds of his semi-cameo characters quite amusing. :-)

Its interesting because at first I thought Pea was a little slow, but I think its just that he hasnt had the opporuntity to learn how to express himself. Now I think that a lot of Pea's introspection will provide a bit of philosophic but comic release in the novel.

I really look forward to the expansion of Deets character. I was struck that Call trusted him more than the other two men, but that he couldnt rightly put a black man in charge of two whites. That makes sense for the time period and location, but it was still kind of a "oh" moment for me.

I was taken slightly aback when it turned out that they were just going to steal horses from Mexico when they didn't have enough to sell.

I remember the part where Newt was riding among the horses and thinking about the morality of theft. He justified the act by concluding that Captain Call would never do anything unlawful, and that it was more of a "game of chances" than "crime" to steal horses across the border. It's interesting that the author lets us into the scene though the boy's eyes, instead of Call's or Gus's. Where the older men might regard the raid as part of their job, Newt has a chance to question it due to his inexperience. In a way the author starts the conversation about morality with the reader by choosing the right character to tell the story. At least that's how it happened for me.

i think that Newt will be the conscious of the group a lot of the time. I remember in the first few chapters they were talking about slavery and Newt said that when he really thought about it had to admit that it was all luck who you were born, so everyone should be treated the same. I think thats a pretty illuminated idea coming from such a young man that was growing up in Texas right after the Civil War.

Andrea - yes, exactly. I loved seeing Newt's thoughts on taking the horses and how he justified it to himself. His inexperience really added something to the whole event, and I'm glad he got to go even if it was just due to oversight on Calls' part. But I think he did prove himself! Hopefully he gets to play along more often now.

Pea is an interesting character. I also thought he was really slow, but after all the talk about the marriage stuff, I think maybe he was just very sheltered and missed out on some of the social parts of life. I'll be interested to see how he changes througout the novel.

Becky - yeah the comment about not being able to put Deets in charge struck a chord with me also. Really nice details in this book to give you a feel for the times.

Catching up here. This book has grabbed me now! I forgot what a wonderful storyteller McMurtry is. He has an uncanny sympathy for and ability to portray different personalities, both men and women, from the "inside". Not to mention that the period details seem impeccable. I also like the way he describes people's thoughts in modern language, yet in a way that somehow seems to fit the period.

Absolutely. This is my first McMurty book, but I'm pretty sure after this I will be reading for more.

Andrea wrote: "I was taken slightly aback when it turned out that they were just going to steal horses from Mexico when they didn't have enough to sell."

As a result of this discussion, I'm developing a theory about the crime of horse stealing - which will be published soon as a legal treatise, with acknowledgments to the group. :)

If you look at horses as just another commodity, it seems odd that horse theft should be singled out as a hanging offense, as opposed to stealing cattle, or corn, say. But if you reflect that a horse in the old west was essential to survival, the punishment makes a lot more sense. If you steal a man's (or a woman's, but this is the old west) horse, you could be condemning him to death. He could starve in the desert, or get attacked by Indians, or suffer any number of catastrophes.

On the other hand, if you steal horses on the scale that Call et al were doing, it's not the same thing. It's much more like any other type of commercial stealing. So we have a paradox: stealing one horse, on which somebody depends for his or her life, is rightfully a hanging offense. Stealing lots of horses on the other hand, when they're being traded as mere commodities, is not nearly so wicked an act.

Interesting theory Bob! Also, don't forget that since the horse was their only mode of transportation it would be like stealing someone's only car today...