Jennifer Lavoie lives in Connecticut in the same city she grew up in. While growing up, she always wanted to be a writer or a teacher and briefly debated a career in marine biology. The only problem with that was she's deathly afraid of deep water. Starting during a holiday season as temporary help, she worked in a bookstore for six years and made it all the way up to assistant manager before she left to take a job teaching. Jennifer has her bachelor's degree in secondary English education and found a job in her town teaching middle school students. Along with another teacher and a handful of students, Jennifer started the first Gay-Straight Alliance at the school. She is also active in other student clubs and enjoys pairing students with books that make them love to read.


Visit Jennifer Lavoie at her website: www.jennniferlavoiebooks.com or email her at writerjenlavoie@gmail.com 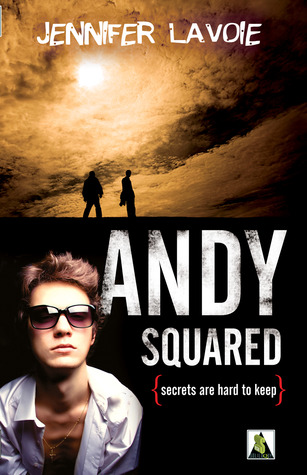 Book blurb:
Seventeen-year-old twins, Andrew and Andrea Morris, have always been close. They share everything—from their friends to a room—and they both enjoy star positions on their high school’s soccer teams. All’s right with the twins...or is it?

When new student Ryder Coltrane moves from Texas to their small New York town, he spins Andrew’s world upside down. All of Andrew’s past relationship troubles begin to make sense and his true feelings start to click into place after Ryder comes out to him. His friendship with Ryder turns secretively romantic, but secrets, they soon find out, are hard to keep. Once rumors start to fly, so-called friends turn on them, and the boys’ relationship turns into a bomb about to explode. But Andrew never expected it would be his own twin, Andrea, holding a lighter to ignite it.

Andy Squared can be purchased from the Publisher Bold Strokes Books, on Amazon, or at Barnes and Noble.

Cars and trucks only filled half of the student parking lot by the time the twins arrived at school. Andrew parked toward the back where most of the trucks were and they climbed out with their bags. Andrea waved to him and headed inside out of the cold, making a beeline toward a group of her friends. Andrew waved back and went straight to his locker.

After struggling with the combination lock for a few minutes and finally giving the locker a well-placed kick, it popped open and the contents shifted onto the floor.

Andrew stared at the pile and sighed before picking up the mess of papers. He shoved them back in the locker. I should probably clean that at some point, he thought. As he grabbed his math and history books, he heard a high-pitched shriek from close behind him, and he cringed.

“Andy! Hi! There you are. I’ve been looking all over for you this morning.” Cynthia, varsity cheerleader and current girlfriend, came running over and threw her arms around him from behind. He fought a grimace and somehow managed a smile before turning to face her.

“Oh, it’s okay. I missed you. I’m sorry I had to cancel our plans last night. My parents had to go out of town, and like, they said I had to watch Justin. Little brat got sick,” she said, making quotations in the air with her fingers.

“He’s fine. But listen, you should come over tonight, okay? My parents are going to watch his tournament and won’t be home.”

Again, he fought another grimace. “I’ve got soccer practice after school, and then I made plans with Dad, sorry. Chores and all that, you know how it is. Can’t get out of it.”

“You’re not even going to try?”

“Can’t. He needs to get it done, and I already offered to help. I can’t just back out on him.”

Andrew nodded and shouldered his bag. “Look, I gotta get to class. I’ll see you at lunch.”

Before she could protest, he took off in the direction of the office, relieved to get away. As he walked and waved at his classmates, he debated ending it with Cynthia. It’s been two months. That’s gotta be long enough. But how could he let her down without causing some sort of a scene? He snorted and shook his head. Breaking up with her was going to cause a scene no matter what. Cynthia loved drama. She lived for it. I’ll wait for the season to end. She’ll be less distracting then.

Andrew arrived at the office and opened the door. The room was pleasantly warm compared to the cooler hallways, and much quieter. Andrew approached the front desk and leaned over it. Next to him stood a boy he didn’t recognize. After a cursory glance he ignored him and pulled out the forms his mother had given him.

“Hello, Andrew. What do you have there?” the secretary asked, a bright smile on her face.

“Some papers Mom wanted me to hand in. Forms or something.”

“I’m finished with these, uh, Mrs. Conway,” the boy next to Andrew said, leaning over the desk and letting the papers drop down in front of the secretary. His arm knocked into Andrew’s as he did it, and Andrew knew it was on purpose. What a jerk, he thought as he pulled his arm out of the way and turned to leave.

“Sorry,” the boy said, turning to face Andrew. He smiled and Andrew stepped back, caught off guard by the intense green of his eyes.

Whatever else she said to the boy, Andrew didn’t hear as the heavy office door slipped shut with a soft schik behind him. He navigated the halls by slipping between the crowds of students between the office and first-period history on the other side of the building.


reply | flag *
back to top
This topic has been frozen by the moderator. No new comments can be posted.
Add a reference: