If you haven't read HOTD, basically it's a zombie apocalypse manga, about highschool students ^^

You can be anyone you want, really! But try to make them in HS.

Name: Sora Takaoji
Age: 16
Looks: http://www.google.com.au/imgres?hl=en...
History: Lived in France for a while. She knows a heap of martial arts and knows how to use weapons when needed.
Personality: She's the heroine of the story, a natural-born leader who likes to have fun and party. She's great to have around and even though she's pretty, she's never been asked out. It's a mystery to everyone.
Occupation: Year 10 student at the HS.
Crush/BF/GF: Single, perhaps not for long?
Other: 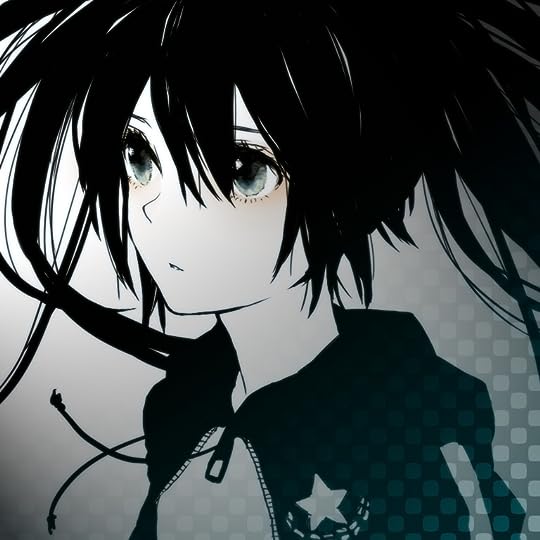 History: She's a half british, half japanese. When her mother died and came here to live with her father

Personality: She a little on the dark and gloomy side. She never shares her feelings and is the best person around for spying. She a very good shot with a gun and also good at throwing kinves, but no so much in close combat.

Name: Yamashita Takuya & Kujima Takuya
Age: 17 & 17
Looks: Yamashita on the left and Kojima on the right: 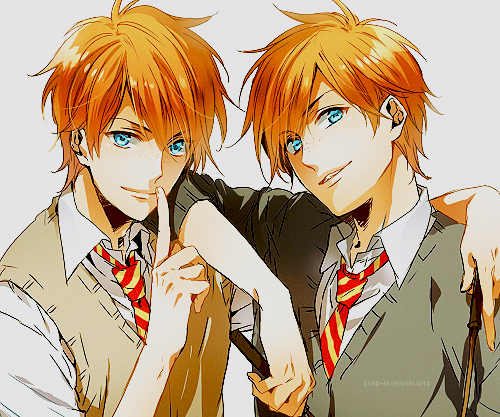 History: Both the twins are half irish half japanese. Of course their appearance comes more from their father's side. Throughout highschool they've been known for being troublemakers, or at least Yamashita has, he sort of drags Kujima with him. Surprisingly Kujima is rather intelligent.
Personality:
~Yamashita is loud and arrogant and outgoing. He's the center of attention and a complete troublemaker. Often times he's quite oblivious to being subtle in anyway and it's apparent that he often forgets he's not invincible. He's brave and rash and foolish at times.
~ Kujima is the more quiet and intellectual of the two. He's the ground to Yamashita's sky and he does his best to keep his brother on the right track. He's very protective and hates to rush into situations unprepared. He's always got some sort of game plan.
Occupation: Both Year 11 students.
Crush/BF/GF:
~ Yamashita: NA
~ Kujima: Has his eye on someone
Other: Their twins....obviously

LOVE it! ~can't wait to rp with them!

Name: Adeline (Addy)
Age: 15
Looks: http://images4.fanpop.com/image/photo... (left)
History: She was abused and almost murdered when she was younger by her father and is very shy,he doesn't talk to many people and has nighmares frequently. She needs a boyfriend or a good friend to help her out. She has cut herself before and is very depressed.
Personality: She's very shy and loves to sing and listen to music.
Occupation: She wokrs at a Coffee Shop
Crush/BF/GF: No one yet...(anyone wanna make boyfriend for her?)
Other: She has frequent nightmares.


Name: Aaron
Age: 17
Looks: http://images4.fanpop.com/image/photo... (right)
History: Is Adeline's sister and has had the same history as her minus the cutting himself and nightmares. He takes care of her, but it's not enough.
Personality: He's very helpful and out going, nice, and is a great person.
Occupation: He works at the resturaunt two doors down from the Coffee Shop.
Crush/BF/GF: None
Other: Takes care of his sister.

Name: Kendra
Age: 17
Looks: http://images.wikia.com/drawanime/ima...
History: half Greek half Japanese, lived in Greece until she was 10, and then moved to England for a while.
Personality: She has always been the independent one, sometimes the odd one out. She recently died her hair blue just to switchthings up. She is independent, free, outgoing, sarcastic, and has to get in trouble from time to time.
Occupation: year 11 in high school
Crush/BF/GF: none...yet...
Other:

Is she for Aaron? If so, could make someone for Adeline?

Carry Anne wrote: "Is she for Aaron? If so, could make someone for Adeline?"

Not necessarily, but she could be if you want...

Name:james (jim)
age:19
looks: http://1-kilometer.deviantart.com/gal... (only a sketch was taken of him)
history:half russian half american born in america he comes from a military family his father was a high ranking officer in the us navy seals at age 12 his father brought him into the seal program under a covert unit secretly know as the ucu (urban combat unit) this unit specializes in urban warfare.james has been in the program ever since and was put in japan months before the outbreak.
personality:hardened by war he will do anything to make sure the mission is complete but he will never leave a team mate behind.
occupation:a us navy seal part of a covert unit stationed in japan
crush:none..yet
other:he usually is always up the most sleep he gets is 4-6 hours of sleep he always makes sure everything is ok.

Name: Neko Black (stage name: 96Neko)
Age: 19
Looks: http://www.google.com/imgres?imgurl=h...
History: She used to be a famous singer before the out brake. She loves cats and tapioca. Family gone. She is good with a gun and hates to kill zombies, but still does it.
Personality: Funny, random, loves to sing
Occupation: Navy Seal Unit
Crush/BF/GF:
Other: Loves tapioca 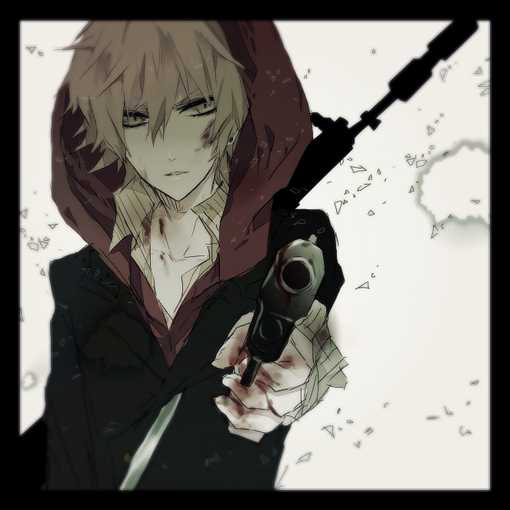 History:His parents died when he was young, so he was orphaned and grew up by himself. But ever since the outbreak he's been killing and killing for his life.
Personality:Haru is very lazy and doesn't care about anyone. He prefers to be alone, and usually is spending time practicing martial arts or kendo. He enjoys fighting, but has a fear of blood.
Occupation:High School Student
Crush/BF/GF:Open

Name: Tanya Jones
Age: 15
Looks: http://static.zerochan.net/Mary.%28Ib...
History: Batshit insane, she escaped from the Institution she was held in when the zombies broke out. Determined to start a new life, she sometimes hurts people even when she doesn't mean to.
Personality: Crazy mood swings, willing to kill anyone who gets in her way. She uses tools from an Arts Supply store she found on her way.
Occupation: Inmate at the Institution, a hospital for the clinically insane.
Crush/BF/GF: Open~

History: Gabriel is a orphan who lived in America but moved to Japan to study. He is also a Judo practicioner, before the zombie apocalypse he had attained a Blue belt. Due to him being orphan he was not very social, most of his time he spent playing video games and practicing Judo. Later he got intrested in firearms and began training with them at various shooting ranges.

Personality: Gabriel appeared to be gloomy and very serious at most of the times. Due to that people were avoiding him. But prior to the zombie apocalypse, his personality changes drastically. He is more open to people and when it comes to fighting he is full of joy. He doesn't think twice when it comes to killing zombies, be it someone whom he known or a complete stranger. He may sometimes hesitate to kill other humans.

Occupation: Highschool student
Crush/BF/GF: None yet.
Other: He can quickly learn how to use any sort of weapons and sometimes comes with his own fighting styles.

"I'm not as innocent as I seem" 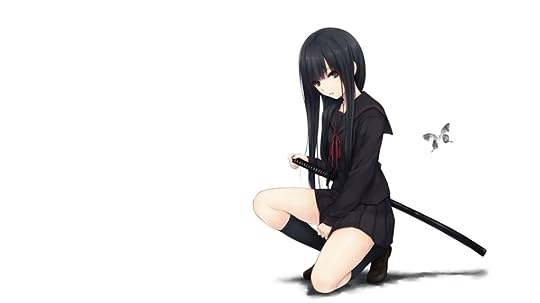 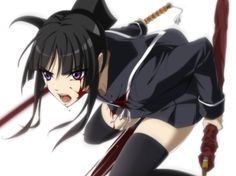 History:
Valerie's parents were both gypsies . She grew up happily with them in the woods . When she was ten, she started hearing voices in her head, one in particular. It told er to kill. Kill anything in sight. She went on a murdering rampage. However, when she saw her parents, the thought of killing them was much more powerful and she took control of her murderous instincts, however the voice has never left her since.

Personality: Valerie seems like a sweet, innocent and quiet girl on first sight. But get to know her, and she's a totally different person. She's feisty and won't back down from any challenge thrown her way. She's assertive, outspoken and sometimes arrogant. She may have the occasional angry outburst(view spoiler)[you know...swearing and fists (hide spoiler)], But she'll soon realise her mistake and apologise. She is really good at reading people's body language and she can tell if anyone is lying to her very easily.

Occupation: Highschool student
Crush/BF/GF: None
Other: She knows judo, kickboxing, karate, martial arts and can use a bow and arrow, swords and guns

"Have you ever wondered what was at her bottom of a rabbit
hole?"

Name: Ryouko Shinon Asuhara
Age: 18
Looks: http://imgur.com/a/7orQu#0
History: She is a somewhat normal girl aside from the fact that she had never been understood by a single person, her mother and father wanted the best for her and pressured her so much to the point where her whole entire being was completely a lie in her matter-- one day her parents were out on a 'buisness' trip for a whole year so she was alone and a group of gang members snuck up on her after she went to the gym and they beat her to the point of her having to kill them, when she did she ran away and moved into japan. She is a black belt at Aikido and Taekwando and knows how to use a Falcon 50. BMG. (Sniper Rifle).
Personality: She has a tsundere-tomboy Exterior and sweet and saddened interior.
Occupation: Highschool Student
Crush/BF/GF: None at the moment
Quote, "The Darkness hides my flaws but the light reveals them."

This is high school of the dead right

I know this thread is at least a couple of years old but anybody still active and want to rp HOTD ?